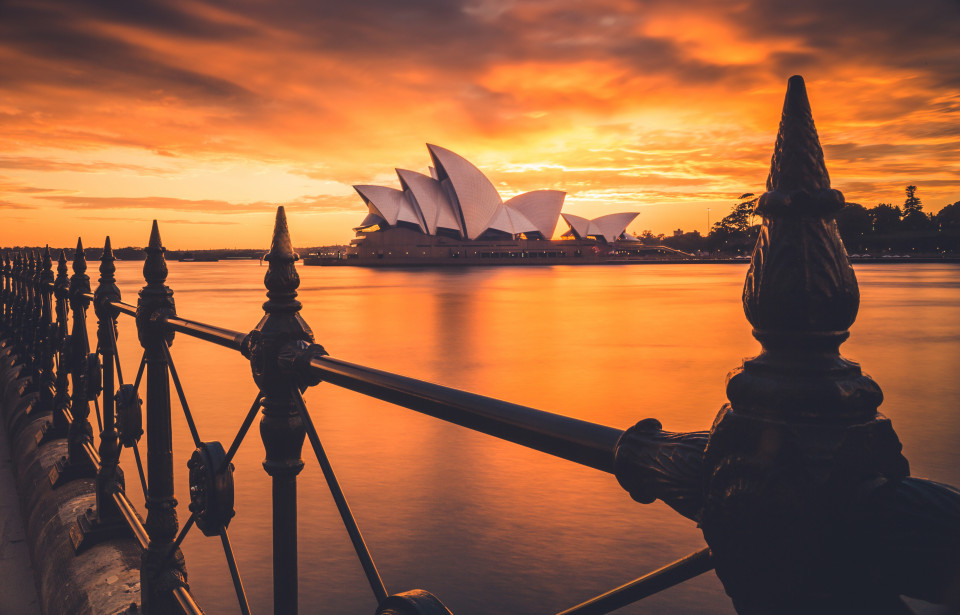 Australia’s largest city, Sydney, is so synonymous with all things Down-Under that most people believe it to be the country’s capital.

And this vibrant, cosmopolitan city certainly doesn’t disappoint such a stately misconception: from the iconic skyline, to the Sydney Opera House and Sydney Harbour bridge, it truly is a sightseers’ dream.

To skirt Sydney’s high and low seasons, in terms of both crowd congestion and climate, September to November and March to May are the best times to visit. If you don’t mind enduring the peak season, plus the juxtaposition of having the sun beat down on you during the festivities, then Christmas time onward should be in your plans.

The most famous of all Sydney landmarks are the jagged ‘yacht sails’ of the Sydney Opera House. It’s a sight to behold from the outside, but it’s best experienced by attending a concert, theatre performance or opera. If that doesn’t fit into your itinerary, then the one-hour guided tour should appease you.

The giant ‘coathanger,’ or Sydney Harbour Bridge, to you and I, is a magnificent spectacle and one worth experiencing up-close, by climbing the stairs on either coast. The popular BridgeClimb will allow you to ascend the arc, but it is a pricey addition.

You might be surprised that holidays to Sydney come with a choice of nearly 40 beaches. But simply put, in Bondi beach Sydney has one of the world’s very best. It’s the beach that comes to mind when you think of the coastline in Australia, complete with white sands and excellent surf. It’s also one of the few places in the world where you can glimpse Santa in a swimsuit.

The cuisine in Sydney is some of the finest found anywhere in the world. The top restaurants the city has to offer can be remarkably expensive, but there also a number of reasonably priced and sought-after eateries all over the city.

To enjoy your dinner with some of the best views in Sydney, you should check out Quay. And any sweet-tooth will simply love Bourke Street Bakery and the ice cream of Cow & Moon.

In a city with so much scope, it’s little wonder that all kinds of nightlife can be found within. The wine bar of 10 William Street and cocktails at Rock offer a touch of class and sophistication.

Australia’s oldest natural history museum, The Australian Museum, dates back to 1857 and displays “the natural wealth of the colony”. For a deeper look at Australia’s Indigenous heritage, look no further than the collection of 1,500+ Aboriginal rock art pieces housed by the Ku-ring gai Chase National Park. Aboriginal carvings, plus great scenery, beaches and hiking tracks can also be discovered in Sydney Harbour National Park.

With such an array of beaches and parks to chose from, it should come as little surprise that many an activity can be enjoyed here. Swimming, diving, surfing and paddle-boarding are available at most beaches, particularly Manly Beach and Bondi. Back on land, there’s everything from walking (coastal walk trails), running (Royal Botanic Gardens), cycling (cycle lanes of guided bike tours) and skating (Centennial Park).

And we’d be remiss if we didn’t at least let you know about the kangaroos, koalas and countless other furry friends just a short ferry trip away in Taronga Zoo Sydney.

Virtually everywhere in the city is accessible via the combination of bus, ferries, and rail that make up the public transport system. And if you’re partying has outlasted the services of local trains and buses, taxis offer a convenient way to get around.