Gain insight into the lavish excess of Russia’s tsars at Catherine Palace in Pushkin, a sprawling royal residence gilded in over 100kg of gold. Gifted to Catherine I, wife of Peter the Great, and carrying her name, Catherine Palace first served as the imperial summer residence of the tsar and was originally constructed in a relatively modest fashion. It was Catherine’s daughter, Empress Elizabeth, who envisioned a more opulent version of the palace, modelled on the great palaces of Versailles and Vienna.

Under Elizabeth’s instruction, the artistic hand of architect Bartholomeo Rastrelli and the disapproving eye of her mother, the palace was extended and re-designed to feature grand ballrooms, ornate hallways and perfectly aligned doorways that allowed uninterrupted views down the entire length of the palace. Large quantities of gold were used to gild the domes of the Palace Chapel and the exterior painted in its trademark blue and white. 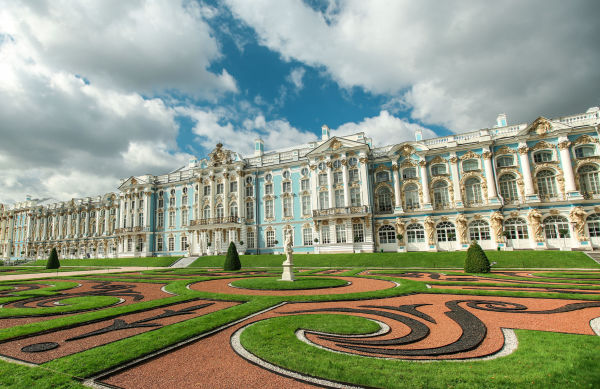 Elizabeth had grand designs for the rooms of the palace, commissioning a sweeping staircase adorned with reclining Cupids, an expansive Great Hall, a number of themed dining rooms and a Portrait Hall. The most famous room, however, is the Amber Room whose walls were covered from floor to ceiling in real amber tiles gifted to Peter the Great by the King of Prussia. The resulting effect was breath-taking, so much so that invading Nazi troops dismantled the room in 1941 and shipped its contents back to Germany where they were never to be seen again.

In 1982, the Soviet government sanctioned the restoration of the Amber Room to its former splendour, a long and costly process that took over 20 years and millions of dollars. The room was finally unveiled by President Vladimir Putin in 2003 and has become the key draw for visitors to the palace.

Visitors enter the palace via the ornately carved State Staircase, coming first to the Great Hall, designed to impress those attending its lavish balls and grand events. Covering 1,000 square metres, the hall features large, picture windows with spectacular views over the grounds, elaborately gilded mirrors and a wall-to-wall ceiling fresco entitled “Triumph of Russia”. Canvas portraits and paintings cover the panelled walls of the Portrait Hall and additional artifacts are on display in the Agate Room.

No trip is complete without exploring the luxurious interior of the Amber Room where the different forms of amber used to give the room its golden glow. While tourists may be tempted to end their tour on this high note, the precisely manicured palace gardens are not to be missed, particularly when the weather is fine.

To protect the intricate flooring, visitors are required to cover their shoes with the cloth covers provided upon entry. Great care is taken to preserve the palace and, for this reason, no photography is permitted in the Amber Room. An admission fee is charged and, unless visiting with a tour group, visitors must follow a guided tour which is conducted largely in Russian. English audio guides are available for an additional fee. Check opening days and times beforehand as the palace is typically closed one day a week and in the mornings.