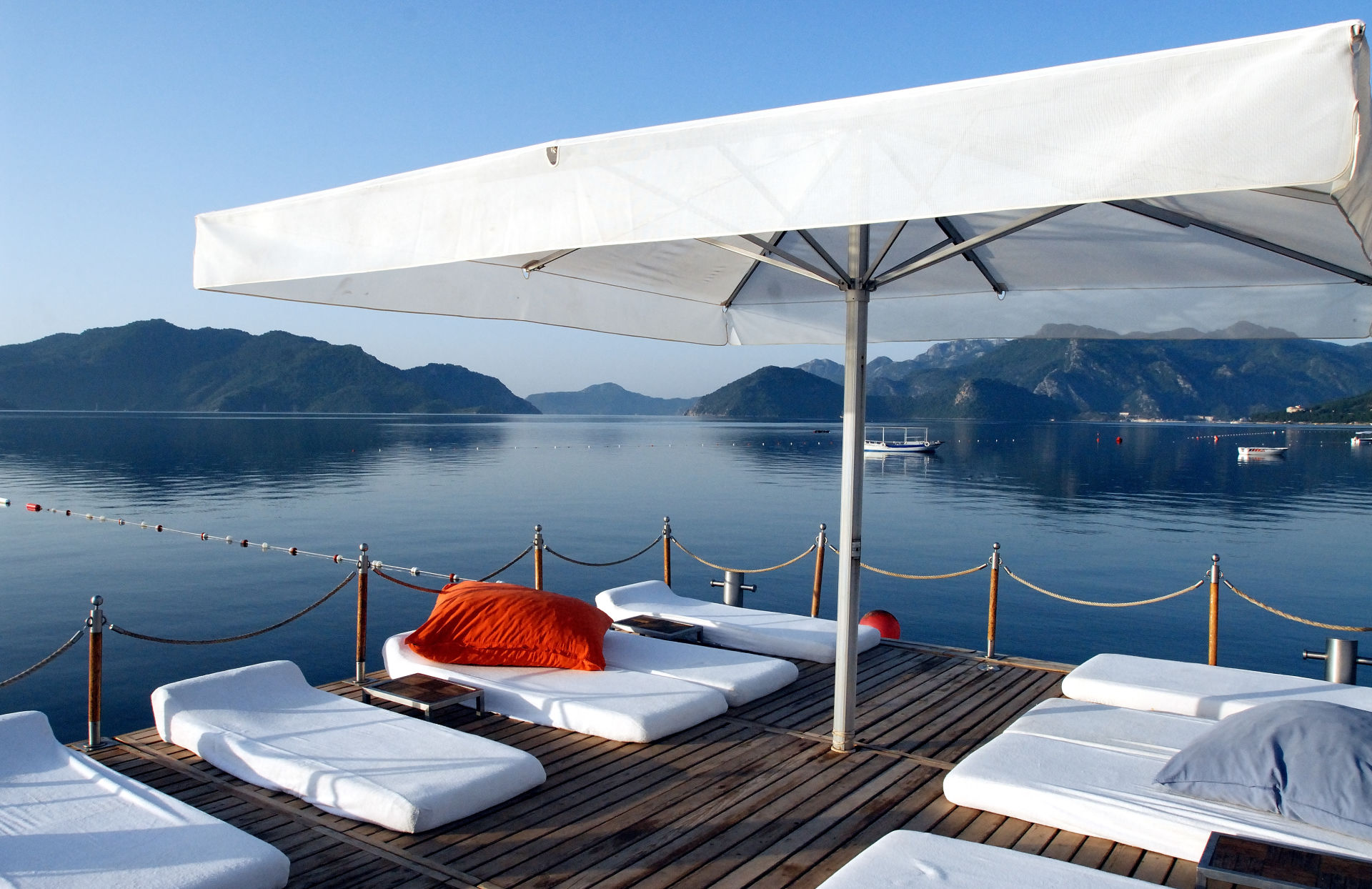 Located on a flat seaside promenade and boasting direct access to the beach, the Elegance Hotel is well-positioned to take advantage of the bay, mountains and harbour of Marmaris. Wind your way down the picturesque promenade towards the restaurants, shops and bars of Marmaris, located 2km away. Icmeler Beach, located 5km away, is popular for its stretches of fine, golden sand and sparkling, clear water.

Soak in the sunshine, forest-clad hills and sparkling waters of Marmaris from the Elegance International's Hana Beach wooden pier, which extends into the ocean giving visitors the ideal spot to take in some sun and surf, and, at night, enjoy outdoor drinks and star gazing. Make the most of the Meditteranean's year-round sunshine on a lounge chair on the beach or at one of the hotel's 2 pools, or sip on something cold at their beach bar or pool bar.

The Elegance International offers an abundance of facilities, including a spa and wellness centre, health club, selected sports facilities, watersports* and a kids' club. For those looking for some pampering, the on-site Turkish bath (hammam), steam bath, sauna and jacuzzi may be just the ticket.

With a choice of 3 restaurants and 5 bars, guests are spoilt for dining and drinking options. The beautifully decorated Bouganville restaurant offers Turkish and international culinary treats in an open buffet, and guests can opt for the à la carte restaurant at a fee.

The hotel's elegantly furnished en-suite rooms are air-conditioned and guests can make use of the mini bar (stocked daily with water), satellite TV and safe. Room service and in-room Wi-Fi are also available.

*Some facilities may incur an additional fee.

Located on a flat seaside promenade and boasting direct access to the beach, the Elegance Hotel is well-positioned to take advantage of the bay, mountains and harbour of Marmaris. Wind your way down the picturesque promenade towards the restaurants, shops and bars of Marmaris, located 2km away. Icmeler Beach, located 5km away, is popular for its stretches of fine, golden sand and sparkling, clear water.

Good but not great

The week we spent at the Elegance hotel was definitely enjoyable. The hotel is in an optimum location, positioned on the strip right next to the beach with plenty of restaurants and bars, which were extremely lively and are probably even more so outside of the pandemic limitations. Our favourite spot was “Vamos”, located about fifty metres from the hotel...

There are also loads of water sports opportunities nearby which are very reasonably priced.

The hotel contains two spacious pool areas, which both have stunning decor and a bar area, as well as a private beach and private pier, ideal for sunbathing and for swimming. One of the pools has a DJ, which created a great atmosphere. All of the staff which worked at both pool bars were absolutely lovely and always provided an efficient and friendly service. The hotel also contains a stunning spa, where we enjoyed a wonderful massage at a reasonable cost.

Our rooms were comfortable and usually cleaned daily. The only fault I can find with the rooms were that the lighting was very dim which was occasionally a struggle when getting ready during the evenings. When we first arrived at the hotel, our party’s two rooms were really far away from each other, but the hotel were very accommodating in terms of relocating us so that we could be together, which we greatly appreciated.

The drink options included in the all-inclusive package were a little bit limited - imported alcohols were not included, only local produce. This wasn’t much of an issue for us but we would have occasionally liked a bit more variety.

There were two glaring problems with this hotel for us. The first issue which we noticed immediately upon arrival was the extremely racially insensitive statue placed in the hotel’s lobby right by the front door. Displaying this type of statue by your hotel’s main entrance sets a horrific tone, and in this day and age is completely inexcusable. We even noticed on one occasion that a staff member had placed a mop in the statue’s hands, which we found downright appalling. We hope that the hotel will address this issue as a matter of urgency and hope that they see fit to replace the statue with something more appropriate or otherwise just remove it.

The second major issue with this hotel is unfortunately the food. Every meal we had at the hotel was unsatisfying and, for the most part, deeply disappointing. Without sounding dramatic, most of the food was so bad it was almost to the point of being inedible. Despite paying for all inclusive, we only ate dinner in the hotel once throughout our week-long stay. It was really disappointing as Turkish cuisine is a favourite dish of mine, and I had had much higher expectations for the quality of the hotel’s food.

Another point that is worth noting is the poor WiFi connection. Our phones would frequently disconnect from the server, pretty much whenever we locked them, and the service was very slow. In 2020, decent WiFi should sort of be a given. As we are from the U.K, our phone companies charge us a lot of money to use data outside of the EU, so a reliable WiFi service is quite essential if you want to stay connected, and the hotel’s WiFi was a frequently an inconvenience.

Overall the hotel has real potential to be amazing, but is really let down by these factors. The statue and food situation both need to be addressed as a matter of urgency, especially from a hotel claiming to be “five star”. We hope that the hotel will take on these points for improvement, as the location and pool areas are absolutely stunning and it certainly has five star potential.

Was a week-long trip to the resort town of Turkey near the sea with All Inclusive option. The hotel has rather a big territory, with a big rest zone in a lobby near entrance, two water pools (one smaller near the road, which in the evening transforms into small chillout cafe with nice music list, free cocktails and very beautiful view to the stars, palms and sea. Second, bigger, pool is situated in a quite and silent space with only one entrance point and contains micro-pool for children and small bar). There is a piano in a lobby and some evenings the pianoman plays music there. Regarding the built-in restaurant the meals are good enough...

They server 3 times a day with buffet-like style - you can pick any meal at any quantity. Also, there is 2 additional small serves - one at a bar in the big pool, and second at the very evening (23:00, never visited). The sea is really near the hotel, about 3-4 minutes by foot from the hotel back-door, but due to quarantine - there are a short of sun loungers - all are busy from the morning. Has its own small beach territory, but not closed from outsiders. All personnel uses masks and follow quarantine measures. Also they are communicative and able to solve requests, with good mood (especially the DJ Onder who made our evenings' chill out even more super). Hand sanitizers are available everywhere, at the room, at the elevators, at the restaurant on every table etc.

Quality of our room was not excellent because of strange shower construction - not very movable shower head built into the wall... Also there was no switch to enable air ventilation in the bath room. Other things was good, even the outer balcony which was perfect to dry the things after water.

Near the hotel there is a taxi stop, get to the center of Marmaris is 25 liras.

I stayed here for a week with my mum and sister and have to say it is one of the best hotels I have stayed in for a long time. The hotel and location were amazing! The staff were brilliant and could not be more than happy to help.

Sacha who runs the animation team was great he kept everybody entertained and really was such a lovely person.

The hotel is also near a water sports hub which is great and the staff there were also fabulous...

We are already planning to go back next year and we cannot wait!

We made friends with dj Onder. He is very communicative and kind guy. He speaks English very well. He always plays good music. If you want you can play water volleyball and darts with him. You always can ask him anything and he helps you with pleasure. I hope that we will come back here this autumn again.

We drew the long straw when decided to fly in to Turkey in the pandemic times of COVID_19 at the beginning of July 2020! With my grown up son, we stayed for a week at the Elegance hotel in Marmaris. We are Ukrainians. So, we adore vacationing in Turkey! Before leaving for a journey, I was advised not to go to Turkey this summer due to the global spread of the virus...

In fact, it turned out to be one of the best times we spent on Turkey’s southern sea shore. Why? The reasons are very simple: 1. Not so many tourists. 2.The staff treat you more as a guest than a tourist. 3.The hotel is half empty. 4. The sea shore is always clean and not crowded. 5. No drunken Russian tourists, no noisy music, no buzz at all! At the first glance, the Elegance hotel does not look for a 5 star one at all. However, the personnel work makes it to be rated 5+! The cuisine is excellent! Evidently, It is typical Turkish, but exquisite due to the two chefs on duty. I do not know their names. However, I have remembered their surnames because in Turkish Karaarslan means the black lions. My personal respect to them for making any meal their hands touched to so tasty. To identify them, one guy is gloomy. The other one is happy go lucky. But they are both like salt and pepper for any good food served. My special thanks to the reception chief leader Seyfi. When arrived, we were provided with a room we could hardly slept in. It overlooked the kitchen huge fan. So, the first night, with our balcony doors full open, we felt like we were sleeping close to an airfield. Well, when requested next morning to make a change, Seyfi did it immediately willingly. A useful advice on my side: if you need any kind of information as for where to go and what interesting to see in Marmaris and around, ask him directly! He is not talkative, but knowledgeable. Our thanks also come to a bar man at the sea pool named Taha. The best Turlkish coffe brewed or the best long drink or cocktail made. He is hard for a smile, but if you are not a drunken type raising complains tourist, a smile and a good joke is applied. Definitely, the hotel is not perfect. It lacks much space on the sea shore line. For this reason, it motivates a sea loving tourist to wake up early in the morning to take a vacant sun bed. I would also not recommend this hotel to the tourists with the small children. Obviously, the Elegance is more designed for the adult tourists. To sum up, the sky is blue, the sea is wet, the sun is shining very bright, the Turkish people are always very hospitable. So, knowing these simple truths why not to spend some memorable time at the Elegance hotel in Marmaris?