Enjoy four days/three nights at leisure on the beaches of Paphos after your Escorted Tour. Stroll along the picturesque Paphos harbour as you bask in the Mediterranean Sun. 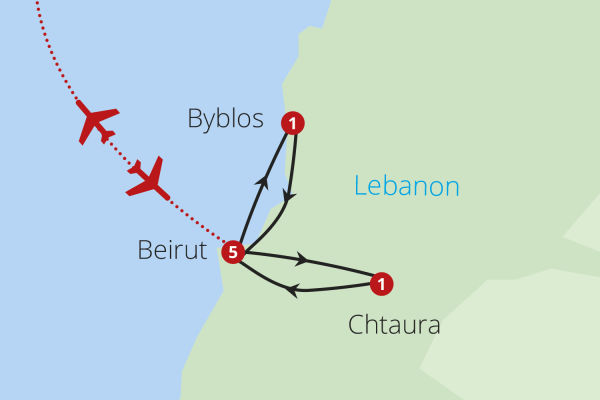 Depart from London on your scheduled flight to Beirut. Upon arrival, your guide will meet and transfer you to your hotel in Beirut for a welcome dinner.

Today depart for Jeita and discover the beautiful natural wonders of the finest caverns in the Middle East. Transfer by cable car to the caverns which consist of two parts - the lower and upper galleries. The lower galleries are visited via boat ride, while the upper caverns are accessible on foot. Whilst visiting the caverns enjoy the refreshing temperature and the sound of rushing water, as well as the stunning columns and sculptures that have been formed by water over time; there's also an effective lighting system allowing visitors a glimpse to the uppermost roofs. Next, head to Faqra, a Roman and Byzantine archaeological site in Kfardebian. Located on the slopes of Mount Sannine and at an altitude of 1,500 metres, it is one of the most important sites of the UNESCO-listed Nahr al-Kalb Valley. From here travel downtown to see an impressive reconstruction project which has unveiled ancient remains from Canaanite, Phoenician, Persian and Roman cultures, revealing that Lebanon's capital city was built on an ancient settlement dating back over 5,000 years. Proceed to Corniche road for a short walk along the favourite promenade of the locals. Further along, the road climbs steeply to a cliff edge, which is the headland of Beirut; there's an array of cliff-top restaurants and cafes to peruse, plus a phenomenal view of the bay and the famous Pigeon's Rock. Departing from the clifftop, the road leads down to a beautiful sandy beach and you find yourself amongst the prestigious residential area of Ramlet El-Baida. End your city tour at the National Museum, an archaeological treasure trove and testament to Lebanon's rich and varied ancient past. After the city tour, you'll continue your journey and visit Beit Mery and the convent of Deir el Qalaa.

Drive along the coastal highway towards Chekka and then ascend east through some of the most beautiful mountain landscapes in Lebanon, continually gaining altitude and witnessing spectacular views of peaks and gorges in Qadisha Valley. When you reach Bcharri, visit the museum of the international writer and poet, Gobran Khalil Gobran, before heading to Qadisha Valley which is filled with caves and rock shelters inhabited from around 3,000 B.C. to the Roman period. Witness cave chapels and monasteries cut from rock, before continuing to Byblos. This charming town has plenty of personality with numerous historic sites, a fisherman's harbour, the Church of St. John the Baptist and souks.

Begin today's tour of Byblos by exploring the souks and later take a visit to the east of the Crusader Castle - from a Roman pathway you'll see emerging columns dating to the 3rd Millennium B.C. that bring into view a large skylight between two ancient stone walls. The sign of fire on it is a remain of the Amorite invasion that took place in 1500 - 2500 B.C. Travel along the coastal road to Jounieh and take the Telepherique up the outstretched arms of the Virgin of Lebanon in Harissa - a breath-taking view of the bay, before continuing to your hotel in Chtaura for dinner.

Return to Beirut for three nights. Depart on a journey across the Mount Lebanon range and drive through Beqaa plain towards Baalbeck, a significant pilgrimage site, considered one of the Wonders of the Ancient World. Visit Lebanon's greatest Roman treasures and architectural mysteries, where a collection of impeccably preserved temples stand majestically in this former ancient civilisation. Marvel at the spellbinding magnitude of the Temple of Jupiter, whose 54 surrounding columns, towering 23 metres overhead, are believed to be some of the largest in the world and have perplexed generations of archaeologists, who continue to speculate as to how these structures could have been so delicately carved in the 2nd century CE. Wander through this UNESCO World Heritage Site's assortment of various ancient ruins, encompassing visits to Venus, the Great Court and the Hexagonal Forecourt, and from here, drive to Ksara Caves to sample some local wines. Finally, stop off in Anjar to visit the fortified city ruins of Umayyad, used in ancient times as a centralised commercial site, serving as a crossroad of two established trading routes.

Travel to Beiteddine via the charming town of Deir el-Qamar; this old town has maintained its architectural properties of the 17th and 18th Centuries. From here, continue to the imposing palace of Beiteddine which is the best example of early 19th Century Lebanese architecture, built over a 30-year period by Emir Bashir. Enjoy the palace complex and its museums as well as it's fine collection of well-preserved Byzantine mosaics.

Depart for UNESCO listed Tyre with excavated ruins that consist of three parts: the south side of the old Phoenician island-city, the northern site ruins, and the third area on the landward side on the east, that consists of the most impressive archaeological remains such the Roman necropolis and hippodrome. From here, drive back along the costal road to another important Phoenician town, Sidon, with its Sea Castle and old covered souks. On the city's northern gate, the Phoenician Temple complex of Echmoun will be visited before returning to Beirut for your final evening meal.

Day 8
Beirut to the UK

Transfer to Beirut International Airport for departure back to the UK.

Enjoy your stay at leisure as you soak up in the Mediterranean Sun.

After breakfast, transfer to the airport for your flight back to the U.K.

The hotels listed below are provided for guidance only and final confirmation of your accommodation will be sent to you approximately 90 days before you travel
Crown Resorts Horizon Hotel
3 nights
Coral Bay, Cyprus
More details
Gems Beirut
5 nights
Beirut, Lebanon
More details
View More

A visa is required for your trip to Lebanon and will be issued upon your arrival at Beirut International Airport. Further advice should be sought from the applicable tourist authority for other nationalities and for general queries. We strongly advise you check your destinations' Tourist Board or Embassy for the most up-to-date guidelines regarding passport validity.

Your initial flight is to Beirut Airport with British Airways, departing from London Heathrow Terminal 5. Each passenger is entitled to 23KG of hold luggage plus 1 item of hand luggage not exceeding (Max 23kg - 56cm/45cm/25cm) in size and 1 personal item such as a handbag, briefcase or laptop case. Weight restrictions will be finalized on your final documentation. Should you wish to take additional luggage you will need to pay extra at check in. Check-In should be at least 3 hours before departure. IMPORTANT: Please note that final flight details will be confirmed on your final documentation which will be sent to you approximately 10 days before departure. A printed E-ticket is no longer required at check-in, all you need to do is present your passport to the staff at the desk and your boarding pass will be given to you.

This is a fully escorted tour, meaning that you will be met on arrival by your national guide who will remain with you for the duration of your trip. You will also be joined by a local guide in each of the cities which you visit, ensuring that you always have first-hand knowledge.

The currency in Lebanon is the Lebanese Pound. We recommend that you exchange your currency before you leave the UK. It is important that you budget carefully and ensure you have the right form of currency before you arrive in the country. Cash machines will also be available throughout the tour in order to withdraw money in your local currency.

You will need to take money with you to cover any personal purchases such as souvenirs, laundry, any meals not included in the itinerary as well as drinks and any additional snacks. Approximately £150- £200 per person will be sufficient for the duration of the tour. It is a good idea to try and maintain a supply of small notes and change in the local currency for tipping or small purchases.

It is at your discretion to tip both your driver and guide. We would recommend to tip approximately $3 per guide per day and $2 per driver per day. This is a total of $40 per person to budget for tips on your trip. As tipping is at you discretion, please tip as and when you feel appropriate too. Tips are accepted in the local currency.