Discover the astonishing natural and cultural variety of Malaysia. Home to Malay, Chinese, Indians and still with the remnants of British colonialism, the country is a dazzling mosaic of cultural and culinary diversity which is only matched by its natural beauty. 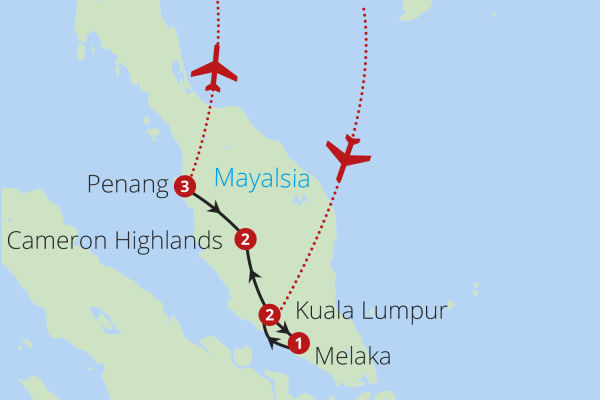 Depart from London on your scheduled overnight flight to Kuala Lumpur.

Upon arrival, you'll be met by your guide and then transferred to your hotel in Melaka. Enjoy a leisurely afternoon at your own pace after check-in.

After breakfast, check-out from your hotel in Melaka and begin a fascinating tour of Malaysia's oldest town. Founded in 1403, UNESCO-listed Melaka is full of fascinating history and multi-cultural heritage; The Portuguese, Dutch and British ruled over Melaka's silk and spice trade for centuries and these invaders have left an unparalleled legacy of historical relics and monuments, reflected strongly in this town. Walking through the city's historic buildings, catch a glimpse of Stadthuy's distinctive pink facade, believed to be the oldest Dutch building in the east, before witnessing the ruins of St Paul's Church and the ancient remains of a former Portuguese fortress, whose small gate house, known as the Porta de Santiago, is the citadel's sole remnant. Next, enjoy some time to stroll along the clothing and crafts outlets in Jonker Street, historically renowned for its selection of antique articles. After a day of exploration, head to your hotel in Kuala Lumpur.

After breakfast, head out to discover the old and the new on a half-day tour that introduces you to this bustling city's character and charm. See some of Kuala Lumpur's most iconic landmarks, including the distinct golden domes of the King's Palace, National Monument's poignant bronze cenotaph, serving as a touching tribute to Malaysia's fallen soldiers, and journey to the colonial heart of the city at Independence Square. Following a visit to the iconic Petronas Twin Towers, soaring 452 metres into the sky, sit back and enjoy a panoramic drive along the stylish streets that reveal the contrasting sights of modern skyscrapers and colonial architecture. Later, check out what's so special about this 'Garden City of Lights' and visit the vibrant streets of Chinatown, known to be the best place to grab a bargain. To experience a different culture, visit the city's oldest Hindu Temple, adorned with intricate roof carvings, depicting the many Gods of the Hindu religion.

Considered one of the longest caves in the Malaysian Peninsula, spanning over 3km, journey to the impressive Gua Tempurung Cave network, atmospherically lit up for easy exploration. Concealing a kingdom of mystical underground stalagmites, observe a wonderland of fortuitously formed caves before continuing to the Cameron Highlands. Sitting 6,000 ft above sea level, undulating valleys and majestic mountains surround an area decorated with tea plantations, flower gardens, vegetable farms and fruit orchards.

Head out on a full day tour of the Cameron Highlands. You'll begin the tour by embarking on a Mossy Forest Walk through blankets of verdant tea plantations towards the summit of Gunung Brinchang; located 6,666 feet above sea level and boasting incredible vistas of the towns and valleys below, marvel at breath-taking landscapes before sampling the delicious tastes of local tea at the BOH Tea Plantation, where an astonishing 70% of all Malaysian tea is manufactured. Gain an insight into the process of producing tea leaves and learn about the history of this agricultural haven on a fascinating factory tour. Continue to a hillside market where a diverse assortment of fruit, vegetables and flowers are on offer, and later, enjoy Butterfly Farm where you'll discover over 50 species of butterflies and other various insects which reside here.

After breakfast journey to Penang, where, on the way you'll stop for a visit to Bukit Merah, a sanctuary for Orangutans. Take a trip to 'Orang Utan Island' for a unique encounter with this enchanting and threatened species, and delight in the opportunity to learn about the sanctuary's various nurturing and research programmes, getting to know these charming creatures a little better. Continue to Penang, also known as the 'Pearl of the Orient'. Here you can experience the diversity of Asian culture in the smallest of spaces. The capital, Georgetown, is a beautiful and historical district that has been home to Chinese, Indian and British cultures.

Check-out and begin your tour to Kek Lok Si Temple this morning. Also known as the Temple of Supreme Bliss, it is the largest Buddhist temple in Southeast Asia and one of the most iconic landmarks in Penang. The centrepiece of the temple is the 7-tiered Pagoda of 10,000 Buddhas and adjacent to this imposing edifice is the bronze Statue of Guanyin (Goddess of Mercy) - believed to be the tallest in the world. For a panoramic view of Georgetown and the Straits of Malacca, hop on the funicular train and ride up to the top of Penang Hill. Rising a spectacular 830 metres above sea level, this hill was once a cool retreat during the colonial days.

Explore this historic and charming town at your own leisure. Seek out the unique street art, sample Asia's finest street food, shop at the huge range of markets, or simply hop in a taxi and head over to Penang's beaches a short ride away.

After breakfast travel to Penang Airport for your return flight to London.

A visa is not required for your trip to Malaysia. However, your passport should have at least 6 months' validity from the date of entry. Further advice should be sought from the applicable tourist authority for other nationalities and for general queries. We strongly advise you check your destinations' Tourist Board or Embassy for the most up-to-date guidelines regarding passport validity.

This tour is accessible to people with an average level of fitness and normal mobility. It involves moderate days of walking and getting on and off coaches and boats. This tour is not suitable for anyone with walking difficulties.

The currency in Malaysia & Borneo is the Malaysian ringgit, we recommend that you exchange your currency before you leave the UK. Cash machines are available in all the major cities to withdraw money in the local currency.