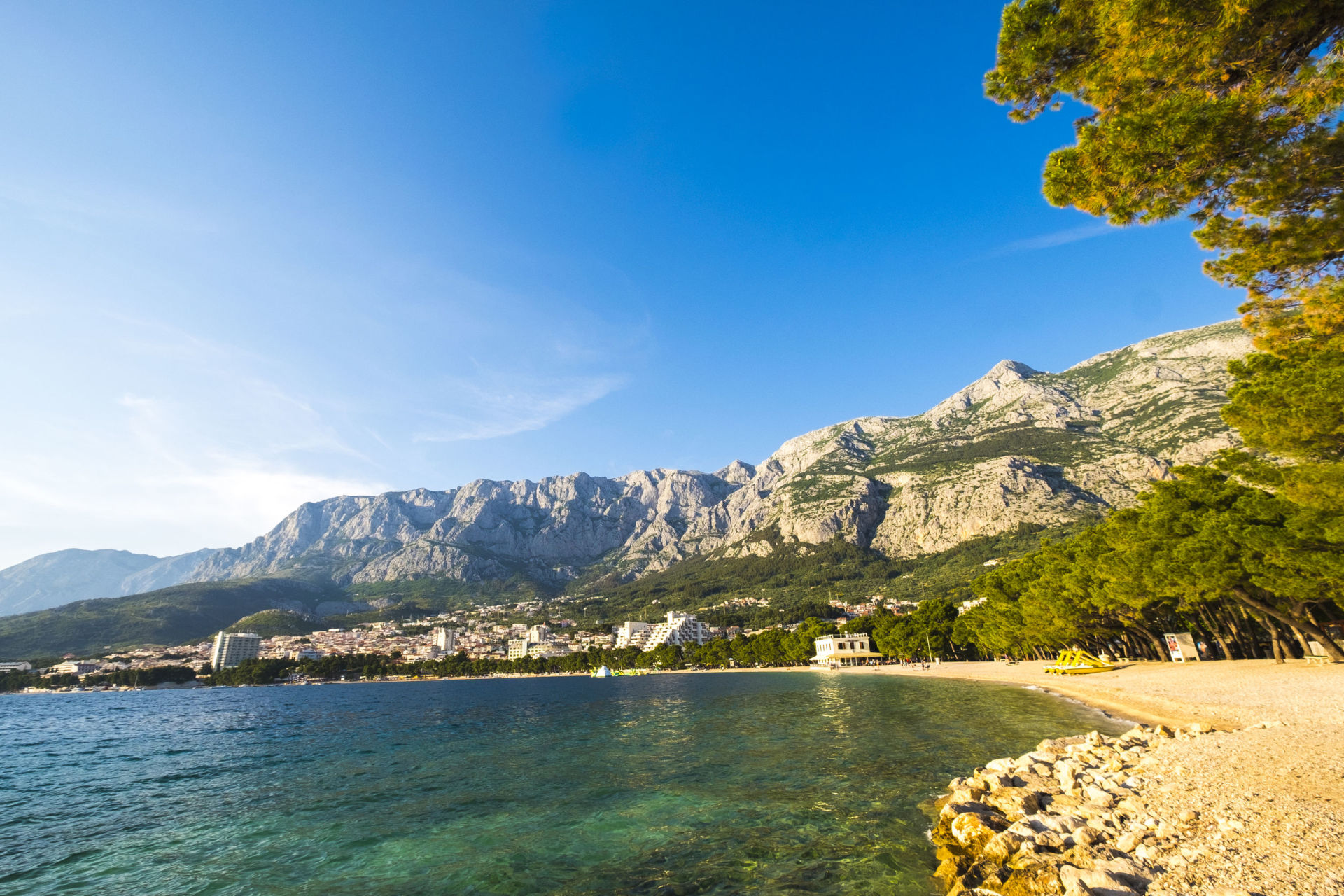 End your island adventure with a 4 night, 5 day beach extension to Tucepi. A small town located on the Adriatic coast known as the Makarska Riviera.

Day 1
UK to Montenegro via Dubrovnik

Depart London on a scheduled flight to Dubrovnik. Be met on arrival and transfer to the beautiful resort of Budva in Montenegro, your hotel base for two nights.

This morning set off on a short trip to Kotor, stopping en route at the beautiful little town of Perast, described as "a piece of Venice that has floated down the Adriatic". See its most famous landmark, a man-made islet with a chapel known as 'Our Lady of the Rocks', built by sailors who believed they had encountered a miracle at this spot. Continue on to a tour of Kotor Old Town, an atmospheric delight set between the bay and the mountains. This UNESCO World Heritage Site is characterised by soaring defensive walls, ancient cafe-filled squares, palaces, churches and museums. Most impressive of all is the Cathedral of St. Tryphon, originating from the 12th century and evolving over time after numerous earthquakes. Marvel at the magnificent Renaissance and Romanesque architecture, with vaulted roofs supported by columns and pillars of pink stone. Don't miss its most valuable treasure, the gilded bas-relief altar screen. Built in honour of the city's patron Saint Tryphon, this is one of only two Roman Catholic Cathedrals in Montenegro.

After breakfast transfer back to Dubrovnik, Croatia's picture-perfect medieval city which has featured as a backdrop to many a Hollywood production. Today's guided walk around the walled old town is a cultural and visual feast and takes in the many highlights of the city. Stroll along Stradun, the limestone-paved main pedestrian thoroughfare, which buzzes with bars, cafes and street performers before visiting the 14th century Franciscan Monastery at Stradun's west end, which has a beautiful garden and Europe's oldest working pharmacy. Afterward, proceed to nearby Onofrio's Fountain, built in 1438 to bring water into town via an aqueduct seven miles away. Observe Orlando's Column, carved in the form of the ancient Knight Orlando, and admire the stunning Baroque Church of St Blaise, patron saint of Dubrovnik who saved the city from attack by Venetians. This afternoon enjoy time to explore this awe-inspiring city at your leisure before checking into the hotel for the first of two nights.

Today is yours to discover more of Dubrovnik's attractions at your own pace. You might choose to walk the iconic 2km circuit atop the city wall, which offers ever changing vistas across the terracotta rooftops of the city and the shimmering Adriatic. A different and more leisurely way of getting equally spectacular views is to take a ride in the cable car, opened in 2010. Alternatively, wander through the Old Town and enjoy its many attractions - historic churches and buildings, medieval sculptures, modern galleries, designer shops, cosy cafes, bars, and restaurants - it's all here. On the other hand, there are numerous beaches offering a more laid-back option and a chance to relax.

Today, depart Dubrovnik after breakfast and travel towards Mostar in Bosnia and Herzegovina. Acting as the country's central economic and cultural capital, Mostar is an enchanting and fairy-tale like city which boasts a number of picturesque restaurants and markets. View the country's most recognisable landmark, the Stari Most (Old Bridge), an amazing example of Islamic architecture. The restored bridge again connects numerous sights and attractions on both sides of the city, including the mosque, an old style Turkish house and the old bazaar. Ramble over the cobbled streets of the bazaar and immerse yourself in Mostar's local craft shops and traditional restaurants. Journey onwards to Split, Croatia's 2nd largest city and transfer to tonight's hotel.

After breakfast, explore the vibrant Croatian city of Split. Occupying a dramatic coastal position, Split is a city in which the architecture and surroundings fluctuate between traditional and modern. Tour the grand Diocletian Palace, built as a luxury villa, summer house and military camp for Roman emperor Diocletian in the fourth century and wonder at the palace's majestic Peristyle and golden gate. Afterward wander down the waterside promenade lined with lively restaurants, shops, and cafes, which contrast with Split's medieval centre.

Depart Split after breakfast at the hotel and travel to Krka National Park and the Skradinski Buk Waterfalls. Located near Sibenik, these 17 stunning falls along the Krka river are one of the best-known natural beauties of Croatia. Get the best seat in the house by embarking on a boat ride across the river, unquestionably the ultimate way to soak in the sights and sounds of the park. Afterwards you can experience the refreshing river waters by taking a quick dip. Depart Krka National Park and stop off en route to relax in the historical town of Sibenik, idyllically located on the banks of the river Krka. Overlook the calming blue waters before returning to Split for a dinner at your hotel.

This morning, leave the hotel and transfer to Split Airport for your return flight to the UK or onto your chosen extension.

After breakfast transfer to the Bluesun Hotel Alga on the Makarska Riviera.

Relax at your beach hotel enjoying the local attractions and the facilities of the hotel.

Enjoy a day of leisure at your hotel.

Enjoy a day of leisure at your hotel.

Transfer to the airport for flight back to the UK.

The hotels listed below are provided for guidance only and final confirmation of your accommodation will be sent to you approximately 90 days before you travel
Bluesun Hotel Alga
4 nights
Tucepi, Croatia
More details

Our guide Mislav was second to none, brilliant personality within depth knowledge of all places we visited and beyond. He did everything in his power to ensure all went smoothly arranged the best time to leave the hotels to arrive at each destination in good time before other tourists. He also booked the best city guides and advised places to eat. He answered all questions and queries put to him by the group. Last but not least he made our holiday fun. Super hotels even though the last one was changed due to a burst pipe. A superb holiday in a beautiful country with friendly people.

A visa is not required for your trip to Croatia. Further advice should be sought from the applicable tourist authority for other nationalities and for general queries. We strongly advise you check your destinations' Tourist Board or Embassy for the most up-to-date guidelines regarding passport validity.

You will fly directly from London Gatwick to Dubrovnik and return to London Gatwick from Split with EasyJet. You will depart from London Gatwick North Terminal. For flight timings for each departure, please see grid below. Each passenger is entitled to 23KG of hold luggage plus 1 item of hand luggage not exceeding (Max 7kg - 56cm/45cm/25cm) in size and 1 personal item such as a handbag, briefcase or laptop case. Weight restrictions will be finalized on E-ticket receipt. Should you wish to take additional luggage you will need to pay extra at check-in. Check-in should be at least 3 hours before departure.

If you wish to arrange Airport car parking or accommodation at preferential rates, we recommend you book this in advance with Holiday Extras on 0871 360 2000, quoting HX313. IMPORTANT: Please note that final flight details will be confirmed on your e-ticket and final documentation which will be sent to you approximately 10 days before departure.

This tour is accessible to most people with a good level of fitness and normal mobility. It involves climbing of steep stairs and getting on and off coaches. This tour is not suitable for anyone with walking difficulties.

Please note that the tour director will not be present during the beach stay portion of your tour.

The currency in Croatia is the Croatian Kuna, The currency in Bosnia and Herzegovina is the Bosnia - Herzegovina Convertible Mark. The currency in Montenegro is the Euro. We recommend that you exchange your currency before you leave the UK, however cash machines are available in all the major cities to withdraw money in the local currency.

You will need to take money with you to cover any personal purchases such as souvenirs, laundry, any meals not included in the itinerary as well as drinks and any additional snacks; Approximately £300- £400 per person will be sufficient for the duration of the tour. It is a good idea to try and maintain a supply of small notes and change in the local currency for tipping or small purchases. It is customary to tip both your driver and guide approximately 2 Euros per person per day in total. Tips will be collected at the end of your tour. Please note if you are taking the Croatian island cruise extension- an Embarkation Tax is to be paid to the shipowner on arrival to the vessel. The tax is 21 euros per person and must be paid in cash only.