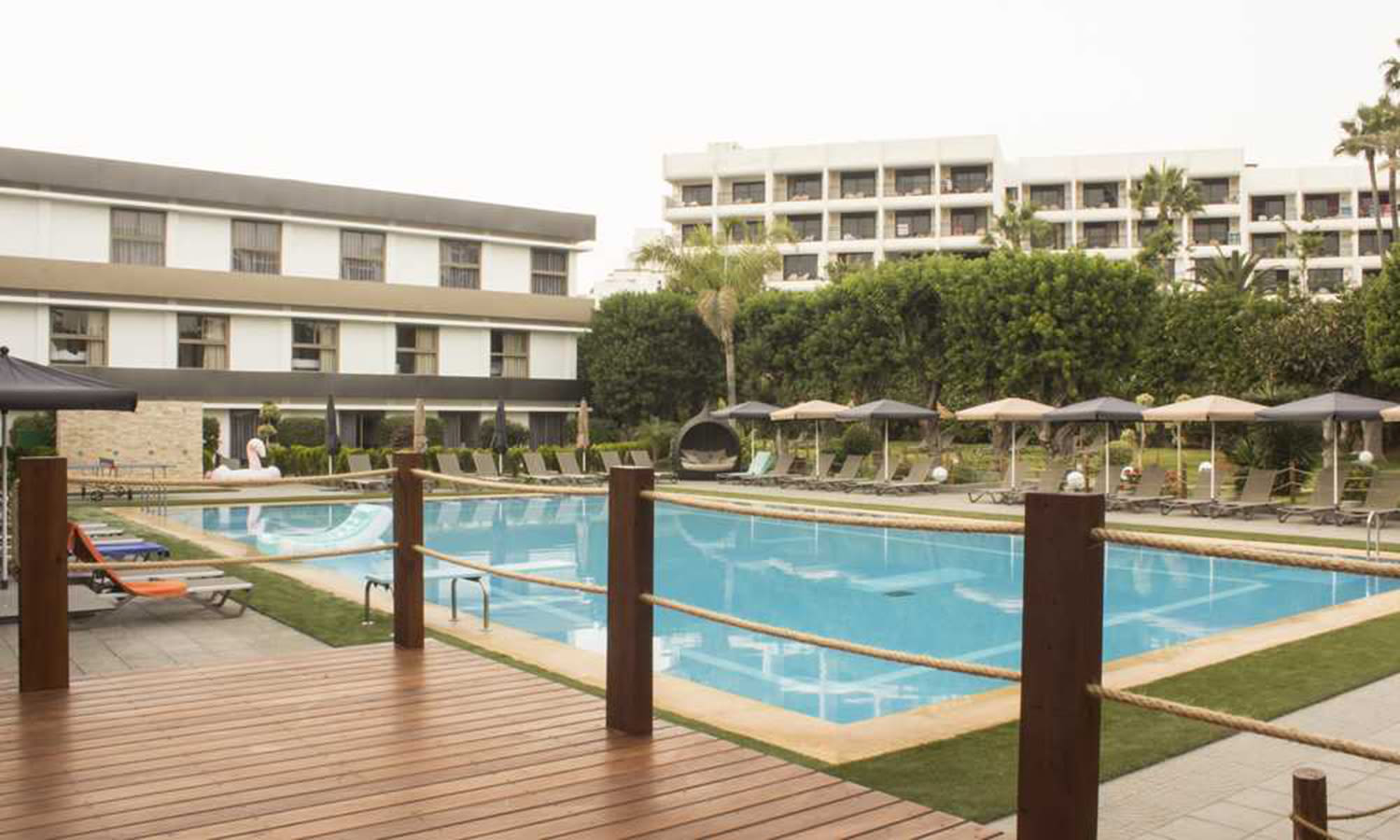 This 4-star boutique hotel is located just a 15-minute walk to the hustle and bustle of the city centre and 5-minutes from the popular 'Agadir Beach'. The hotel is carefully designed with special attention to detail around the hotel and in the rooms, to ensure a good combination of modernity and tradition.

Around the resort, charming terraces beside bars are available where you can sit back and relax with a drink- snacks are also served here. The themed bars 'Le Blue' and 'Le Red' is lit up by calming lights of an evening and perfect to wind down after a long day of haggling at the popular souks- a traditional Morroccon Market. The hotel features a large swimming pool surrounded by sunbeds, and inflatable lilo's. Mabrouk Hotel provides its guests with a private beach area for those lazy days in the sun and sea.

The hotel is perfect for those who love either a city or beach break, as it is in a perfect location for a mix of both!

Your Accommodation at Mabrouk Hotel and Suites:

Guestrooms are all individually air-conditioned and feature standard facilities including; minibar, safe, hairdryer, Wi-Fi and some feature panoramic views of the sea. Upgrades to suites are available at a supplement. Suites come with a living area as well as a sleeping area.

This 4-star boutique hotel is located just a 15-minute walk to the hustle and bustle of the city centre and 5-minutes from the popular 'Agadir Beach'. The hotel is carefully designed with special attention to detail around the hotel and in the rooms, to ensure a good combination of modernity and tradition.

The Wi-Fi wasn’t working in the room but in the rest of the Hotel. We choose and paid this hotel to sleep but we couldn’t sleep because it was too noisy. There were annoying disco music all night and also near the swimming pool so we couldn’t use it...

The first night at 3am the music wasn’t stopping so we ask to be moved in another room and they said that they would moved us in the suite the next day. The next day they end up saying that we had to pay more for the suite. So we couldn’t sleep for two night. GOOD POINTS: the room was clean, very good breakfast, kind staff, amazing shower.

WORST HOTEL NOT EVEN A ONE START.

Please forward my complaint letter to the hotel General Manager:

I would like to file my complaints about the service of your hotel and crappy rules.

After long trip i was exhausted and i need some rest but due the loud music on the wohle hotel i couldn’t have enough sleep. Second they don’t allow dressing gown at the breakfast time which i find it offencive and unacceptable & insulting.

Breakfast was poor and not a buffet so there no more options and if u need for exemple more juice you have to pay extra.

They keep saying that there is no manager or someone higher than them available in the hotel.

Definitely i will never come back to this hotel.

Review by gertjanvdb Groningen, The Netherlands

We stayed a few days at Mabrouk, just to relax. The hotel is recently renovated and everything looks very beautiful and new, better than the pictures indicate.

The pool is great and towels are always provided by the staff...

At night the pool area changes into a beautiful and huge shisha lounge where many ‘exclusive locals’ meet each other. Looks, music and atmosphere is great and also welcoming to the hotel guests. Alcohol prices are comparable to all the restaurants in Agadir. We did not hear any noise from this club in our room, but our room was not located at the pool side so maybe over that could be a problem.

The hotel is located between Agadir center and the beach. Restaurants 2min walk, beach 7min walk. The staff of the hotel helped us generous with all our questions and requests, especially Youssef Lafdi was a great host during our trip.

All in all, highly recommended place to stay in Agadir. We will definitely come back!

Great only if you are a Party Animal !

Lovely modern hotel in good location not far from beach. Stylish interior. Pool and terrace looks very smart but not particularly sunny- whole place seems to be set up as a night club with rooms- pool area turns into party zone before dusk and goes on until 3/4/5 am...

Great if you are a party animal- terrible if you want some sleep !!! I would not return.

Ok but would not stay here again

We stayed at the Mabrouk for our anniversary in June 2019 on our first visit to Agadir, and although it wasn't horrendous, I would not stay here again.

The hotel communal areas were clean and modern looking with the security staff at the gate and a nice outside pool area (which becomes a nightclub from about 4pm, so a bit off putting when sunbathing in the later afternoon). It is also in a good location, within a 10 minute walk from the beach and close to shops and resturants, these are the good points...

Our room was small, with no balcony and seemed a bit shabby and cheap. The cupboard under the sink was broken off the hinges, the shower leaked and was more often than not cold and the duvet was stained. The safe was stuck at locked when we arrived (was this not checked when the room was cleaned between guests?) and after 2 trips down to reception they had to call an outside technician to fix it meaning we had to carry our passports and all our money around for the first day. We also asked at reception if we could get some laundry done, and were told just to leave the clothes we wanted washed in the middle of the bed which we did for two days running, but they were not washed, so not sure why we were told that - very random, and ended up washing some bits in the sink as it was getting too close to the end of our holiday to make a fuss.

The breakfast is cooked to order but not many options so gets a bit repetitive after a few days, and the breakfast staff are very slow - we waited nearly an hour on our first day for our breakfast and drinks and considering there were only about 4 other tables of people they weren't exactly busy, we still had to then request cutlery (received another 10 minutes later with an eye roll). The man on the table next to us had to ask 4 times over the course of about 45 minutes for his coffee.

As mentioned above, the pool area is also a nightclub with loud music playing through the night. Luckily I'm quite a heavy sleeper, but I did wake up one morning and noted there was loud bass still playing at 4.30am. The drinks especially there are very expensive - we were told to ignore the drink prices on the food and drink menu and were given a separate 'summer' drink menu sheet where basically all the prices were increased by 25%. I know it is their perogative to set their drink prices seasonally, but don't show us the cheaper winter prices too as it just adds to the feeling of being ripped off!

All in all it wasn't terrible, but we would not stay here again and am sure we could get something much better for the same money elsewhere in Agadir.