The Li River and its surrounding countryside is what you might call ‘chocolate-box’ China. The serene waterway and its tributaries flowing lazily through verdant countryside, flanked by a procession of jutting karst peaks with bizarre names and associated legends. Water buffalo graze and wallow while farmers work their fields in conical hats and villagers pole along the river on bamboo rafts. It’s no wonder that the area has inspired generations of poets and painters, as you will discover on your 5-hour cruise along the river’s 52 mile stretch between Guilin and Yangshuo. 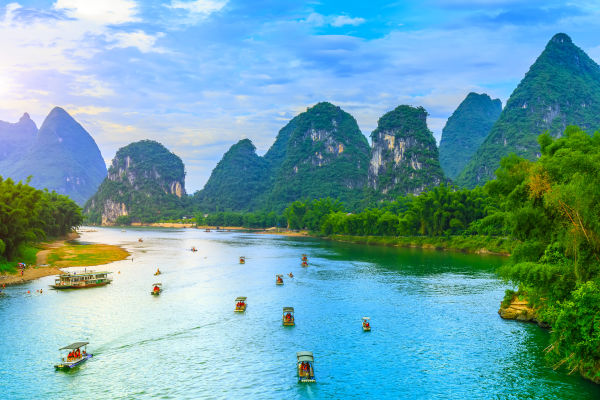 The trip is timed to arrive in Yangshuo early afternoon after lunch on your boat, allowing time for some sightseeing and shopping in the colourful, bustling marketplace. Along the way you’ll see the spellbinding scenery as the river snakes gracefully past spectacular mountains, gigantic bamboo sprays and picturesque villages. You’ll see peaks with weird and wonderful names, such as Woman Yearning for her Husband’s Return and The Eight Immortals. Visual highlights are clustered between Yangdi and the photogenic town of Xingping. A steep cliff known as Jiuma Hua Shan (Nine Horses Fresco Hill) bears shadings and markings said to resemble a fresco of nine horses. A little farther on, Huangbu Daoying, a series of karst peaks and their reflections, is the tableau depicted on the back of a Chinese ¥20 note.

You’ll disembark at Yangshuo, once a sleepy haven to a few Western travellers that has grown with tourism and now offers a rich variety of bars, restaurants, shopping and night life. A stroll down the town’s famous West Street is on most visitors’ agenda, while bargain-hunters can pick up excellent pieces in pearl and jade, or fine Chinese paintings.

These days, no visit to Yangshuo is complete without experiencing an awe-inspiring performance of the Impression Liu Sanjie show on a stage set right on the Li River itself. This is an after-dark, open-air song, dance and light spectacular put together by world-renowned film director Zhang Yimou, who created the opening and closing ceremonies for the 2008 Beijing Olympics. The 1-hour show features a cast of more than 600 local farmers, fishermen and residents who give a mesmerising interpretation of the legend of the ‘Song Fairy’ Liu Sanjie.

Elephant Trunk Hill stands right next to the down area of Guilin City, at the confluence of the Li River and the Peach Blossom River. Legend tells of an elephant that deserted the emperor’s ranks to help Guilin people plough their fields during a time of famine. The elephant used to drink at this spot on the Li River, and the large rock known as Elephant Trunk Hill commemorates its heroic deeds. 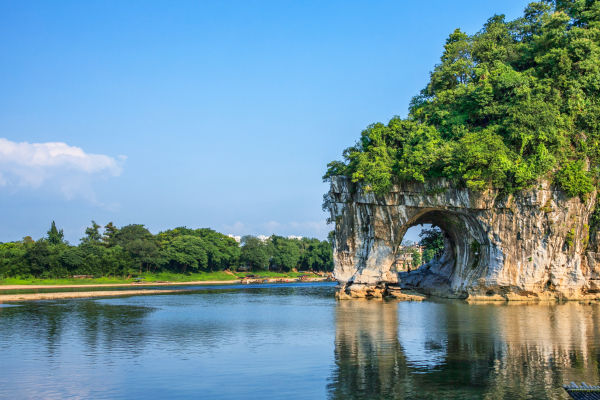 On the river, you may catch a glimpse of Cormorant Fishermen – a truly amazing skill passed down through generations. Fishermen on bamboo rafts use cormorants to catch the fish and bring them to their boats. The cormorant cannot swallow the fish because the fisherman ties a cord loosely around the bird’s neck. The fishermen claim that every seventh fish belongs to the bird. A good diving-fishing cormorant can feed a whole family!