In terms of unmissable Beijing sights, the Summer Palace is right up there with the Forbidden City and the Great Wall. It can shock the senses of even the most saturated tourist. This huge expanse of Qing-style pavilions, bridges, walkways and gardens, scattered along and around the man-made Kunming Lake, was built in the mid-18th century as a summer playground for emperors and empresses. Emperor Qianlong amassed and marshalled a 100,000-strong force of labourers to create the lake in the south of the 700-acre park, and Longevity Hill (Wanshou Shan) in the north. It is said that he watched imperial navy drills on the lake from his perch on the hill. 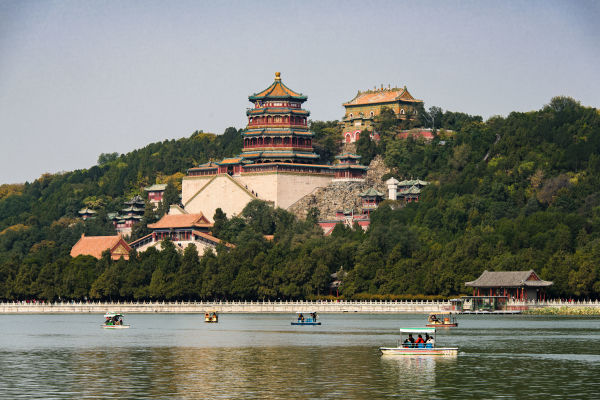 Between 1860 and 1903 the palace was twice wrecked (and rebuilt) – first by Anglo-French troops during the second Opium War, and later by foreign troops angered by the Boxer Rebellion. Possibly its most famous (or infamous) incumbent was the Empress Dowager Cixi, who in 1888 commissioned a major refurbishment of the palace using money intended for modernising the Chinese navy. In a somewhat cynical gesture, she included the creation of a folly in the shape of the Marble Boat (Shi Fang), a strange structure docked at the end of the Long Corridor. As one novelist has wrily observed, it is “neither marble nor a boat”. What it is for many Chinese people is a symbol of China’s decline during the Qing dynasty, because shortly after the restoration (and marble boat) was completed, China’s feeble fleet was destroyed in a skirmish with Japan.

A truly stunning work of art

The aforementioned Long Corridor (Chang Lang) is a covered wooden promenade stretching nearly half a mile along the northern shore of Kunming Lake. Every cross beam, ceiling and pillar is painted with a different scene from Chinese history, literature and myth – some 14,000 paintings in total!

Longevity Hill is adorned with numerous Buddhist temples as well as Baoyun Ge (Precious Clouds Pavilion), one of the few structures in the palace that avoided destruction by foreign forces. There are dozens of pavilions and bridges on all sides of the lake, enough for a full day of exploration. Don’t miss the Seventeen-Arch Bridge (Shiqi Kong Qiao), a marble bridge with a span of nearly 500 ft connecting South Lake Island (Nan Hu Dao) to the east shore of Kunming Lake. On the east side is a remarkable life-size bronze Ox, crouching on its stone platform apparently to help in the prevention of floods.

The Summer Palace is quite an extraordinary place to explore, with an almost Disneyland kind of feel to it. The grounds were declared a public park in 1924, and in 1949 the palace was once again given a major overhaul after falling into disrepair.