The ‘Terracotta Army’, only discovered in 1974 and considered to be the Eighth Wonder of the World, is an entire army of life-size terracotta soldiers and horses which had lain buried and hidden for over 2,000 years. The site ranks with the Great Wall and Beijing’s Forbidden City as one of China’s premier tourist attractions.

About the Terracotta Army

In March 1974, a group of peasants in the drought-parched Shaanxi Province were looking for a new place to sink a well. They had been digging for some hours when one of them unearthed fragments of a clay figure – the first evidence of what would turn out to be one of the most important and complex archaeological excavations of all time. The site is close to the unexcavated tomb of Qin Shi Huangdi, who had proclaimed himself first emperor of China in 221 BC. They had stumbled upon an army of thousands of life-size models constructed to protect the tomb as the emperor’s guard in his afterlife. 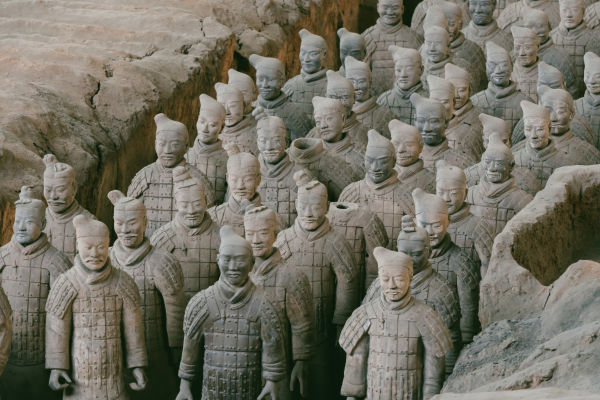 As work progressed, four main Terracotta Army pits came to light - three with figures in them and one empty, suggesting the project was not completed before the emperor’s death. It is estimated the pits contain up to 8,000 figures, though the exact total may never be known. The complete army took forty years to build, using essentially a prototype manufacturing company with managers, supervisors and workmen organised into factory complexes. Each warrior was built by hand using ancient moulding techniques.

The four-acre Museum of the Terracotta Army, constructed around three major pits (known as Vaults) of the discovery site, opened in 1979. The largest and most visited:

Vault One – the size of an aircraft hangar – is believed to contain over 6,000 figures of soldiers and horses, with about 2,000 on display. They fall into three major categories: infantry, cavalry and charioteers, with each category further divided into different ranks and roles, from officers to foot soldiers to kneeling archers.

Most striking of all is the astonishing individuality of these figures. Every figure seems to differ in facial features and expression, clothing, hairstyle and gesture. In fact all of these aspects are deliberate symbols of rank and social status. Topknots or caps; tunics or armoured vests; goatees or close-cropped beards… subtle variations carry great significance.

Vault Two has only been partially excavated to show the visitor what it was like at the time of discovery. It contains a large squadron of war chariots and armoured cavalrymen standing in front of their horses, and a group of archers and infantrymen.

The Exhibition of Bronze Chariots

The two bronze chariots displayed in the hall were discovered 20 metres from the west side of the tomb in 1980 and were carefully restored. They each have around 3,400 working parts and were driven by four horses. The carriages and horses are mainly made of bronze and adorned with golden and silver ornaments. These chariots are the biggest pieces if ancient bronzeware ever found in the world.