For most of us, the word 'Hiroshima' doesn't really mean a place. It is a word for an event, a catastrophic landmark in human history. It conjures black & white images of a desolate, flattened wasteland pockmarked by a few charred skeletons of buildings, like cacti in an arid desert. It is a byword for death and destruction on a scale never wrought or witnessed by mankind before or since 8:15am on August 6th, 1945.

Some may say it's 'Dark Tourism'

From that moment in time, forever frozen on the clock at the Peace Memorial Hall, Hiroshima has evolved from a scene of tragedy into a symbol of hope – a focal point for peace activism and nuclear abandonment. Today, Hiroshima looks pretty much like any other up-and-coming city in Japan. It’s friendly, it’s modern, it makes cars and ships, it has great food and nightlife. On the other hand, it has none of the old buildings, temples and historic structures that bring tourists to other places. But it has a split second of history that draws millions of visitors a year. And the plain truth is that the vast majority come to bear witness to the actual scene of the crime and try to comprehend the cataclysm. To understand the determination to eradicate nuclear weapons from the face of the earth, you have to come here. Some people call this “dark tourism”. We prefer to see it as an enlightening experience, if a sobering one.

There were around 350,000 people living in Hiroshima at the time. The explosion killed around a quarter of the population instantly and obliterated nearly everything within six square miles. Radiation poisoning soon sickened others, resulting in a final death toll somewhere in the region of 140,000, possibly more. The heat from the blast was so intense that it seared people’s skin and the pressure tore off their clothes and exploded their internal organs. It is almost impossible to imagine, but the Peace Memorial Park & Museum, in the centre of the city, gives you both a vision of hell and a message of hope. 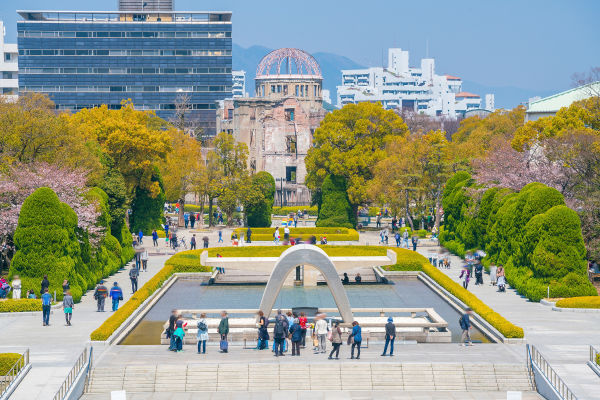 On one hand, there are the individual stories and evocative exhibits, including a blistered and fused tricycle that a four-year-old boy was riding during the blast that burned him alive. Photos, documentary films, nightmarish drawings by survivors, scientific explanations of the explosion, plus other artifacts including melted glass and charred clothing, hint at the unimaginable. On the other hand, there are positive signals about the human spirit such as the Memorial Cenotaph which bears the epitaph: “Let all the souls here rest in peace, for we shall not repeat the evil”. There is the Peace Flame, which will continue to burn until all atomic weapons vanish from the face of the earth and mankind is no longer threatened by nuclear war. In the words of Museum Director Kenji Shiga, “This museum was established in the city of Hiroshima to convey the reality of the atomic bombing to the world, and contribute to the total abolition of nuclear weapons and realisation of lasting world peace”.

On a brighter note…

The necessary jolt that this experience delivers is undoubtedly the main reason to come to Hiroshima. But it is by no means the only one. It’s a vibrant, welcoming and entertaining city on lots of levels that knows how to have a good time. And you really wouldn’t want to leave without making the short ferry trip over to the gorgeous Miyajima Island, just over a mile off the mainland in the Seto Inland Sea. Ranked as one of the three most scenic spots in Japan, this exceptionally beautiful island is home to free-roaming tame deer, tree-swinging monkeys and delicious-tasting oysters. On the boat ride you’ll see its most famous landmark: a huge red torii (shrine gate) rising out of the deep blue water. It guards Miyajima’s main attraction, the stunning Itsukushima Shrine, designated a World Heritage Site in 1996.

So even though your time in Hiroshima will be relatively short, in one way or another it will live long in the memory.