Probably the most iconic image of Japan. Mount Fuji’s snow-capped symmetry, rising to a perfect pinnacle at 12,388 ft is a magnet for climbers, tourists and artists. When you first lay eyes on its conical beauty, whether from Tokyo or from a cable cart in Hakone National Park - you’ll understand why. Visiting this UNESCO World Heritage Site is an unforgettable experience for any traveller to Japan.

There’s a Japanese proverb: “He who climbs Mount Fuji once is a wise man. He who climbs it twice is a fool.” The logic behind this is that the achievement brings a great sense of pride and personal satisfaction, but the climb itself is gruelling and the landscape close-up is quite barren – a world away from Fuji’s beauty when viewed from afar. Nevertheless, with hundreds of thousands of climbers and hikers reaching the top each year, there are obviously many wise people around (and probably quite a few fools too!). 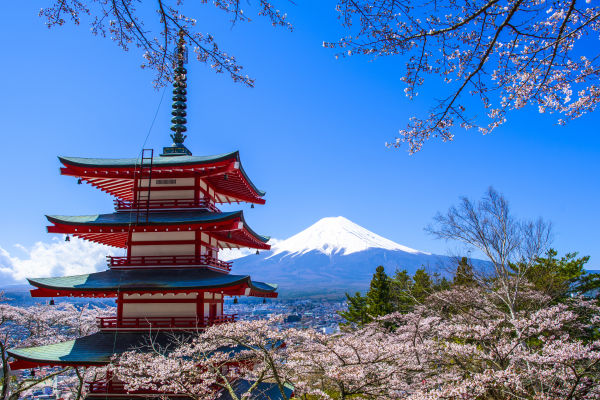 It is thought the first recorded ascent was in 663 AD by an anonymous monk. The first ascent by a foreigner was by Sir Rutherford Alcock in September 1868, from the foot of the mountain to the top in eight hours, and three hours for the decent. Not to be outdone, the following year Lady Fanny Parkes, wife of the British Ambassador, became the first non-Japanese woman to make the ascent.

Our excursion from Tokyo to see Mount Fuji and its stunning surrounds at close quarters will not involve any climbing. Instead, you’ll get an even better view courtesy of the Hakone Ropeway/Cable Car system. The Ropeway’s gondolas depart every minute from Sounzan Station for a spectacular 30-minute ride over a mountain to Togendai Station on the other side, which lies beside the beautiful Lake Ashi. Along the way, however, you’ll get off at Owakudani, the ropeway’s highest point, to walk the 30-minute Owakudani Nature Trail. Owakudani means “Great Boiling Valley”, and you’ll soon understand why when you see (and smell) the sulphurous steam escaping from fissures in the rock – living proof that the area is still actively volcanic. You might even want to commemorate your trip by buying a boiled egg cooked in the boiling waters! Returning to the station, you’ll board another gondola to complete a journey that affords fantastic views of Lake Ashi and Mount Fuji itself if visibility allows (though of course it can’t be guaranteed).