In the early 8th century AD, Nara became the first “permanent” capital city of Japan. Seventy-four years later, the capital was moved to Nagaoka, then Kyoto – hence the inverted commas. Nevertheless, that short period left a long legacy. Nara was the birthplace of Japan’s art, crafts and literature, influenced greatly by Chinese culture. Even the city itself, laid out in a grid pattern, was modelled on Chinese concepts. Buddhism also flourished, and Nara quickly became Japan’s political and cultural centre, with countless temples, shrines, pagodas and palaces. Amazingly, many of them remain intact, and are now enclosed in the quiet and peaceful surroundings of Nara Park. With eight UNESCO World Heritage Sites, Nara is second only to Kyoto as a centre of Japan’s cultural legacy.

The centrepiece of Nara itself is undoubtedly the Great Buddha (Daibutsu), one of the largest bronze figures in the world and certainly one of the most arresting sights in all of Japan. Originally cast in 746AD, it stands some 50ft high and consists of 437 tons of bronze, 286 pounds of pure gold, 165 pounds of mercury and… 7 tons of vegetable wax! The Daibutsu is housed in the Todaiji Temple, a soaring edifice presiding over Nara Park. Todaiji’s Daibutsu-den (Great Buddha Hall) is the largest wooden building in the world. When Emperor Shomu ordered the construction of both the temple and the statue, his vision was to make Todaiji the figurehead of all Japan’s Buddhist temples. One theory is that the building of the statue was meant to guard against a recurrence of the smallpox epidemic that had recently ravaged Japan. Whatever the rationale for this monumental work of art, it took eight castings to complete. Even more amazing is the fact that the present statue is only two-thirds the size of the original! Over the centuries it has been battered by earthquakes and fires and on more than one occasion lost its head. 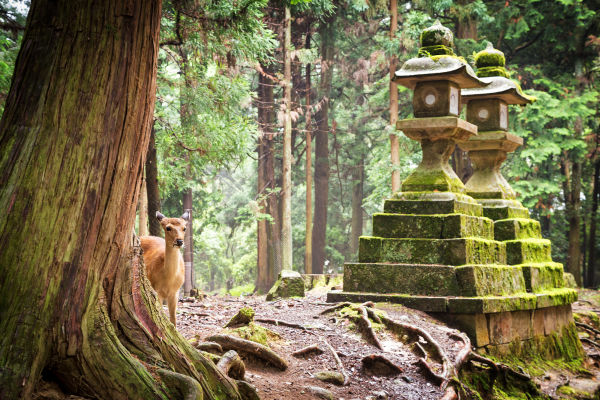 Incidentally, if you walk around the Buddha, at the back you’ll see a large wooden column with a small hole in it close to the ground. Apparently this hole is the same size as one of the Great Buddha’s nostrils. Legend has it that if you can manage to squeeze through the hole you’ll be sure to reach enlightenment. (A rare case of being rewarded for getting up someone’s nose). Needless to say, this feature of the temple is a magnet for kids.

The park surrounding the temple is an attraction in itself. With its ponds, grassy lawns, trees and shrines, Nara Park covers around 1,300 acres and is home to over a thousand deer. The animals are considered to be divine messengers, so they’re allowed to roam freely through the park. At places around the park you can buy crackers to feed to the deer, which all but the shyest fawns will usually take right out of your hand.