Combining war-time monuments, culinary delights and ancient imperial palaces, this 11-day tour of South Korea delves into its fascinating past and politically charged present. Travel from the modern charms of Seoul and coastal Busan to the historic treasures of Gyeongju and Andong, with exquisite meals and a visit to the North-South Demilitarized Zone completing your quintessential South Korean experience. 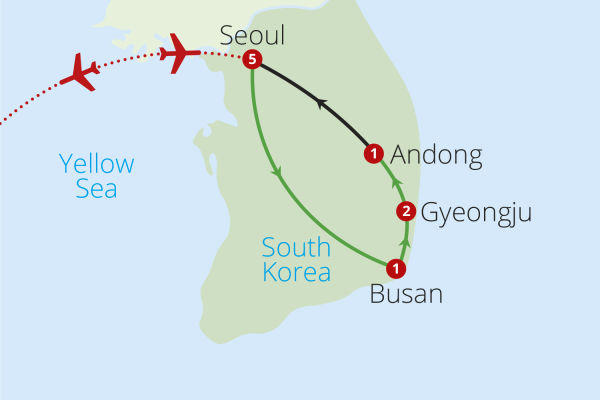 Each passenger is entitled to 23kg of hold luggage. There is also an allowance of one cabin bag not exceeding 25cm x 45cm x 56cm in size and one personal bag not exceeding 45 cm x 36 cm x 20 cm that you can take on the aircraft as hand luggage. Weight restrictions will be finalized on your final documents. Should you wish to take additional luggage you will need to pay an additional fee for this at check-in. Heathrow Airport advises that you should arrive at the airport at least three hours prior to your flight time for international departures. IMPORTANT: Please note that final flight details will be confirmed on your final documentation which will be sent to you approximately 10 days before departure. A printed E-ticket is no longer required at check-in, all you need to do is present your passport to the staff at the desk and your boarding pass will be given to you.

The minimum number of travellers in your group will be 10, and the maximum will be 40. If in the unlikely event there are less than 10 people booked on your tour date, we will endeavour to reduce any disruption to your holiday and try to operate your tour with lower passenger numbers. If we are not able to operate your departure date then you may be asked to change to a different date and a full refund will be made available to you should this alternative not be suitable.

The currency in South Korea is the South Korean won, known as KRW. We recommend that you exchange your currency before you leave the UK.