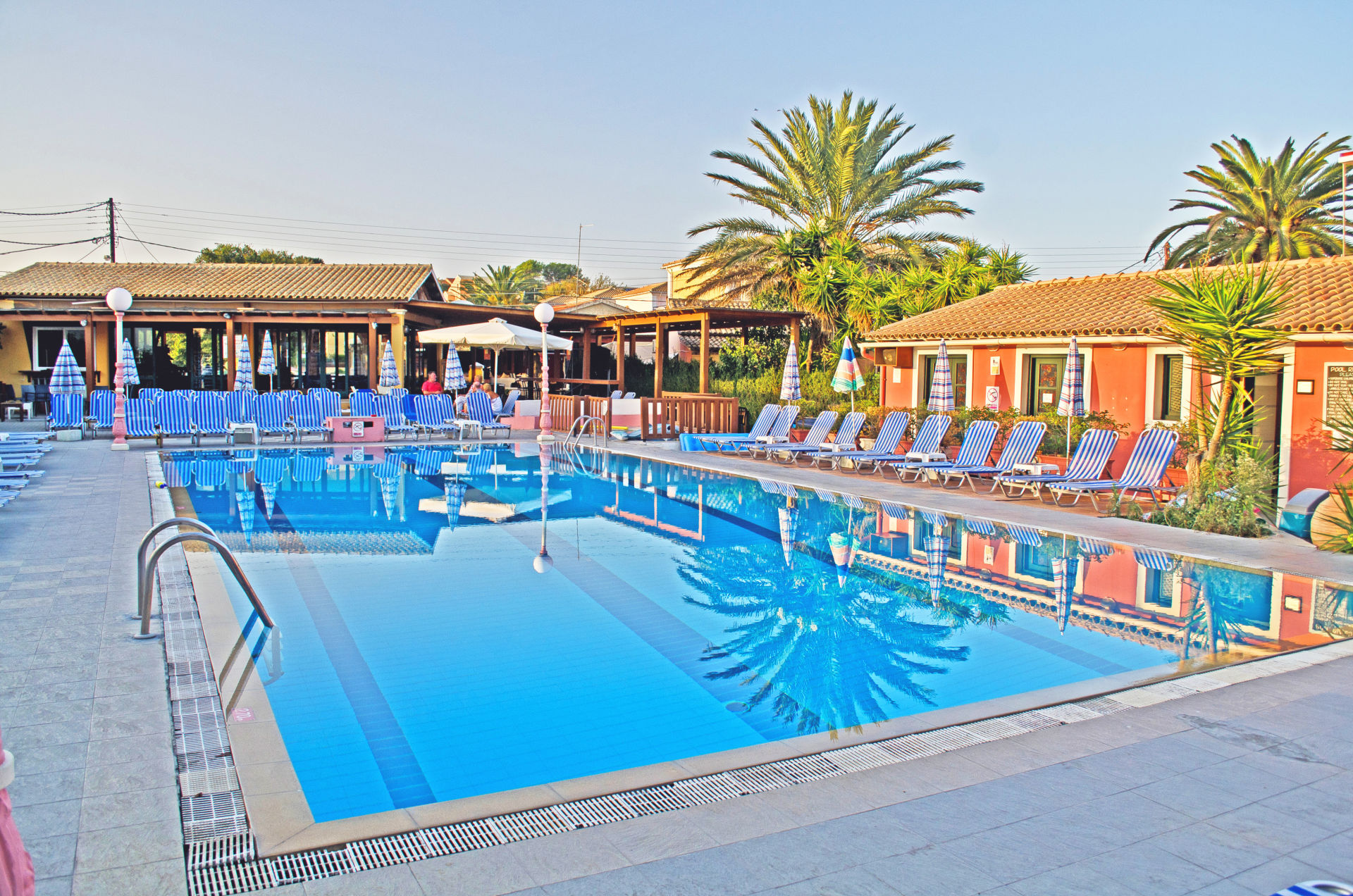 This well-located property is set in one of the loveliest parts of Corfu's picturesque northern coast, a few minutes walk from the idyllic swimming cove of Canal d'Amour. Sidari town centre is 30 km away and boasts a two-mile stretch of shingle and sandy beach, a charming harbour and a number of dining and entertainment options.

Apartments have en-suite facilities and a balcony/terrace with garden views. Additional facilities include satellite TV, a telephone and a safety deposit box*.

*Some facilities may incur an additional fee.

Due to the surrounding area and the number of steps around the hotel, it may not be suitable for those with mobility difficulties.

This well-located property is set in one of the loveliest parts of Corfu's picturesque northern coast, a few minutes walk from the idyllic swimming cove of Canal d'Amour. Sidari town centre is 30 km away and boasts a two-mile stretch of shingle and sandy beach, a charming harbour and a number of dining and entertainment options.

Arrived after midnight and was greeted by a happy gentleman named George, showed us to our room which we shared with our 7yr old daughter and 15 month old son, travel cot ready, 2 single beds and a double - great! Beds - are MAJORLY UNCOMFORTABLE :( both myself and partner were in agony, comparison very much like laying on a floor! This said they were clean, changed every other day as well as towels - the cleaners are lovely! Very happy, polite and appear jolly for any conversation! Rooms are basic, dated.. do the job for getting the head down. Bad side is the room became damp....

clothes in suitcases were damp.. bedding felt damp - even the night wear youd slept in 😕 - you couldn’t not sleep in nightwear due to the amount of mosquito we endured within the week! Between 3 of us we collected over a 100 bites 😳😂 All inclusive? Hmm.. there’s possibly a choice of 8 dishes per each meal time .. very very limited - no fresh fruit for snacks for the kids 🤷🏼‍♀️ We ended up eating out 5 nights out of 7 due to the poor section of food. If you like chips, nuggets and spaghetti every tea time - you’ll enjoy it 😳 Now we’re by no means fussy, we’re pretty happy like a pig in sh*t- but we were slightly disappointed compared to a previous all inclusive we had stayed in for the same price earlier in the year. Restaurant was clean, tidy.. with a side audience of cats.. plenty of them, waiting for scraps or having a scrap 🤦🏼‍♀️ or just causally jumping on the tables to eat the food left on plates left unattended 😩 Pool area is nice, pool is COLD but I guess refreshing.. kids loved it! Now for the best bit.. YOU MUST SEE THE BEACH COVES IN SIDARI - 5 in total - and there absolutely stunning! The water is warm, clear and active with little fish swimming around your feet! There is the opportunity to go diving off the cliffs on some of them which you’ll see many people do and the tricks using the current to get back out is an art - but you get it :) With us visiting in the October school holidays most places were closed as expected but places are still open for the locals which we was made welcome in, partner really enjoy a traditional Greek breakfast and my daughter the warm waffles, Nutella sauce and fresh strawberries! Meals for the amount you pay are amazing, most nights fed 4 of us for €20-24! 1 night we went to a restaurant that looks like china town and it was absolutely amazing! Best Chinese food we’d ever eaten - even in England! Ok ok.. I’ll cut the story short., Personally, there are plenty of nicer hotels about especially near the beaches and mountains - you get what you pay for. We Will 100% be returning to sidari as a family next year, not to summertime village though. If we hadn’t of hired of a car for 4 days I don’t think we would of enjoyed our holiday as much as we have if we had to sit by the pool all week! If your Coming to Corfu you must hire a car and see the sites, the beaches and buildings are amazing! The views from the mountains are something else.. !

I read the reviews and though it can't be as bad as people say, it was worse!! My children were crying to come home. We got there about 12, desperate for a cuppa,we were told to go buy a drink at the bar,where we meet a group of very drunk foul mouthed Brits. Next morning at breakfast we were meet by stray cats and dogs in the dinner hall, we tried to eat the cold overcooked food but couldn't even my 3 year old said it was yuk,so we are out...

Tried the food again at lunch,again cold, asked the "chief about temperature if the food and he said when the water under the tray goes cold so does the food!! Our shower leaked very badly, we used towels to clean up, asked for clean towels explained why and were told maybe after 3 days!! We have exposed electric cables and wires in our room. No windows in our "family" room/cell. My daughter got stick in the bathroom because the lock jammed. I politely spoke to staff aski g for them to sort the issues or give us a different room and was told if I don't like it get out and go to a new hotel. There are lovely food places near by with lovely Greek people which were usually full of summertime all inclusive customers who can't bear to eat the food. We spend so much spending money on food! We shouldn't have,we were all inclusive, this place is awful, all the locals know it. After many emails,phone calls to our supplier we were moved to a lovely family hotel which saved our holiday! Summertime may once have been a good place to stay,as it stands it need shutting down. DO NOT STAY HERE!!

Six of us, four adults and two children, one of whom is Coeliac, went to this hotel with some trepidation after reading the reviews. We went expecting the worst but having paid 2 star B&B rates didn't expect too much from all inclusive. Here's the lowdown on our experience...

Initially we contacted them by email with three requests. One was a kettle, which we got in one apt. Second was a ground floor apt as I am having trouble with my legs, back and heart, which we got. Third was that we were close to each other, which we also got. We got to our rooms and they were surprisingly clean. As time went by we found out that we had a lovely cleaning lady whom we developed a fondness for. She looked after us well. The room was in need of some TLC as follows; The toilet seat wasn't fitted on, that was fixed within a very short time of us reporting it. The beds were quite narrow but I've slept in worse. The shower drains stink somewhat but I'm used to that in med countries. There were plenty of sockets, unfortunately all of those on one wall didn't work but there was still enough. The lighting isn't very good but it's those crappy energy savers that the EU imposed on us and now want to get rid of in favour of LED. A peculiarity we found was that they expect you to wipe your bum and put the used paper in a bin by the side of the loo. Somehow we all managed to work around that.The doors to the veranda had been forced at some time so didn't lock properly but were secure enough. The room had a safe for which you had to pay 10 Euro to obtain the key (You DO NOT get it back). The food was not that bad. It was never very hot but it was warm enough to eat. There was a pretty fair choice of foods available but it is NOT 5 star, it is 2 star but quite edible and sometimes really tasty. One of the children with us has Coeliacs. We asked about Gluten free and took a translation in Greek to inform them. The first 2/3 times they were quite helpful but after that you could tell they were reticent to engage about it. One day we asked to speak to the Chef and he didn't want to come out. We checked at reception and they got him to come and sort things with us. After that we gave up and used our judgement and common sense. The all inclusive drinks was a strange affair. Upto 21.30 hrs, it is self serve with a large bottle of Ouzo, Vodka, Brandy and Gin (All local brands). A pump of lager type beer with Red and White wine, soft drinks and mixers all on draft. At 21.30 they promptly turn off the pool side lights and put the drinks away so you have to move up to the bar at the top end of the pool to carry on drinking. The all inclusive then ends at 23.00 promptly after which you have to pay for your drinks. As always, you get the usual drinkers whom don't think they had a good holiday if they haven't puked every night. That means the pool side toilets get disgusting eventually. This also means you are not likely to get a serene nights sleep, ever. Unless you could sleep through Armageddon. So, to summarise it,Would we stay again, yes. Why? For what we paid we were able to hire a car, hire a boat for a day, eat out several times and drink at different bars each day. Have a ride on an inflatable towed behind a speedboat and buy lots of souvenirs.So, if you want a holiday that is cheap where you can spend more on doing things, I would recommend this. If you have special dietary requirements that are complex, then I can't recommend here. As an aside, if you want to eat the local Gyros then go to the Kantina and don't bother with the others. They are the best in Sidari and we tried others but always went back there.

I went here last minute due to Thomas cook.i read the reviews but still went with an open mind thinking it wont be that bad,well...if you have children and expecting all inclusive i would avoid! There's no snacks or anything for them through the day.mine and my friends children refused to eat the food there except the chips at times we spent a fortune on having to eat out and having to buy snacks everyday. Not good for families who come with limited money expecting all inclusive. The staff are rude...

My friends toilet was running all week and wouldn't flush we told the manager he come in n listened to it we waited with the door open for him to not even come back and sort it!i only got clean towels and sheets once in a week.my friends daughter went n asked for clean towels to be refused them. My daughters bedside lamp flickered n buzzed like was going to blow up and scared her. Sidari is a beautiful place but this hotel ruined our holiday and was more expense. Some people say u get what u paid for...agreed if u don't pay alot your not expecting the Ritz and probably not that disapointing. But we paid a hell off alot off money for what we got then even more on having to eat out 2 or 3 times a day plus snacks.its a shame it has potential to be lovely but the staff just do not care.