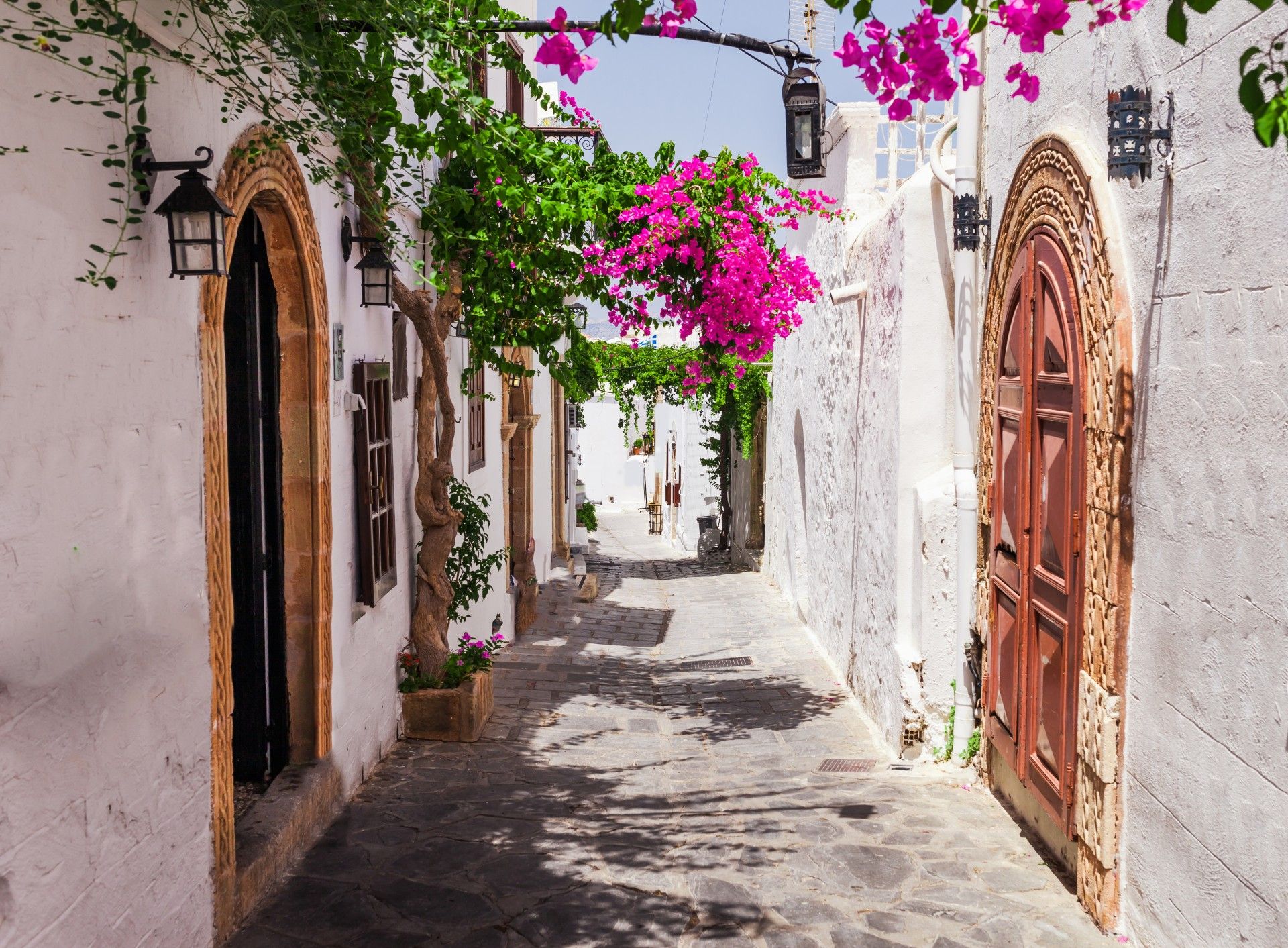 With a rich history, sun-drenched beaches, and its fascinating blend of cosmopolitan and traditional culture, it’s little wonder that Rhodes has become Greece’s most visited island.

If you’re looking to journey into its culture, potter about on the stunning coasts, immerse yourself in the crystal-clear sea, or party the night away, Rhodes has everything you could want.

With around 300 days of sunshine every year, you’ll actually be hard-pressed to find a time when it’s not a good idea to visit Rhodes. It has a Mediterranean climate, which means hot summers with averages of around 28°C in July and August. Though this rarely feels too hot, thanks to the regular cool breezes the island enjoys.

If you’d like to avoid this very peak time, you’ll be pleased to know that the climate is warm and dry, with very little rainfall, from June through to September.

The Faliraki-hosted Festival of Saint Amos is a celebration of the saint and the Monastery of Prophet Amos around which it takes place. There is a feast of food and wine, Greek music and dancing until the wee morning hours.

If you’re there in late May, head to Mandraki Harbour where you’ll be able to catch the colourful floats and fancy dress of the Rhodes Flower Parade. Held on the last Sunday of the month in Rhodes Town, you won’t want to miss it when this bursts into life.

If you find yourself in Rhodes, chances are you’re there, at least in part, for the beaches. It is home to some 31 Blue Flag beaches, dotted along an almost uninterrupted trim of sandy coastline.

Agathi Beach should be your top pick if you’re looking for something discreet, owing to the lack of nearby high-rise hotels. Equally serene, but with a dash of history in the form of the ancient remains of the Roman bath house, is Kalithea Beach. If you’re looking for sun, sea and sand with a bit more life, the scattered restaurants, bars and crowds of Faliraki Beach should appeal to your energetic penchants.

Rhodes has on offer some of the best restaurants available anywhere on the Dodecanese islands. The authentic tastes and carefully prepared dishes of Tamam are incredibly popular. For a slice of Italian, check out Pizza il Posto or a spot favoured by the locals, Mageirotechneio Paraga has exquisite Greek cuisine.

For all-out action, look no further than Faliraki. If you want beaches, history or fine dining, other places on the island will suit your needs better, but the nightlife and party-scene of this busy resort cannot be topped. Famous spots include Bondi Bar and DC Club. Ialysos also has a good selection of bars and nightclubs.

The island is chock-full with ancient ruins, some that date back to the time of the Trojan War. The ancient remains found at Acropolis of Lindos is truly something to behold, while the best museum of the region, the Archaeological Museum, can be found within Rhodes Town.

Rhodes Town is also a great place to get lost wandering the Medieval maze of streets which date back to the Byzantine Empire.

Great snorkelling spots, plus the chance hire a canoe or pedalo and mosey out onto the calm and shallow waters of Lindos Beach is a great way to spend the afternoon. To see a bit more in a shorter space of time, the jet skis of Faliraki (where else) will have you skipping over the seas like a pebble on a pond.

If you’re feeling particularly energetic and ambitious, the challenging 3-hour climb of Mount Attavyros to reach the highest point in the island will present you with views that are out of this world (so we’re told!).

Rhodes Town is the hub of all public bus lines, with routes starting here and reaching practically every spot on the island you could wish to explore. With such a popular destination, taxis are, as you would expect, easy to find and abundant in number.

Premium All Inclusive from