Strewn with jagged black lava rocks, an eerily desolate landscape forms a dramatic backdrop for the motionless waters of the Blue Lagoon. Situated upon an isolated lava field in southwestern Iceland, this spectacular geothermal spa has rapidly become one of the nation’s most popular attractions. Reaching temperatures of 39 degrees centigrade throughout the year, visitors are attracted from across the globe by the lagoon’s striking milky-blue waters, where a drifting cloud of mist dances upon its surface.

How was the Blue Lagoon formed?

Positioned upon the Mid-Atlantic Ridge, Iceland is renowned for its long history of utilising natural underground heat sources. However, contrary to popular belief, the Blue Lagoon is not a natural hot spring but is in fact a man-made structure built in 1976 on the site of the Svartsengi Geothermal Power Station. Vented from naturally heated underground resources, superheated water is processed through turbines, where steam and hot water are passed via a heat exchanger and eventually released into the nearby lava field. A bed of mineral salts, algae and silica mud fundamentally obstructs the water from trickling through the lava, consequently resulting in the thermal pools of the Blue Lagoon. 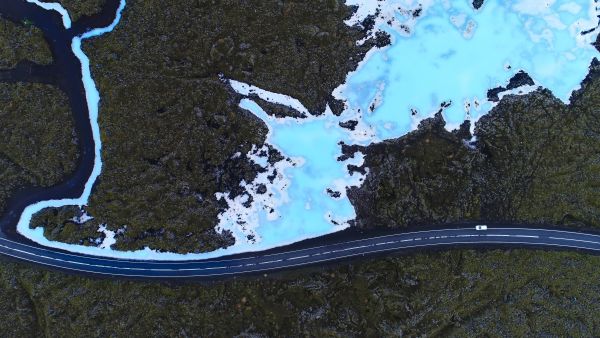 Why is the Blue Lagoon so popular?

With a number of natural hot springs and thermal swimming pools scattered across the country, Iceland has always had a strong affiliation with bathing. After the bathing facilities of the Blue Lagoon were opened in 1987, whispers of the waters’ skin healing qualities began to circulate and an intense love affair with this national treasure was established. On the base of the pool, a thick sheet of soft white mud is formed, containing a nourishing tonic of silica, healthy algae and salt, believed to be a wholly therapeutic substance for those with skin irritations. Visitors to the blue lagoon rub this smooth mud onto their bodies and enjoy the benefit of naturally cleansed and moisturised skin. 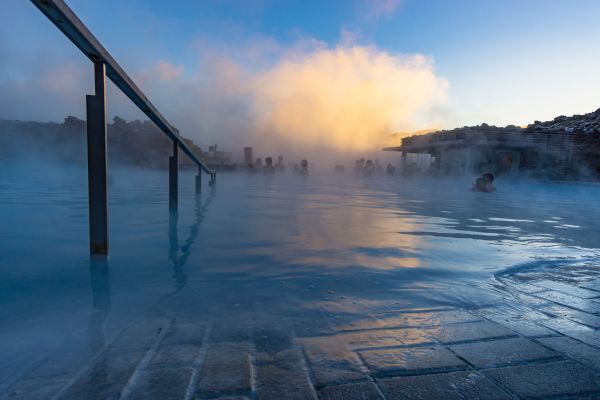 As Iceland is known as one of the most eco-friendly places on earth, the Blue Lagoon’s ability to utilise natural resources is a huge advantage. Although having significantly expanded in size to accommodate its ever-increasing popularity, additions to the site including restaurants, cafes and gift shops, were constructed using natural materials to echo Iceland’s simplistic basalt landscape.

Uncompromised by its increasing popularity, only a select number of visitors are granted access during each session, so make sure that you book before you visit to guarantee admission! Whilst most people enjoy bathing in the lagoon for around 2 hours, there is plenty to do to keep you occupied afterward; an indoor sauna room or in-water massage is an excellent way to indulge in relaxation, whereas a seven-course meal in one of the spectacular on-site restaurants provides the perfect opportunity to savour the delights of authentic Icelandic cuisine, in unforgettable surroundings.

A visit to the Blue Lagoon in the early morning is the perfect chance to avoid larger crowds. However, many people choose to visit in the evening for the opportunity to catch a glimpse of the fading sun, with the added possibility of spotting a spectacular display of the dancing Northern Lights after sunset. Be sure to keep a close eye on the opening hours, because these fluctuate during the summer and winter months!

Tours of the Blue Lagoon