One of the most popular attractions in Iceland, the Gullfoss Waterfalls showcase the natural grandeur of this location. Accompanying Thingvellir and the Geysers of Haukadalur, the glacial waters of Gullfoss Falls constitute a third of the Golden Circle, one of the Nation’s most travelled routes, encompassing some of the most striking sites in all of Iceland.

History of the Gullfoss Waterfalls?

Once a desolate landscape of basalt lava rock, a catastrophic flood during the Ice Age ferociously sliced through this jagged terrain, establishing a deep ravine in which the Hvita River continues to flow. The cataclysmic surge of water is believed to have measured at around 2,000 cubic metres per second, which is astonishingly the same rate that it would take to fill one Olympic sized pool every second!

A masterpiece of mother nature, the landscape of Gullfoss Waterfall has scarcely altered over the course of its existence, however, during the early 20th century, plans to develop the Falls into a hydro-electric power plant were outlined by foreign investors, who favoured exploiting this breath-taking land for financial gain. Whilst widely considered a myth, legend states that this captivating landscape was spared from destruction by the daughter of Tomas Tomasson – Gullfoss Falls’ owner. Sigriðus Tomasdottir threatened to plunge herself into the falls in a bid to prevent total devastation to a land she deeply cherished, and consequently, the waterfall was handed to the state of Iceland. Protected as a nature reserve by the state in 1979, a memorial in her honour proudly stands as a reminder of her commitment to the falls.

What is the Gullfoss Waterfalls?

Fuelling its winding torrent, meltwater from the Langjokull glacier flows south towards a ‘staircase’ of plunges, where water leaps from an overall height of 32 metres, tumbling down two enormous drops along its route. Caused by its immeasurable intensity, a continuous plume of mist is thrown upwards, producing a golden hue or shimmering rainbow as the sun perfectly catches the drifting haze, and, translating as the ‘Golden Falls’, Gullfoss was purposely named after this glistening chroma. 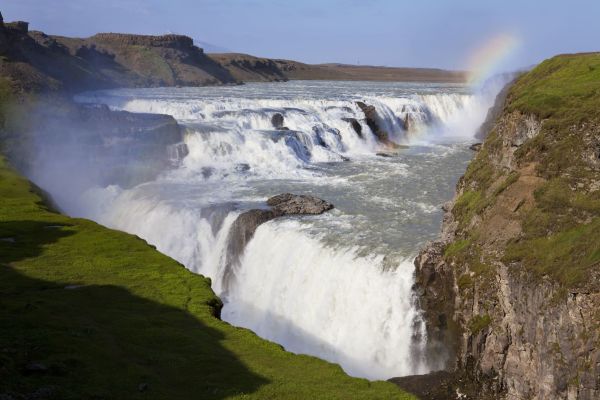 Why visit the Gullfoss Waterfalls?

In a nation littered with otherworldly landscapes and breath-taking examples of natural magnificence, Gullfoss is not only Iceland’s tallest waterfall, it is also considered one of the most astounding creations of mother nature. Narrow paths located alongside the mighty torrent allow visitors to get as close to the Falls as possible. However, vantage points are distinctively unique in comparison to countless waterfalls across the globe, as elevated views from its highest peak overlooking the gushing waters that thunder into the abyss below.

Open throughout the year, Gullfoss Waterfalls seamlessly acclimatises to the changes in weather, with vistas fluctuating as each season passes. Whilst the summer sun beams down upon the cascading river, a blanket of snow dramatically accompanies minute speckles of ice which glisten above the thundering deluge of water during the winter months.