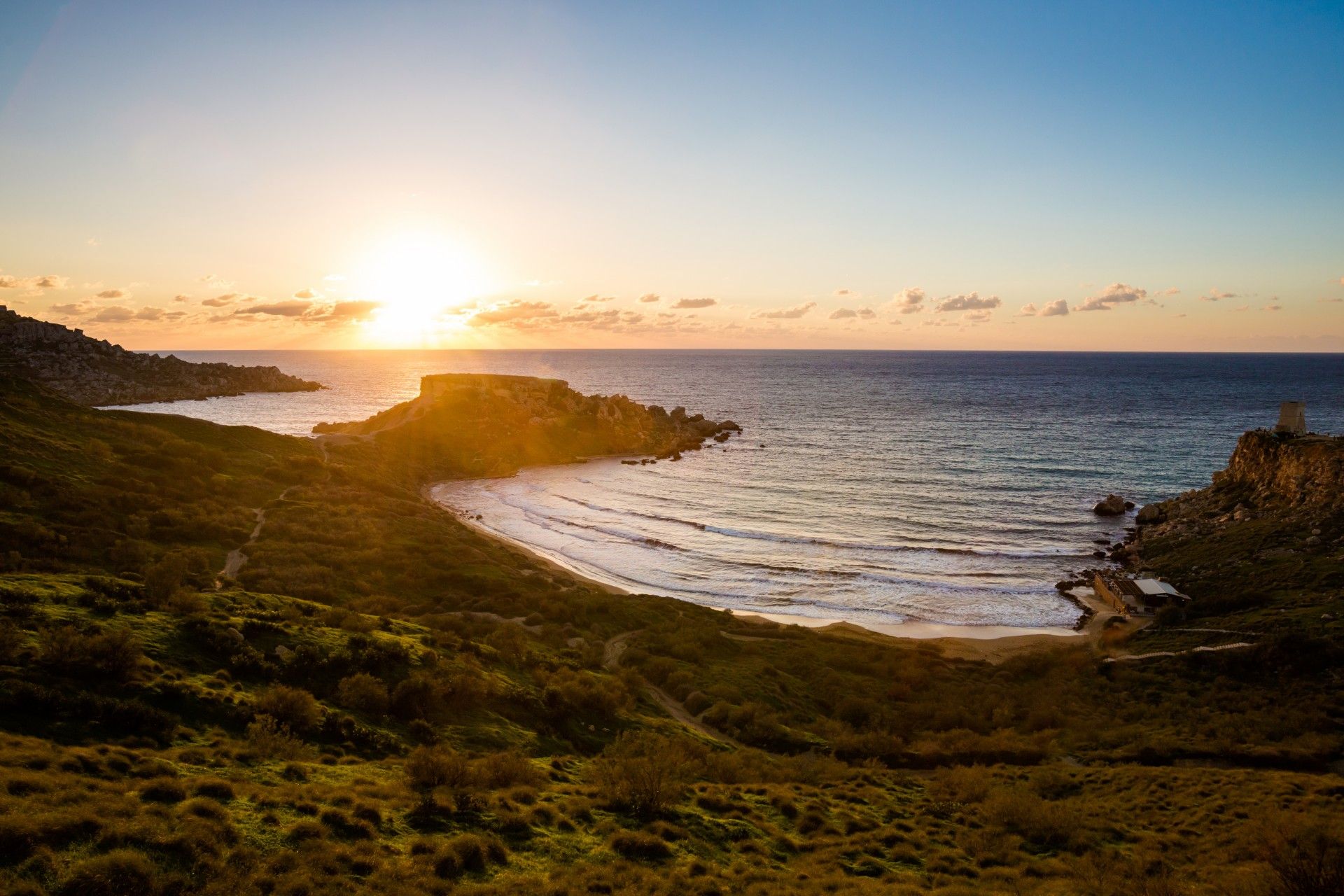 Located on the north-west coast of Malta, Golden Bay offers holidaymakers one of the best sandy beaches on the island. Whereas most of Malta is known for its rocky coast, Golden Bay bucks the trend, offering visitors a long crescent sweep of brilliant sand, washed by the warm waters of the Mediterranean.

Well worth a look while on holiday in Golden Bay is the island of Gozo, just across the water accessible by the Gozo Ferry at Cirkewwa, as well as the resort towns of Mgarr and Mellieha which are just a short distance away.

Peak tourist season falls, as with other places in this part of the world, in the summer months of June through September. Visiting at this time will let you enjoy temperatures in the mid to high-20s.

For weather that’s almost as good, but with a better chance of avoiding the crowds, April and May offer far better options. It is in the springtime when you are most likely to catch one of the many festivals taking place on the island, too.

Situated beneath a dramatic sheer cliff, upon which the resort’s best hotel is perched, the aptly name Golden Bay provides visitors with an idyllic beach to savour. Widely considered to be in the top two of the island’s beaches, if not the very best on offer, if you decide to go to this serene resort, the beach will likely have been the biggest attraction.

When you wish to leave the sun loungers behind, the distinctive wildlife and fantastic snorkelling to be found at the Il-Majjistral Nature and History Park makes for a noteworthy daytrip.

The buttery sand and turquoise waters of Golden Bay’s beach should have everything you desire in a shoreline, plus the remarkable backdrop, stunning sunset and fantastic snorkelling make it difficult to surpass.

If you like to get about and take in a bit more of the coast, there are a couple of other beaches of note, namely Gnejna and Ghajn Tuffieha.

There are plenty of budget-friendly options in the form of kiosks and fast-food joints, but for a fine selection of cuisines, heading up the cliff and into the vast Radisson Blu Resort and Spa is your best bet. You can guarantee that the sunset views on offer in some of the establishments will be breath-taking. For more selection, and something a bit livelier, you should consider heading to the nearby towns of St Paul’s and Bugibba.

The Malta International Fireworks Festival and The Malta Jazz Festival (both held in Valletta) are stand-out events in the island’s calendar year.

Or for an occasion steeped in a bit more history, Silema’s Feast of Our Lady Stella Maris is accompanied by fireworks, an open-air concert and mass, all in homage to the statue of the saint Stella Maris.

After a megical clifftop ride provided by the Golden Bay Horse Riding club, sit back and relax with a cocktail as you watch the glorious sun set over the landscape.

Back at the beach, there’s a selection of water sport and boat trips, not to mention the fantastic snorkeling in the bay itself.

There is public transport in the form of buses that connect Golden Bay with all of the major resorts and towns including; Valletta, Sliema, St. Paul’s Bay and Buġibba. There are also taxis available and asking for help arranging one at the hotel reception would make the process that much smoother.