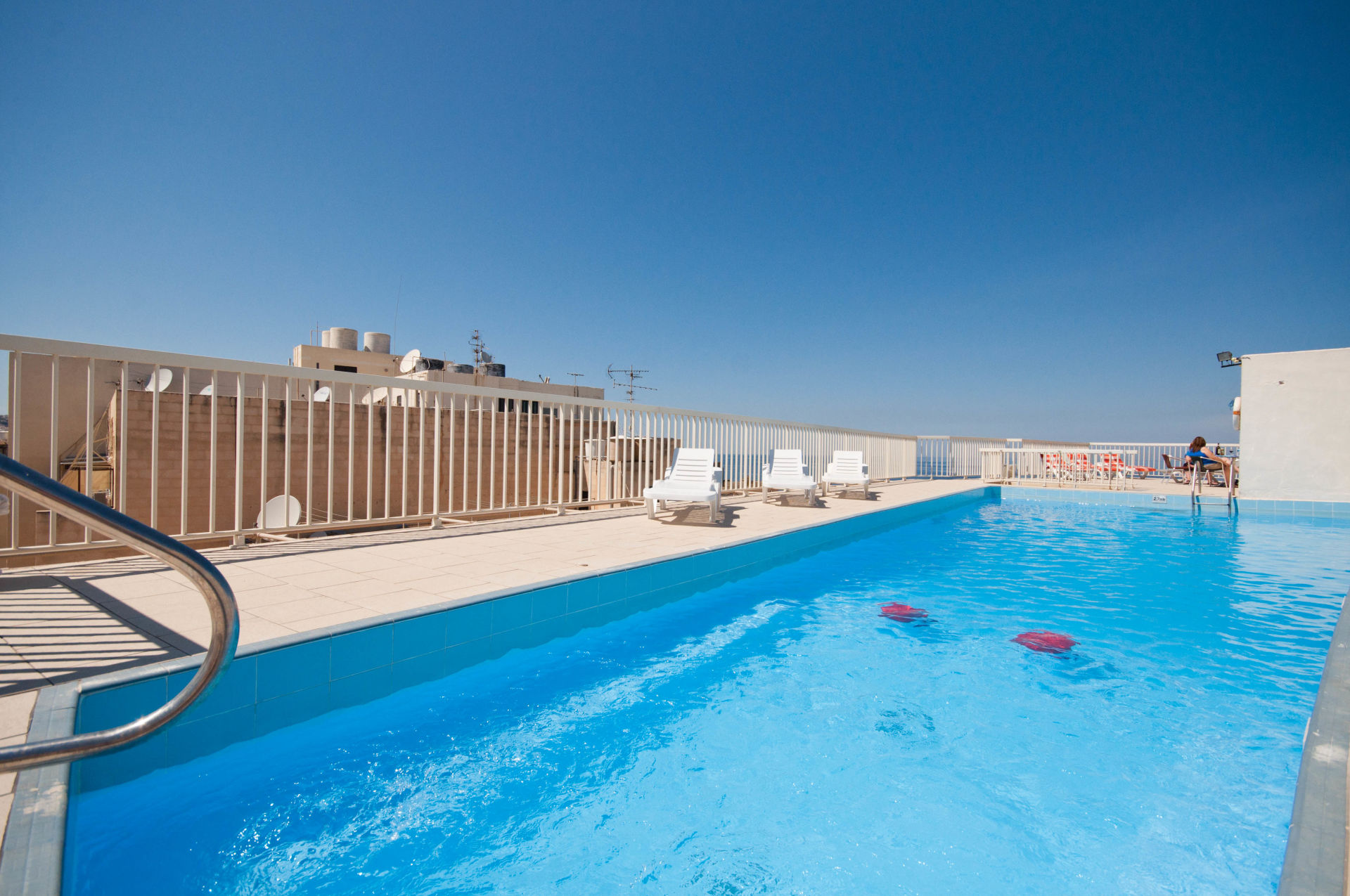 Sliema's many shops, bars and restaurants are all close at hand and there's a real feeling of being at the heart of things when you're staying at the Diplomat Hotel. The Sliema casino is a stroll away, as is the IMAX cinema and Super Bowl. Truly, this is the place to be for a best of both worlds holiday – exciting entertainment and exhilarating views – you can have them both.

You might be forgiven for thinking that the Diplomat Hotel trades purely on its enviable location; not a bit of it. It's just as well regarded for its amenities and for its four star standards. This isn't just a place to stay, but a welcoming and comfortable home for however long you're lucky enough to stay.

The air-conditioned twin rooms are all tastefully furnished and arranged and all come with a small side sea view balcony. Each has an en suite bathroom and, wonderfully, an orthopaedic mattress. So you can see, your comfort is very high on the list of priorities!

You can pay a supplement for a sea view room with a French style balcony – it really is worth it. But even if you don't, each and every room will feel like home. Your amenities include satellite TV, direct dial phone mini bar and drinks making facilities. And don't forget, the excellent hotel staff are on hand to ensure you're well looked after.

Even with all of the attractions and entertainments of Sliema to enjoy, the Diplomat Hotel gives you more. You'll love the rooftop pool and the hotel bathing area – a magnet for sun-seekers and swimmers, and you'll even have free access to a nearby seafront lido with watersports and scuba diving on offer.

Getting to know Sliema can become a bit of a passion. With so much to see and do, and such a wonderful hotel to see and do it all from, you'll be perfectly set up to make the most of your Maltese holiday.

This hotel enjoys a superb seafront location on the Sliema promenade and is well situated for the area's shops, bars and restaurants. The bus stop to Valletta and other major cities are just a few meters away from the hotel. The Lobby Bar is open daily till the late night serving tea, coffees, snacks and cocktails. The Pub is open daily in the evening from November to March. Live football transmission of Premier League matches are screened daily and a happy hour is promoted daily in the evening.

All rooms have free wifi connection and an internet café' is also available. The Sun Terrace is open during winter, weather permitting. A reading area and a small library are available during the day.

It's the staff that make this place

The hotel is located in an excellent position right on the promenade with easy access to buses, ferries or walking distance from cafes etc. The room was clean and a reasonable size. The staff were all, without exception, helpful, friendly and sincere...

This makes such a difference to a hotel, especially as a solo traveller, as I felt very welcomed from the reception to the bar, and also in the restaurant. The other guests were also very friendly and inclusive as many seem to visit year and year, and know the staff. The chefs would always take the time to have a quick chat and ask how your day was when you went up to the buffet. One of them is English and the other Maltese, and both very nice and I enjoyed chatting to them when I could. The other restaurant staff are friendly and nice too - there is a very slender girl with long dark hair who was always as helpful as possible, and Vlado who was very smiley and nice :) I am currently writing a book about life on Malta , so if any staff wanted to get in touch then I would be grateful to hear from them. There was enough of a selection of food each day without there being too much, and always something tasty to have. The only thing was a greater selection of fresh fruit would be good as it tended to be melon each day, apples or oranges

Loved the hotel and its perfectly located in city centre to visit all the places and exploring Malta. The rooms were. Ie and with the view of sea and the sea was just walking distance...

I wonder whether we stayed at the same hotel as my review is completely different from some of the previous reviews. We were checked in our room at about 8pm, no problems whatsoever by a friendly young lady. We had booked a partial sea view.When we went up to our room we were highly delighted to find we had got a sea view room with a side windows.Brilliant, we did not expect to be upgraded😀 Brilliant views for 180 degrees...

We were staying half board so went down to dinner. What a surprise, there was so much to choose from. There were numerous different types of salad dishes to choose from and the usual salad, tomatoes, cucumber lettuce etc. The mains consisted of a different soup every night, and a pasta starter. The mains were always a different fish dish every day, perch, salmon, tun a to name but a few , meat, including leg of lamb carved straight from the leg, roasted gammon, carved the same way, rabbit, duck, beefsteak to name but a few dishes. Vegetables were too numerous to list, but all very tasty. There were numerous puddings and an assortment of cakes. Cheeses and biscuits, fresh fruit. Breakfast was delicious too. Fresh fruit, different cereals, bacon, sausage, tomatoes, scrambled eggs, boiled eggs, beans and other breakfast items. There was also continental breakfast, fruit juices, lots of types of bread.tea, coffee of different types. Ian the chef was a brilliant man, always happy, informative and a pleasure to meet . Ian you are a credit to the hotel. .Evelyn and Joey the waiter and waitress were equally a credit to the hotel, always happy and helpful. As was Carmen the housekeeper, also a credit to the hotel. The rooms were always spotless. The beds were very comfortable and we slept well.Towels changed every day, they were pure white and fluffy.There was a bar where you could get snacks and drinks on the ground floor, a pub on the first floor. We did not use these although they looked great. the hotel was close to bus stops going all over the island.
Walking distance to Nearby resorts. Buy yourselves a Malta transport 7 day pass €21, well worth it as you can use it to travel around the island. A must to visit is The three cities. Not to be missed, so much history there. You can also use the travel ticket on Gozo which is a must. Would we stay at the Diplomat again? Without a shadow of doubt.
Thank you all for making our stay so special.💕💕

Hotel is in a very good location - bus stops are very near for either direction. When entering the hotel it took me back to when I first stayed in a hotel back in the early eighties, it's dated which is ok but it needs to be refreshed, a good coat of white paint would help, reception is tired, white paint and a few soft touches like fresh flowers or bright paintings would help.

I never had a problem with the staff, reception did their job, didn't go out of their way to welcome you but just did what they had to do. Resturant staff were all lovely, would get a morning, how are you from the very slim, older lady with glasses, she was always going back and forward carrying plates...

The 2 other ones that always wore heels, both doing a good job of filling up the milk, ceral, bread etc. Then of course the lovely little girl from Nepal, sorry can't remember your name but I think it started with a B. The cleaners that I saw were all nice - they all did a good job.

Resturant is down in the basement, that needs a good clean and a paint, get rid of all the rubbish stuff that's on top of the serving counters, fake fruit and vegetables, too more clutter, get rid of the pictures on the wall - could replace with nice bright paintings of Malta, nice hand painted picture of the beautiful bays there and colourful boats, could have one of Mdina, horse and carriage and lovely flowers - it needs to be brightened up, it's dull down there also cold feel as though your sitting in a draft.

Food - was there for 2 weeks and had a few nice dishes, like the meatballs, the turkey and chicken. The rest is not good, salad choice is very poor. Vegetables - potatoes were often under cooked and the veg were frozen, cauliflower and brocolli were fit for the bin only. I don't understand were food was poor as puddings were brought in, cream cakes loooked nice but they all taste the same, just different colours, coffee one was the best and the apple pie, every day was cream to pour over it, never ice cream or even a yogurt pot in case you didn't have a sweet tooth. Fruit was apples or oranges or if lucky bananas. Basically all chef had to do was do a meat dish which the oven does most of the work, soup would also would just be a packet mix. breakfast was alright, so use to fill up on that. They did have a choice of milks, pink yogurt and tinned peaches which i thought was odd, some melon which was tasteless.

The bar area is horrid, dark, depressing, chairs needs replacing - no comfort in there at all plus not that big.

Looks of people I spoke to go back every year so maybe it's just me. I didn't have a bad time but i was out every day sightseeing, it's not a hotel where you feel nice to relax in your room, there no balconies where you can sit out on a chair etc, this hotel is purely good for a base to go sightseeing. I will certainly return to Malta but not to this hotel, it was ok for the price but i would rather pay more and go somewhere else.

Check out is at 11.00, if you have a late flight the suitcase is just left in reception, it's around a corner and by reception area but would prefer a secure room.

Nearly forgot - beds and pillows were very comfortable. Hotel is very quiet at night, but got woken most mornings about 6 ish by the bin men, obviously not the hotels fault.

Central for various destinations,Good views and great service by staff.

The Hotel staff were very friendly and helpful with good service, good food and the drinks were reasonably priced. The hotel was clean and comfortable and central for everything, not far from bus stop or for walking. We enjoyed a few nights sitting on the front terrace at night after sightseeing which we found relaxing and cosy...

The swimming pool was relaxing and a welcoming asset to the hotel, loved having a dip in there and having a few drinks and snacks at the pool bar.