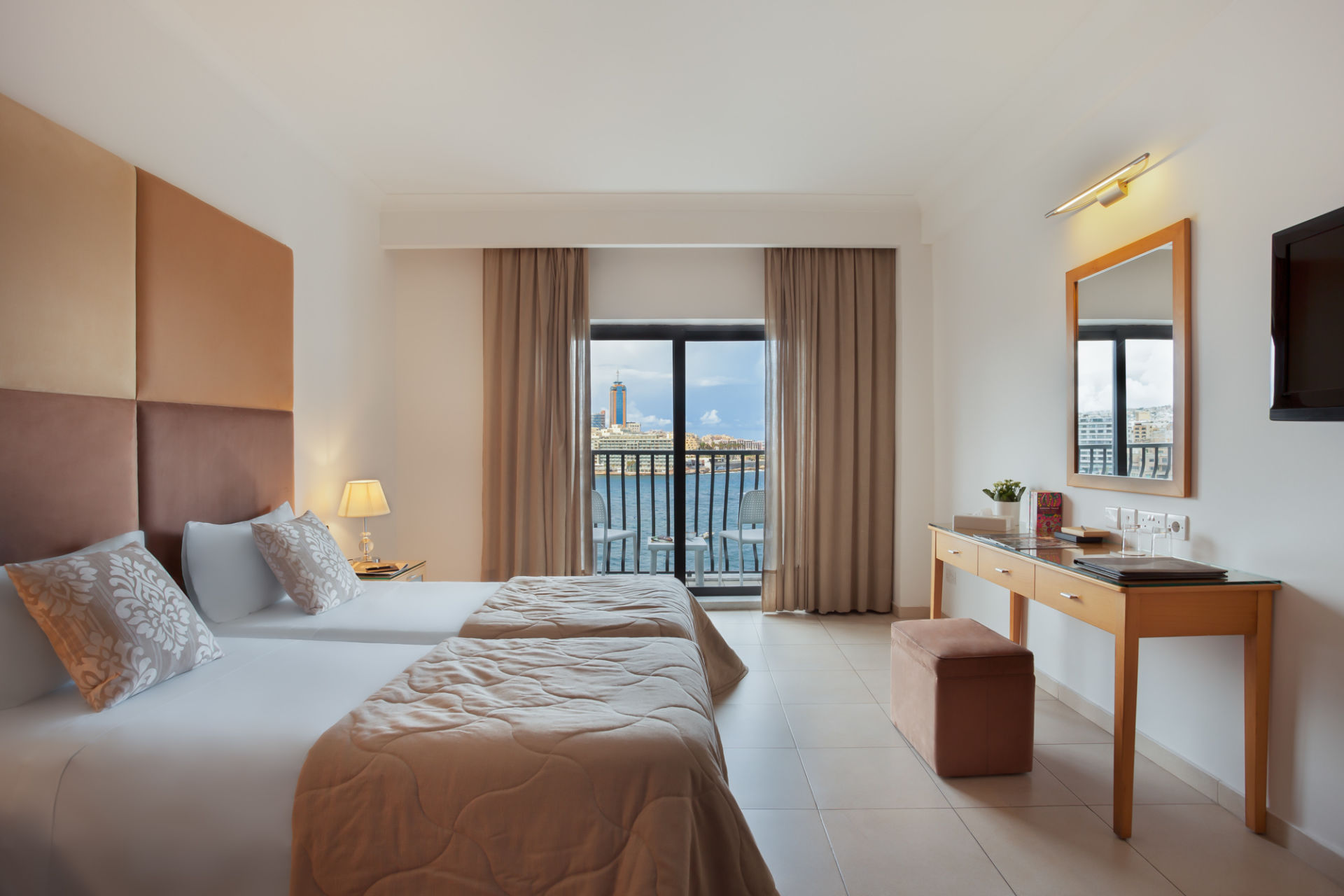 Fashionable Sliema is one of Malta's finest resorts. It's got it all: big beaches, blue waters and some of the country's best shopping. Holidaymakers flock here for its fine diving (and dining on the Promenade). While some people keep coming back to Sliema because they like the people of Sliema so much. It's a warm, friendly place, where the locals are always ready to pass the time of day with you. And anyone who chooses the Plaza Hotel will feel right at home in the middle of this vibrant community.

The Plaza Hotel offers a prime location and facilities in the heart of Sliema:

Situated on the Sliema coast road, the Plaza Hotel is undoubtedly one of Sliema's finest. Close to the Promenade and boasting impressive views, it's a hub of activity, with snorkelers and shoppers and sightseers all converging here. Sliema's Promenade – lined with shops and restaurants – is close by, and you can look out over Ballutta Bay and the wonderful beach from the hotel. The local bus service gives easy access to the capital, Valletta, and plenty more places of interest.

As you'd expect, the twin and double bedrooms are all air-conditioned and feature satellite TV and radio, hairdryer and telephone. Side sea view, Sea view rooms are also available at a supplement, as are Superior rooms which come with their own balcony & sea view mini bar & tea & coffee facilities. Safes are available in all rooms at a supplement.

There is a choice of indoor and outdoor pool (available between May – November), as well as a children's pool. For those lazy days at the hotel, there are sun terraces for you to lie back and soak up the sun.

Guests have a wealth of places to eat and drink all within the Plaza Hotel; including a superb penthouse restaurant, pizza and pasta restaurant, lounge, bar, coffee shop, and snack bar.

Think of Malta and chances are everything you can think of is a stone's throw from the Plaza Hotel. The beaches with their large, smooth pebbles; the clear waters and rocky pool; the café culture and laidback nightlife; the cosmopolitan shopping: you'll find it all here.

Due to the surrounding area and the number of steps around the hotel, it may not be suitable for those with mobility difficulties.

The attractive Plaza Hotel lies on the coast road of Sliema, near St. Julian's. It has views of Ballutta Bay and is close to the promenade and an attractive rocky beach.

The many shops, restaurants and bars of Sliema are within a mile of the hotel. Entertainment is laid on two or three times a week. It is an ideal situation to enjoy the attractions of this resort area, while Valletta and places further afield are easily reached via local bus services.

The best in this hotel is the view..they cant mess it up. Breakfast is of poor quality and completly unorganized since its served di to corona. Ymtbey take the order, forget things every time and are slow...

In the room safe and TV did not work upon checked in and it tone 2 days before the TV worked. Water from the tap is rosty.

No beachtowel not even against payment the reception sad need to buy yourself and smiled.

I’ll get the worst over with first. Ok, it was cheap. But it’s March, Malta is next to Italy which is currently in lockdown, and tourists are currently not going anywhere...

Tried to check in at 12 but was told to go away and come back at 2, then given my key. I opened the door and the smell knocked me over. A tiny box room, with a little window (opaque so no view outside) which reeked of B.O and stale smoke. I went downstairs and they expressed disappointment as they’d upgraded me! The second was much the same, this time with a window that you could see through at some flat roofs, but now with a much smaller tv. I asked at the desk how much an upgrade would cost and it was twice the price. I left to eat and decided I couldn’t stay for a week in such a room so called and and asked if I could be refunded my money and go elsewhere. They said no, then put me onto the Manager. She tore into me with an angry tirade asking what I expected! Finally she said she’d give me a third room but if I didn’t like it I could pack my bags and go back to England! That room was ok so I accepted it.

The bathroom, very nice with large shower, looks modernised. Sachets of shampoo! Not seen those since the ‘80s! The website advertises fridge/minibar and tea/coffee facilities. No, there wasn’t, and previous reviews have mentioned this. The safe wouldn’t work. The large, good quality TV with a massive number of channels had many national channels; Italian, French, German, Spanish, even two Dubai and the Al jazziera etc on offer, but no British! So with two thirds of their guests British, they have to watch news on the French TF English language channel. Bizarre. The windows are double glazed but ineffectual against outside noise from traffic. I didn’t bother mentioning the kettle/fridge/safe issues as I didn’t want my ear bashing by the manager again! That night I realised the mattress had a plastic cover. Good grief!

For most of my stay only one lift was available, with the other notified as not working. The staff thought nothing of wheeling their service carts in, pressing the guests against the wall! There is a small, soulless and unwelcoming bar at the back of the hotel. The others were out of use or being refurbished. I made breakfast half of the days but only once was the orange juice dispenser working, the other times just poured out water. The dining room staff, in common with all the other staff, seemed uninterested and demotivated. By the rear lift there was a small office that made the corridor stink of smoke, the staff obviously smoke inside the hotel. Everything about this hotel shouts out that it is badly managed.

I never give one stars because they are usually given spitefully and over a single issue, but boy, this came close, (I changed the rating after this draft) mainly due to the attitude of the manager I spoke to, and the torpor of the staff. I would certainly not recommend this place and it cast a shadow over my entire week by getting off to such a bad start. I also wouldn’t recommend that area of Sliema either. If you do take a risk on this place, don’t pay until seeing the room and confirming by email first that the advertised facilities actually exist.

All before was drafted before my last event: I asked in reception if I could have an iron and board. To my astonishment she wanted €25 as deposit! Am I going to sneak them into my cabin bags? Then, I was told I had to cart them from reception up the stairs to my room myself! The final straw was when I went down to reception to check out. I asked for a taxi booking and she said it would be 20 minutes. What she didn’t say was this it would be 20 minutes before she rang for one! My arrival was put under a cloud by the rooms and the behaviour of the manager, and now that and the ironing board issue will be my parting memories, so my first ever 1* ; the whole experience was awful.

The hotel have a good spot. Breakfast is great a lot of choices. Clean room. Good sea view friendly staffs specially to (Milos,Leonard & Jan) they are so generous!!...

Hope to see all of you again this year.

Good base for exploring

The hotel itself was an average 3*. The room was basic but clean and functional. There was no tea/coffee provision as advertised...

Breakfast was plentiful, with good choice. We didn't eat any other meals at the hotel so can't comment on the rest of the menu.