Beaches of the Algarve

The Mediterranean climate sees average temperatures of around 15C in the winter months, to 30C in the summer, and boasts more hours of sunshine per year than California! It’s no surprise, then, that holidays to the Algarve are in such high demand. Of the 200 kilometres of coastline, the beaches vary from sheltered coves, to long stretches of sea-washed sandy shoreline, and (of the 150 or so named beaches found in the Algarve) we’ve come up with a list of a few of the best. 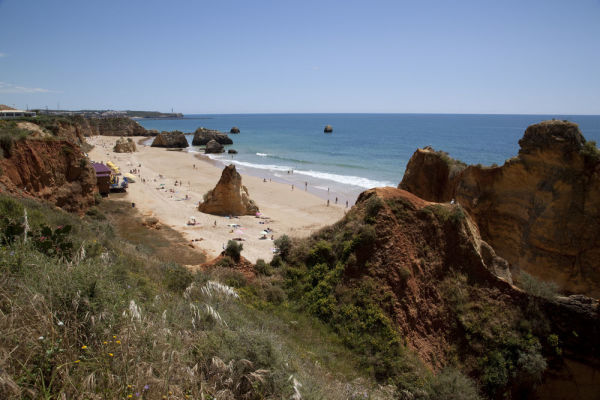 This beach is part of a small but vibrant seaside resort, where the paved avenue leads directly down to the beach. Along the way there’s plenty to see in terms of shopping and dining, as well as a bit of history in the form of the fortress that once stood to defend against the invading Moors.

Down on the beach you’ll find beautifully coloured rock pools that are worth a glance for all the sea life that can be found in them, such as limpets, snails and anemones (keep an eye out for fossils). The cliffs surrounding the beach draw the eye east towards the volcanic Rocha Negra (Black Rock) that stands proud along the coast. 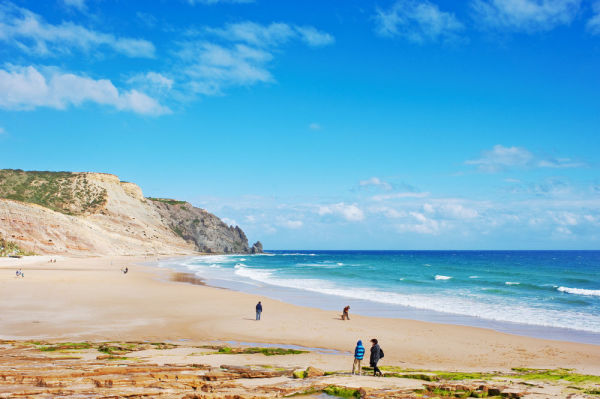 The name of this beach literally translates to mean “half beach”, as it shares the terrain with another beach called Alvor (which is definitely worth a visit as well). Easily accessible from the town of Lagos, Meia Prais is popular with tourists, locals, families, surfers and walkers, due in part to the beautiful views it offers across the bay.

This 4km curve of sand is spacious and clean, and is backed by sand dunes and villas, as well as a number of restaurants that are close by. 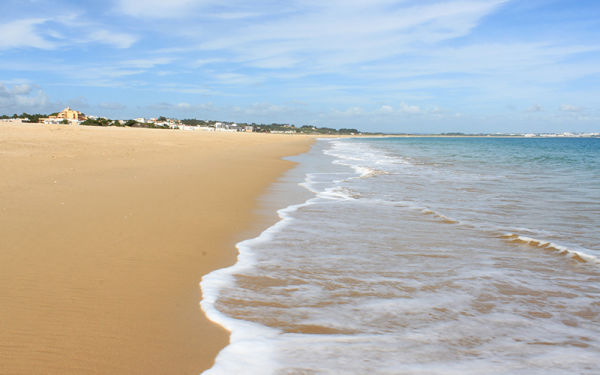 Praia do Martinhal, Vila do Bispo

This Blue Flag sandy beach is found in the Bay of Baleeira near Sagres, and is sheltered by Ponta Da Atalaia in the west. If you stay close to the cliffs you’ll be sheltered from the fairly persistent wind that blows down the wide valley from inland. Despite the frequently blowy conditions, the water remains clam at Praia do Martinhal, and there are boat trips available to take you out to see the spectacular limestone islets off the beach, as well as picturesque secluded cliff grottos and bays. There are also the ruins of a Roman pottery centre to the east that are definitely worth a visit.

Away from the beach there are a number of facilities, such as restaurants and bars (try the Sangres oysters at Nortada), so you can comfortably spend an entire day here. 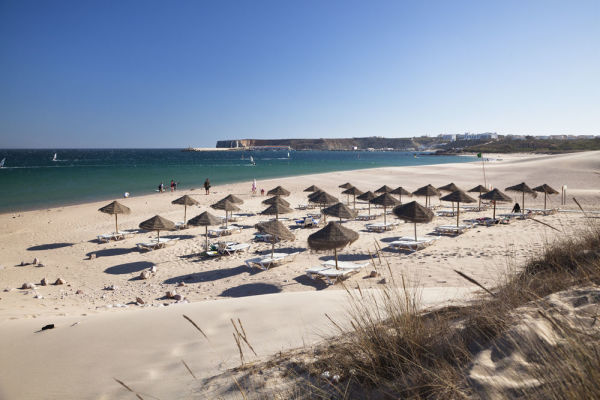 This lovely beach is named after the fascinating red cliffs that form the backdrop to this beautiful stretch of golden sand. Seeing as the cliffs aren’t that tall, it makes for a relaxing walk up and down the beach. The beach is accessible from Galé Leste where there are a few restaurants and bars.

Bear in mind that Praia da Falésia and is one of the world’s best places for an unforgettable sunset, when the orangey-red colours of the cliffs perfectly merge with the sky. 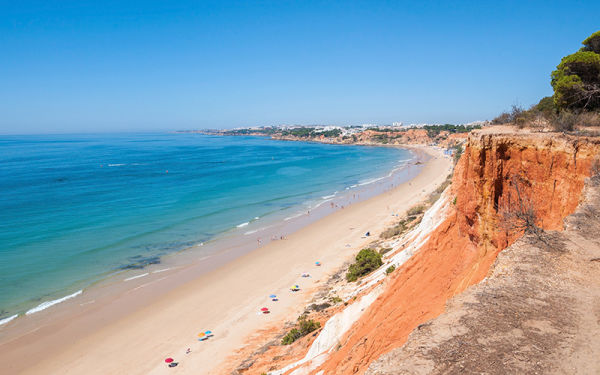 Amazingly, this perfect little gem of a beach is relatively unknown and -because it’s off the tourist radar - you won’t find any water sports, umbrellas or sunbeds, and you certainly won’t be fighting your way through the crowds.

This tiny beach is comprised of pockets of white sand surrounded by ochre rocks, and is perfect for soaking up the sun with a good book, or simply lazing in the shadows of the cliffs behind.

There is a perfect little rustic wooden bar above in which to enjoy a cold beer, and just a short walk away is the Suites Alba resort with its elegant cuisine. 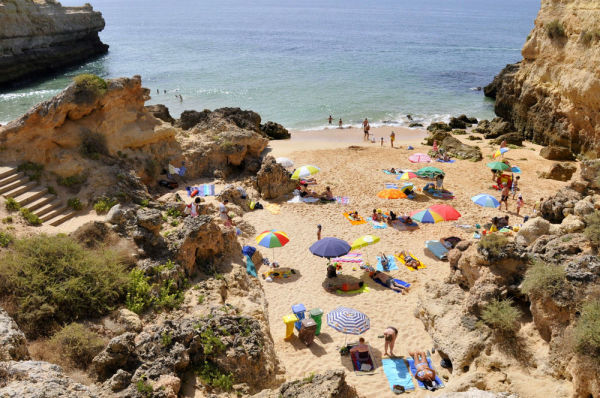 Roughly 4km west of Albufeira you’ll find the small beach resort called Praia da Gale, and on the way there you’ll see some stunning scenery, such as olive plantations, vineyards, fields of green and orange groves. The beach itself is popular amongst tourists and locals and comprises of two main beaches that are divided by rock formations.

The Blue Flag beach is perfect for swimming and there are lots of facilities and restaurants nearby. If you’ve hired a car and feel like having a little adventure, then it’s well worth visiting the Zoomarine Park which is about a 15 minute drive away, or the Salgados Nature Reserve which is another 5 kilometres away.

Tavira Island is considered by some to be the absolute jewel in the crown of the eastern side of the Algarve. Known locally as Praia Das Cascas, the island with its vast stretches of beach is beautiful and bustling with plenty to see and do. Accessible only by boat, the Blue Flag beaches and wildlife reserves make for a great day out when visiting the area. 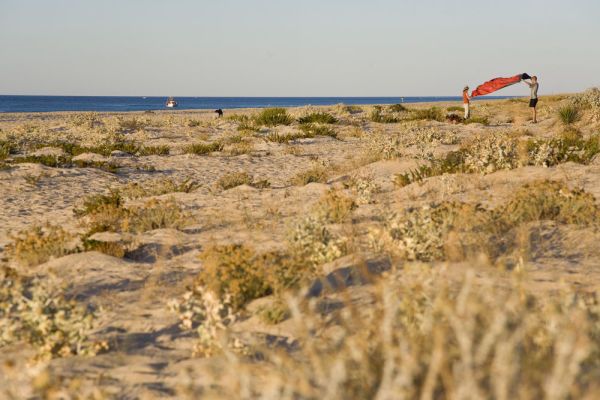 Praia do Barril (which translates as ‘The Barrel Beach’ in English) is one of the most emblematic beaches of Tavira, and is really just an extension of IIha de Tavira. Plenty of sandy bars line the route there and the shops nearby have everything you’d want for a day on the beach.

You can even have a bit of fun getting there by catching a ride on the miniature railway from Pedras del Rei and taking in the sights along the way. When you’re on the train, keep an eye out for the “Bocas” (local crabs) that hurriedly scurry into holes in the mud as you pass by. 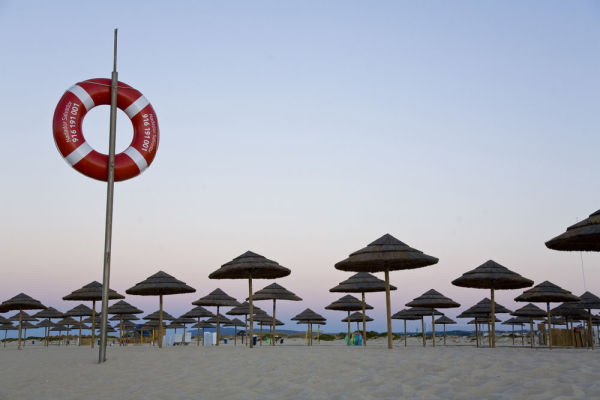 The three islands of Farol, Armona and Culatra form a barrier that protects the coast, and on the inland side of these islands you’ll find a number of lagoons that form the nature reserve called Ria Formosa. Praia da Armona is a beach found on the island of Armona and is accessible via the ferry that leaves from Olhão every 15 minutes or so during the peak tourist season. The ferry ride takes about 30 minutes, but the limited access means that the beach won’t be completely rammed with tourists. Just a short walk in either direction will lead to nice secluded spots for that extra dose of tranquillity. 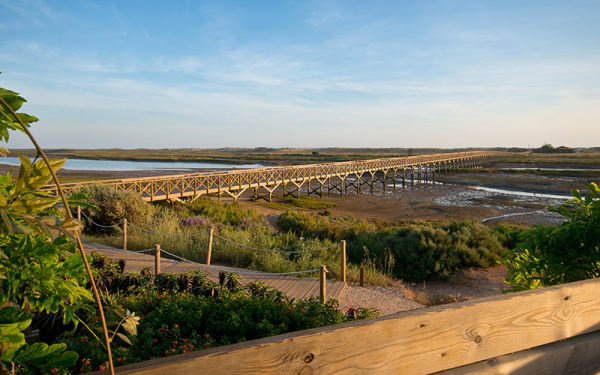 Of course, the beaches featured above are just a few of our favourites that can be found in the Algarve. There are plenty more out there for you to discover, so make sure you leave time in your holiday for a little exploring, and you’re bound to find your very own favourite beach.