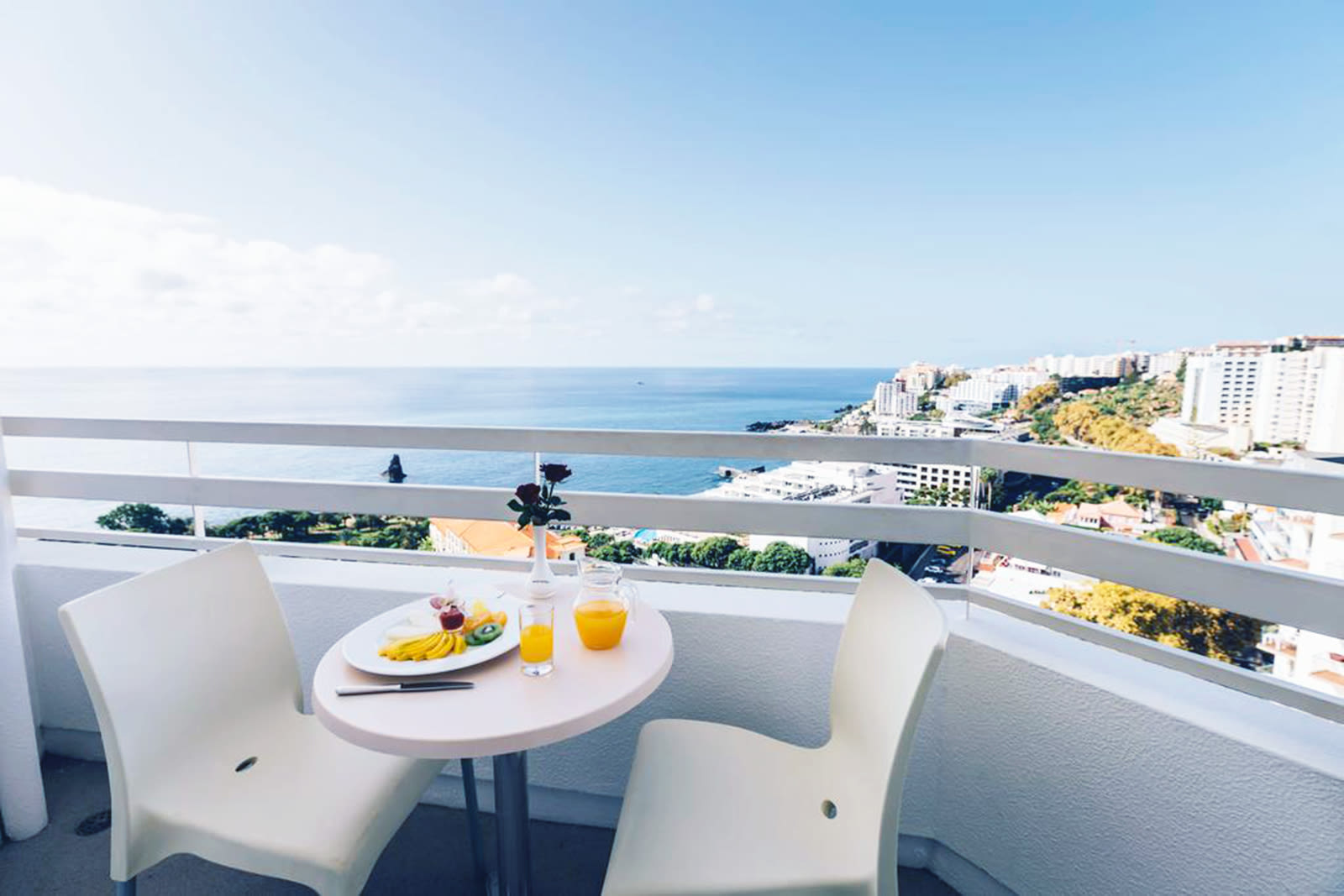 Situated just 15 minutes from Funchal, the Muthu Raga Madeira Hotel is located perfectly for a tranquil and relaxing getaway to Madeira. Based within the Lido area, the Muthu Raga Madeira has easy access to the swimming pools as well as the sea and close to the local shopping area. Due to its high viewpoint, the hotel's main attraction is the outstanding views of the sea and surrounding area it offers to guests who are staying there.

The Muthu Raga Madeira Hotel is newly refurbished and offers a great range of facilities for guests to enjoy. The outdoor swimming pool is heated for winter breaks and overlooks the sea and surrounding areas. While those looking for a workout can take advantage of the hotel's Spa & Beautiy treatment centre.

One of the Muthu Raga Madeira's best attributes is its rooms. The contemporary styled rooms all have a furnished balcony with a table and two chairs, perfect for enjoying a relaxing drink in the evening. Land View rooms give an eyeshot of the hill behind the hotel while sea view rooms, which showcase the Atlantic Ocean and Lido promenade, are available at a supplement. All rooms are equipped with a flat-screen TV, telephone, air-conditioning, mini-bar, safe and en suite bathroom.

Situated just 15 minutes from Funchal, the newly refurbished Muthu Raga Madeira Hotel is located on the hillside in the Lido area, with easy access to the promenade, swimming pools and the sea. The hotel is close to a selection of shops, restaurants, cafés and bars. Due to its high viewpoint, the hotel offers outstanding views of the sea and surrounding area.

A lovely friendly hotel.Room cleaned daily by friendly staff.Nice poolside area.Breakfast provided...typical hotel breakfast. We ate out every evening as the hotel is in the lido area where there are plenty of good eating places.Would definitely stay again

It's not great. There are better hotels in Madeira that cost less. Now they are saying we can't eat or drink outside, closed the pool bar and stacked up the loungers...

They are saying this is the Madeira authorities but all around us there are people outside eating. Wasn't great before all this,

First time to Madeira and this hotel. It suited all of my family’s needs even my elderly parents with walking issues. Breakfast options were plentiful, something for everyone. Rooms well equipped, beds firm but that suited me and my wife. Showers were great, powerful and hot any time of the day. All staff we came in contact with were friendly and obliging in every way, Many restaurants on the door step do no need to travel to far. All in all great hotel and would definitely stay again 100%

This hotel is about 30 mins walk from the main centre of Funchal. Hotel clean and modern as was our room. Well stocked in bathroom with tv and fridge too...

Staff friendly and helpful and cleaners were excellent. Nice area with plenty of shops, bars and restaurants to choose from and not far from beach area. Would stay here again 😊

Reasonable hotel, but rather loud indoors

We were rather pleased with the hotel overall, not where near the best, but decent enough.

The room was spacious and have a nice little balcony. The room also had a lockable fridge, which was empty (not filled with items to buy) so you could keep your own drinks etc there.

Some negative feedback: A little desing flaws, in the bathroom the drain is too high, meaning if water splashed from the bath on the floor, but water would not properly run down the drain, leaving the floor wet...

The room didnt have enough places where to hang items, such as towels and clothes to dry.

The rooms can be rather nousy, which usually doesn't bother me, but our neighbours (or cleaner) did not know how to use the keycard, and every morning I would wake up to that annoying biiping of the lock.

About the cleaning, towels were often changed even if not left on the floor, which were the instructions if a change is not needed. Rarely would anyone complain about a clean towel, rather just to point out the environmental effort the hotel should be making (as they advertise). I would also suggest having a "no need to make the bed / change the sheets" sign to leave on the bed.

Most staff were very pleasant and welcoming, but a negative feedback from our check in. The receptionist felt rather distant and barely spoke to us. She asked for our ID's and then wanted my booking number (or something as such) from my reservation site. I have never been asked this, so there I'm scrolling through hundreds of emails trying to an email with a booking / reference number. This whole time she clearly had my reservation open on her screen. Eventually after I found the number, she asked to look at it, and comments "oh, it's in your language". I was very suprised about this and it felt very weird and unprofessional.

Checkout was the opposite, very fast and friendly (different receptionist).