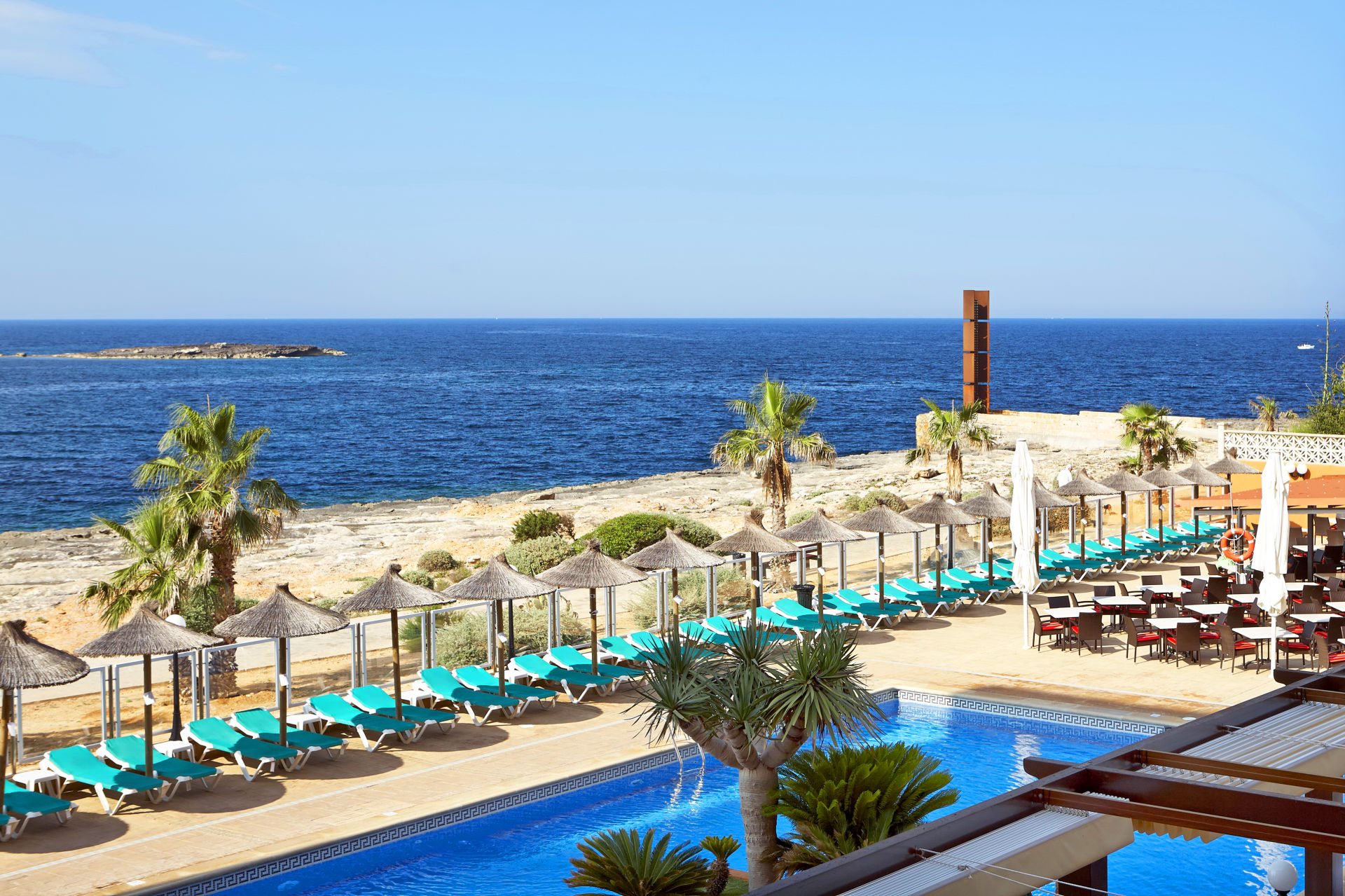 Situated on a small peninsular and just a four-minute walk from the sea, this superbly located hotel offers panoramic views of the Mediterranean, as well as easy access to arguably the most well-known and stunning beach on the entire island of Majorca, Es Trenc. Offering a beautiful crescent of white sand, backed by trees and falling gently into a calm, turquoise sea, Playa Es Trenc offers a picture-postcard beach that could easily be mistaken for the Caribbean.

The quaint resort of Colonia de Sant Jordi or Port de Campos as it is sometimes referred to is a short 15 minute drive away and provides a wide range of top-class restaurants, laid-back bars and elegant boutiques, as well as a smattering of tiny coves, beaches and harbours.

Lay back and relax in the sunshine:

This well-equipped hotel offers a fantastic array of facilities including an outdoor swimming pool with excellent views out to sea, a separate pool for children, a tennis court, basketball court and billiards room. Dining facilities include a buffet restaurant overlooking the Mediterranean, a fully stocked bar, and nightly entertainment.

Rooms at the Universal Romantica Hotel:

Bright and airy rooms feature flat-screen TVs, telephone, bathrooms, Wi-Fi (at a fee) and a furnished balcony or terrace with excellent views of the sea or surrounding countryside.

Situated on a small peninsular and just a four-minute walk from the sea, this superbly located hotel offers panoramic views of the Mediterranean, as well as easy access to arguably the most well-known and stunning beach on the entire island of Majorca, Es Trenc. Offering a beautiful crescent of white sand, backed by trees and falling gently into a calm, turquoise sea, Playa Es Trenc offers a picture-postcard beach that could easily be mistaken for the Caribbean.

The quaint resort of Colonia de Sant Jordi or Port de Campos as it is sometimes referred to is a short 15 minute drive away and provides a wide range of top-class restaurants, laid-back bars and elegant boutiques, as well as a smattering of tiny coves, beaches and harbours.

Everything was great. Hotel staff was very kind and helpful. We have spend there really nice 7 days...

Each day (except Sunday) there was program during day and also on evening.

We have had halfboard. Breakfast and dinners were great. You can find there a lot of choices (different meat, different salads, gluten free food, international and also local food). Each dinner it was possible to choose fruits, cakes, ice cream.

In hotel there is pool for kids and also for adults but it was not needed because there is also very nice sea. The hotel has entrance to sea very close.

We certainly recommend hotel and we would like to come back.

Not Bad - Could Be Better

The context - we were here for 5 nights as part of a Saga Balearic Islands Adventure holiday visiting all three main islands. Our other hotels were locally rated 4, whereas this is only 3. Our arrival as a group of about 25 was a bit haphazard with the hotel staff allocating rooms, wavering about whether they need passport details (they already had these), and organising which dinner sitting we preferred and allocating table numbers which we were required to sit at for dinner only - sit anywhere for breakfast/lunch.

The staff are very good, although not many speak English very well, but I’d suggest that there are just not enough workers for the size of hotel as it was very busy in October...

Our room, which faced the sea, was very large (two balconies) was well serviced but like the whole of the hotel could do with both some TLC and refurbishment. Others complained about the air conditioning not working properly in the bedrooms but in ours it worked almost too well!

Food was generally OK but if not a meat eater then it left something to be desired. And curiously the fish on offer was rather limited. I’m not a fan of multiple dinner sittings. We opted for the first sitting - table 71 if you must know - and if you came halfway through the sitting often the food choices were limited as the hotel was clearly holding back on refilling the buffet displays until readying for the second sitting. Also it would seem that it is a hotel that has a lot of German custom as the dishes were often targeting German tastes.

Even in October there were plenty of children in the hotel, and during our stay two largish groups of teenagers spent 1-2 nights there. Saga holidays are for the 55+ age group and I didn’t really understand why they were using this hotel unless it was to manage the package cost down to a level for greater take up.

Luckily the hotel had a swimming platform right outside for guests to swim in the sea - my wife took full advantage of this as young children jumping into the hotel’s pool and splashing about inhibits serious swimming.

A moment of comedy took place when the hotel had a fire evacuation exercise. The fire alarms went off - guests take no notice. Staff come around saying “fire simulation” - guests take no notice. Staff leave the premises - guests now start asking themselves is this a real fire? Guests leave the premises and stand in the road - no organised evacuation areas. After 10 minutes the alarms stop and guests start asking one another, “what now?” No clear direction so guests drift back to where they were before. Who knows what might have happened if there had been a real fire? (Declaration - my wife is the daughter of a former senior fire officer and we take fire safety in public buildings very seriously.)

The location of the hotel is good. There is a good promenade that takes you around to the marina/port. I suspect that not many guest venture that far but just beyond the marina is a good beach.

Would we come here again? Probably not as it is definitely a family hotel rather than one which caters primarily for adults only. But the area is pleasant. If your package includes excursions then you can see something of the island. Otherwise best to rent a car.

Really enjoyed our stay at this hotel. All-inclusive stay with delicious food. There was a lot of seafood which I love...

Bottles of wine with dinner were nice and my favourite was the red. BBC and ITV television were nice to watch in the evening

Stayed at this hotel for two weeks in September on an all inclusive deal. The hotel was very clean, all the staff were wonderful and the food was very good. The hotel is in a quiet location and the in house entertainment finished at around 10.30pm which suited us...

However, our holiday was spoilt to some extent by inconsiderate and selfish smokers, including one of the hotel managers who was smoking at a staff meeting being held at the pool bar. One evening, my wife and I were trying to enjoy a pre dinner drink while enjoying the view and the sunset. We had to move table six times to avoid the smoke from people arriving and lighting up next to us. The sun beds with umbrellas are very close together and you can't move if you have paid to reserve one and have to inhale second hand smoke from someone about 1 metre away. Smoking is also allowed on the balconies, so you can't escape from it there if someone close by is smoking.

I would suggest that the hotel management address this issue by segregating the pool bar into smoking and non smoking areas. Similarly, with the sun umbrellas, half could be smoking and half non smoking. Of course management could decide to make it a non smoking hotel to help people give up. Working in a non smoking environment helped me to give up many years ago!!

Nice hotel, clean and staff particularly friendly and helpful. Food good, nice selection and most diets catered for. Location ok but thanks to little tourist train shops etc were accessible to disabled but sadly no access to beach or sea for people with disabilities...

But all in all very pleasant stay and good facilities.