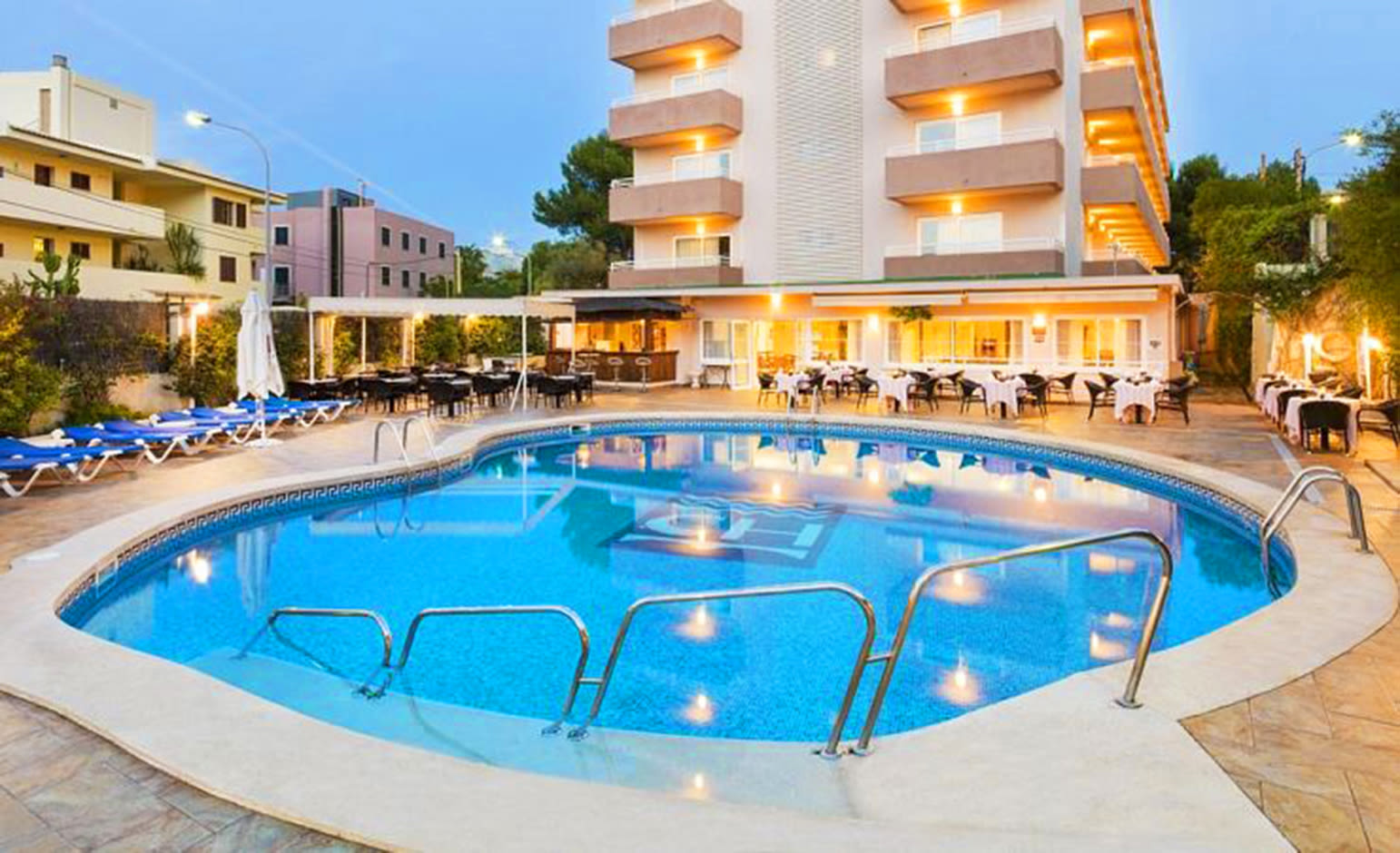 Delfin Mar is a 4* property located just 500 feet from Santa Ponsa beach for you to enjoy the clear waters of Cala de Santa Ponsa and is only 150 yards from the centre of Santa Ponsa.

Relax by Delfin Mar's outdoor swimming pool with separate children's pool. From November to April, guests can enjoy the indoor pool. Dining is taken at the buffet restaurant which has a weekly gala dinner.

Guest rooms are furnished with a balcony, private bathroom as well as satellite TV. Upgraded rooms are available at a supplement.

Delfin Mar is a 4* property located just 500 feet from Santa Ponsa beach for you to enjoy the clear waters of Cala de Santa Ponsa and is only 150 yards from the centre of Santa Ponsa.

Original holiday booked with Thomas cook to celebrate my birthday with friends. With no research done booked the sky senses. Couldn't be happier...

Even though prices shot up we got more for our money. Not the view we wanted but much nicer hotel and the roof pool had even more amazing views! The hotel is immaculately clean, staff friendly and helpful. Only downside is food (tho tasty and varied is not as hot as it could be). A short walk in either direction takes you to the centre , bus stop , beach . Etc. Highly recommended.
I

Only small moan was hot food was sometimes only warm. But great holiday. Tip Take a boat trip, or bus into Palma which is easily accessible.

Stayed may 2019 just after opening , refurbishment and again in July after our earlier visit we decided to return due to our first experience being excellent in all areas .The hotel is 5 mins walk from the beach on a small bank with plenty of restaurants and bars easy access with 5/10 minutes all around but no noise disruptions.we wer b&b then half board on second vist due to food being very good on our first visit breakfast excellent items cooked to order with continental options and buffet style . evening meal was excellent grill bar cooked to order with traditional dishes and very good salad bar fruit and sweets selection.excellent restaurant staff couldn’t do enough to help you over your visit.our room over looked the bay and sea had all the needs of a hotel room 4star very clean and didn’t experience any noise .both pool areas well maintained clean and good beds roof top pool was excellent with great views .we met the director and Rosa who I found excellent hosts and could not do enough in making our stay fantastic backed up a great team reception,house keeping,restaurant,pool side and have booked for return this year . The only one thing the hotel could do with is some night time entertainment Visiting Maybe a couple of nights a week .Thanks Andrew

This hotel was chosen last minute with a rush after Thomas Cook collapse and it surpassed all expectations, not just the location but the room, food and service. It said it had had an update and that was obviousl. I stayed a week with my daughter and being the end of October the hotel was wonderfully quiet and at times we had the entire roof pool area to ourselves.

At breakfast your chef cross contaminates meat and veg. My group could not eat the meat at the hotel due to religious reasons. Upon asking for a fresh omellete to be made using cheese and veg only, the same utensils were used to make a ham omelette...

We could not eat the ordered omelette. On the same cooking pan, pancakes are fried as well. On the pan beside it, the chef cooks bacon and uses the same utensils to flip the food being prepared on the other side for fried eggs, pancakes and omelettes. This is not 4 Star service. Utensils for meat and veg should be separate as well as cooking stations to stop cross contamination.

In room 515 the patio door to the balcony is very stiff. It takes considerable force to open it.

In comparison of the two rooms 515 has a smaller balcony and TV. Room 511 has a bigger TV and larger balcony. Price paid for both was same but I beleive 515 should be less.

TV's in the rooms were not working either. Upon advising reception this was resolved. However. if you are a 4 star hotel this should not occur.

The beds in both rooms creak when you move. The mattress springs can also be felt. I kept getting woken up by the constant creaking when moving on the beds. I advised the reception who sent someone to fix it. The feet on the bases of the beds were tightened but the creaking of the mattresses did not stop. I request you to go and sleep in these rooms to experience this so that you may understand how customers feel.

Your steamroom was also not functioning properly. I made staff at reception aware of this. I had advised staff prior to use and the steamroom was put on for more than 1 hour. This was not fixed and no further information was given to me.

One of the lifts was also not working for two days. No more than 4 people can get into the lift. As we were 6 we had to wait until the lift came back. This was very inconvenient too.

The rooms are also not sound proofed. On the sky bar the sun loungers get moved around and the noise of them being moved wakes you up. I presume staff are cleaning the area in the morning. Considering what I paid and your claim to being 4 Star I think is wide of the mark. There is no way you can claim to being 4 star. I feel you are reactive to fixing problems. However, you should be pro-actively fixing things to ensure problems do not occur. I could have booked a 5 star and all inclusive for the amount I paid on the island.

I did enjoy my time in Santa Ponsa but felt let down by the overall service provided and feel I was charged extra when this should not have occurred.