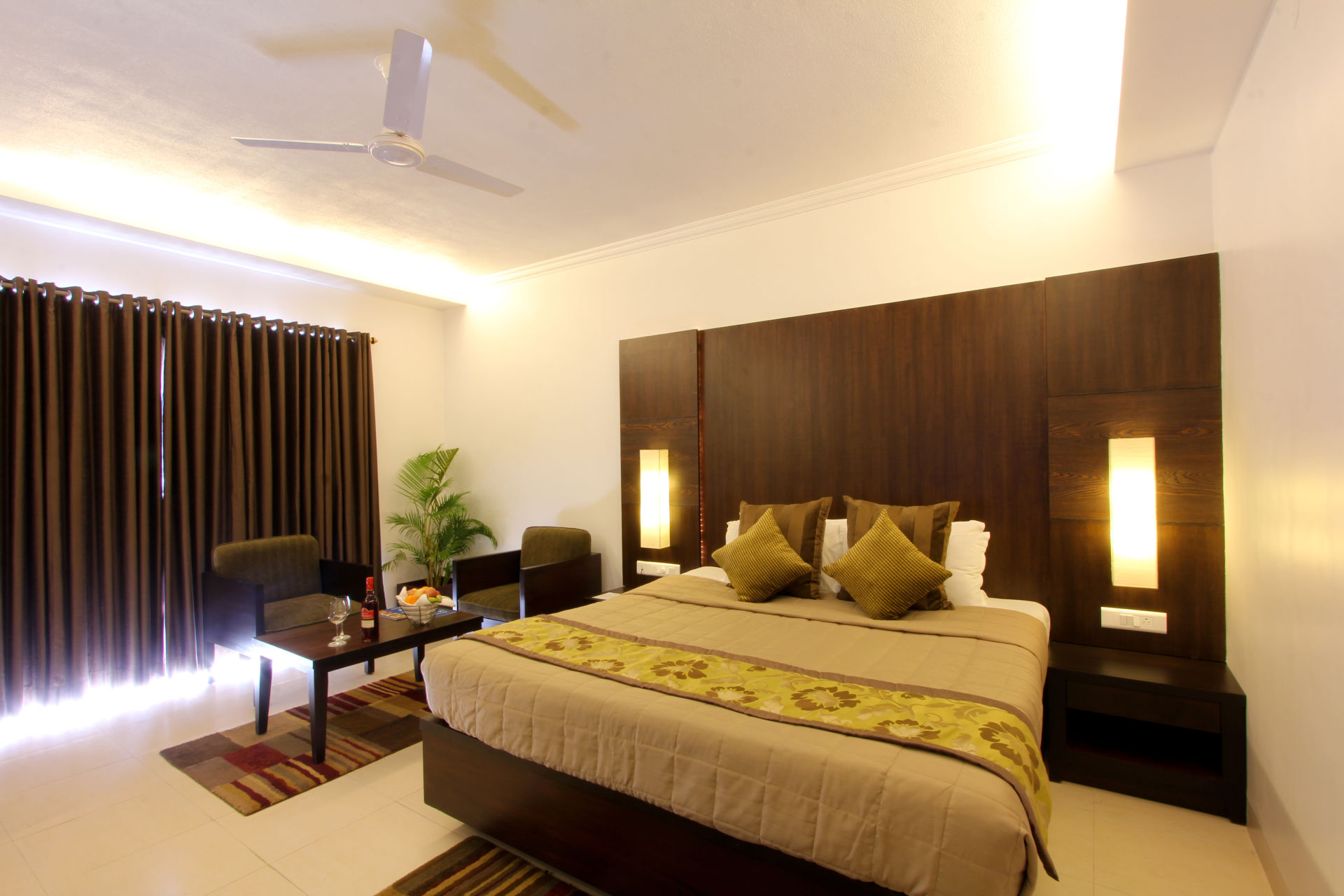 Hidden away beside one of Goa's most serene beaches, this four-star beach resort offers guests true Goan hospitality. Known for its cleanliness and beautiful sunsets Sernabatim's main appeal lies in its tranquillity. Quieter than most Goan beaches with just a small selection of sleepy restaurants and bars, guests can simply relax without distraction and enjoy the peaceful sound of the waves and ocean breeze.

Immerse yourself in luxury on this exquisite holiday to Goa:

Elegantly appointed, air-conditioned rooms offer wondrous comfort and the ultimate place to unwind after a day at the beach. All deluxe rooms come equipped with a large flatscreen TV, telephone, separate seating area, mini-fridge, modern bathroom and a balcony or terrace.

The Baywatch Resort offers a selection of bars and restaurants to cater for every taste, mood and whim. Pam's Multi-cuisine Restaurant offers an eclectic mix of Oriental, Continental, Indian and Goan delicacies, all of flawless quality.

Harry's Lounge Bar is a more relaxed affair, positioned at the most accessible spot in the resort it offers a well-stocked bar for the thirsty traveller, as well as in-house entertainment and a big screen. Pam's Coffee Shop offers a poolside setting, great coffee and delectable food, as well as some great evening entertainment.

A fully equipped gym is available for those looking to up their fitness levels, as well as steam, sauna facilities for those simply looking to relax. unwind with a variety of treatments at the lifestyle spa. Enabling you to fully rejuvenate body, mind and soul. The hotel also offers a swimming pool, games room and a variety of evening entertainment.

Hidden away beside one of Goa's most serene beaches, this four-star beach resort offers guests true Goan hospitality and is within walking distance of the stunning golden sands of Sernabatim Beach. With a selection of restaurants; large 2 pools and a spa providing a number of treatments, Baywatch Resort makes the perfect choice for that relaxing break.

We stayed at this hotel on a B&B basis using it as a base for nearby Sernabatim beach and for exploring the local area. We lunched and dined at various shacks around the area.

The hotel's accomodation is spread around a few, two storey blocks.

There are a couple of swimming pools, one main restaurant, a coffee area and a small bar.

The hotel staff were all friendly and courteous. Security was around 24x7.

You can change money at the hotel reception but they offered a poor rate (5INR/£ less than elsewhere)...

WiFi is available but you have to pay for it. Fortunately you can get free WiFi with some of the beach shacks. Anthy's in particular offered a fast connection.

Our initial room was too close to the bar and pool area with the evening music and accompanying singing and shouting being far too loud for us and sometimes continuing beyond the notional cut off time. We eventually moved to a different room set back a bit from the bar and pool area which was a lot more quiet.

The deluxe room we had was spacious and comfortable with a larger than queen sized bed, coffee table, TV which can be pick up BBC World News, and lots of storage albeit only a handful of clothes hangers in the wardrobe. The wardrobe also houses the safe which is of a useful size.

The separate bathroom had the toilet, sink, a large walk in shower with an electric geyser providing the very hot water, a hairdryer and shaving point. The hotel replenished the soap and very small bottles of shampoo/shower gel - so you might want to take some of your own. There was the occasional whiff of drains but then again how long do you spend in the bathroom.

Finally we had a small fenced off terrace area just big enough for a table and two charis. In our original room, 111, this terrace was right in front of the pool shower!

The aircon unit was noisy but effective. There was also a ceiling fan which on slow speeds was fairly quiet so we used that when sleeping, turning off the noisy aircon.

The room was cleaned and tidied daily with new towels and/or bedlinen as required.

The Hotel is situated some 300m from Sernabatim beach which is easily accesible by turning right onto the road running outside the hotel. The hotel is the only large hotel in the area which is quite secluded. You will need to have good walking legs or take tuk tuks or taxis if you want to explore. There is a taxi rank just outside of the hotel but they operate a cartel and charge accordingly, fortunately there are a couple of tuk tuks stationed at Sernabatim beach which are a lot cheaper (300INR to get to Margao for instance).

Sernabatim beach is very sedate with only a handful of shacks and not much else going on. There is a power boat stationed there for water sports but in the two weeks in March we were there it was only used once for an hour or so for banana boating.

From the beach you can turn left and head south to lively Benaulim which is about a 15 minute walk. Alternatively turn right and head north to the even more lively Colva, 20 minutes walk away.

We only had breakfast in the main restaurant and the Indian food there was very tasty in my opinion. The buffet breakfast comprised usually of: boiled eggs, sausages/bacon, cereal, fruit juice, flavoured milk, tea, instant coffee, cereals, oats, cooked to order eggs. There was also a large variety of Indian dishes which changed on a daily basis: sambhars, breads, pakoras, pulses and vegetable curries.

This hotel strongly caters for the Conferences and Weddings markets; in our two weeks there there were only a few days without any events. During breaks, the conference delegates, mainly men, would mill en masse around the hotel especially the pool area destroying any ambience. Needless to say the restaurant was occasionally swamped.

In particular there was a Renault conference which lasted some 3 days and they had setup their own large stage in the pool area. During the evenings there were amplified presentations and even a disco with searchlights which continued until late. This conference also coincided with one of the hotel's special dining nights wherein they laid tables and chairs outside and shut the main restaurant. So on this gala occasion instead of a three piece Indian band serenely entertaining diners playing ethnic instruments, the diners were instead bombarded by corporate presentations at high volume with flashing lights.

Fortunately as we were not All Inclusive we avoided this by being away from the hotel most of the time.

We can't recommend this hotel for first timers. If you have been to Goa before and know the ropes then yes do use it as a base for exploring Sernabatim beach and the local area. The nearby town of Margao is well worth visting especially for its markets.

From what we saw, we can't recommend the AI option here either as the facilities are few and small and there is little ambience or things to do.

Finally the hotel's focus on the Conferences and Weddings markets means it has a more commercial feel to it rather than a holiday resort feel. Because of this we won't be returning.

It was an great experience with Baywatch Resort Goa. It is located very near to beach (2-3 mints walk). Spacious rooms with modern amenities...

Staff members are very nice and helpful even the guards are very good (always greeting you with smile). Special thanks to Mr. Ranjan (Airport Representative) he is a very nice man. We had breakfast & dinner both all day, chefs makes delicious food with variety of cuisines. Live music performed every night at resort. Must recommended resort to all.

we were a group of 38 persons staying. The hotel had not catered for this onslaught , They seemed to be un prepared . The rooms were not prepared properly as per the norms, lacked cleanliness and some basic amenities, like hand towels/ water/ maintenance of AC...

The staff was polite but not responsive to the guests.The services did improve once complaints poured in. The hotel refused to compensate for cancellations due to corona virus threat. The original group size was 58. Corona Virus was a unfortunate incident , the hotel could have compensated those guests who could not come and had to forgo their full booking amount. Not done and expected. World over the bookings are refunded. Sad state of affairs

Mick & Bina for his 50th birthday

Had another amazing holiday in Goa. All down to the staff- from Anthony in the restaurant, Sachin in the bar, to the pool guys. Everyone worked tirelessly to ensure their customers have a lovely stay...

A lovely welcome back in the room. Food was excellent everyday with a special a la carte for Micks birthday with a birthday cake. Went back this year mainly for the great hospitality- & the sun!