Amber was the capital of the Kachchawahs from 1037 to 1728, when Sawai Jai Singh II moved the capital from the Amber Fort to the valley below and built Jaipur. The Fort as seen today was constructed from 1592 and extended by successive rulers. It was declared a UNESCO World Heritage Site in 2013 as part of a group of six hill forts in Rajasthan. Technically more a palace than a fort, its architecture is a seamless fusion of Hindu and Islamic. 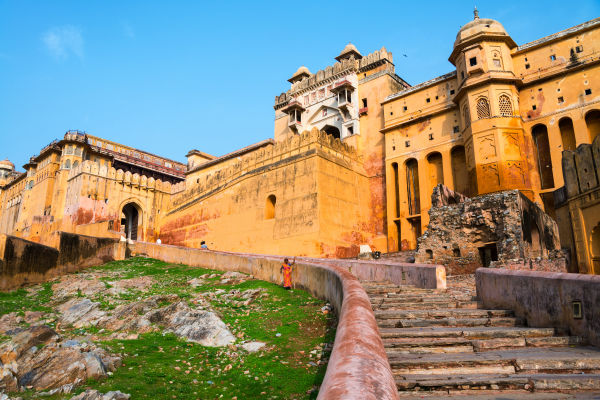 What to expect on your visit to Amber Fort

You will enter through Suraj Pol (Sun Gate), beyond which lies a beautiful and spotless complex of palaces, halls, pavilions, gardens and temples. The main courtyard, called Jaleb Chowk, is where returning armies would display their booty to the populace. To the right and easy to miss are some small steps leading to the Shila Devi Temple, worth the visit for its gorgeous silver doors with ornate raised relief work.

Heading back, the main stairway for Jaleb Chowk will take you up to the second courtyard and the Diwan-i-Am (hall of Public Audience) with 27 colonnades, each topped by a capital in the shape of an elephant, and latticed galleries above.

Another gate, the intricately decorated Ganesh Pol (Elephant Gate) leads to a third courtyard, around which are located the private apartments of the Maharajah’s family. This is the most exquisite part of the fort, known as Diwan-e-Khas (Hall of Private Audiences) but also referred to as Sheesh Mahal (Mirror Palace)) because of its walls covered in intricate mirror work, with glass imported from Belgium. It was built by one of the Maharajahs for his Queen. Apparently she loved to sleep under the stars, but as sleeping in the open air was considered inappropriate for such a lady, he built her this chamber so that burning candles would reflect in the mirrors and resemble the stars. Guides will point out the “magic flower” carved in marble at the base of one of the pillars around the mirror palace – recognisable by the two butterflies hovering around it. The flower contains seven unique designs – a fishtail, a lotus, a hooded cobra, an elephant trunk, a lion’s tail, a cob of corn, and a scorpion. The upper part of Diwan-e-Khas, known as Jas Mandir, has intricate floral glass inlays and alabaster relief work. The building on the opposite side of the courtyard garden is the Sukh Niwas (Hall of Pleasure), with an ivory-inlaid sandalwood door and channels that carried cooling water through the room – an early form of air conditioning.

Surrounding the fourth courtyard are the secluded women’s quarters known as the Zenena. It’s one of the oldest parts of the fort, completed in 1599, possibly because its raison d’etre made it an absolute priority for the king. For this is where he kept his many wives and concubines for him to visit as and when he so desired! The chambers are independent but opening onto a common corridor, so designed that the maharajah could embark on his nocturnal forays without the others knowing.