The exquisite Golden Temple, the most sacred place in Sikhism, attracts pilgrims as well as tourists from all over the world. As the central place of worship for all Sikhs, it provides a welcome and shelter for people of all faiths and castes, in keeping with Sikh culture. This genuinely shines through in the atmosphere and friendliness of the place, with none of the hassle and hard-sell you sometimes encounter in other Indian temples. Sikhs are very proud of their religion, culture, history and, understandably, this temple – known to Sikhs as Harmandir Singh.

The meaning behind 'Amritsar'

Amritsar means “pool of the nectar of immortality”, the original name of the pool that surrounds to Golden Temple and which then became the name of the city that grew up around it. The pool is fed by an underground spring said to have healing powers, which is why pilgrims come to bathe in it.

Seemingly floating at the end of a long causeway (the Guru’s Bridge), The Golden Temple itself is a spectacular, shimmering blend of Hindu and Islamic architectural styles. Its foundations were laid in 1588, since when it has had a chequered history of development, destruction and restoration. It was destroyed several times by raiding armies from Afghanistan and the Mughal Empire. Each time it was steadfastly rebuilt. It did not truly become ‘golden’ until 1830, when Maharaja Ranjit Singh, the leader of the 19th Century Sikh Empire, sponsored the gilding of the dome with 750kg of gold. 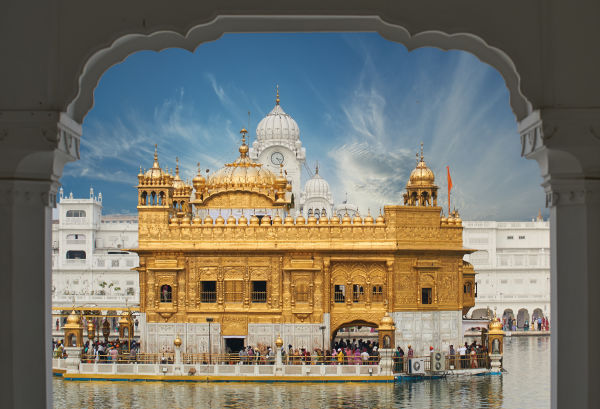 The sheer beauty of the gilded and decorated surfaces, rich with carvings and precious stones, is quite breathtaking. In the gleaming inner sanctum, priests and musicians maintain a continuous chant from the Sikh Holy Book (the Guru Granth Sahib) while a continuous stream of fervent yet solemn devotees pass through, immersing themselves in the moment. The Holy Book is brought to this place in the temple every morning in a daily ritual along the causeway from the Akal Takht, the seat of the Sikh parliament directly across from the main temple, to where it is ceremonially returned every night.

No-one ever needs to go hungry at the Golden Temple, thanks to one of its most extraordinary features – the Langar. This is a community kitchen, said to be the largest in the world, that provides free food to anyone who wants it – and that can mean anything between 30,000 and 100,000 people every day! Everybody who visits is welcome to the feast and the kitchens (there are two) and the dining halls (also two) are open all day. The food is prepared and cooked non-stop and no-one is ever turned away. Diners sit on the floor, there is no hierarchy and all are equal. Men, women and children sit together and can eat as much roti, rice, dal and vegetables as they want until they’ve had their fill. The kitchens produce around 25,000 rotis an hour and gigantic cauldrons of dal are constantly bubbling on top of burners. All the food is donated and the whole operation is run by volunteers.

After lunch, you can enjoy an afternoon to explore at your own pace or perhaps join an optional excursion to the India-Pakistan border to experience the fascinating flag-lowering ceremony, a daily ritual where each country’s soldiers compete to march, salute and shout better than the other!

A Passage Through India with Marari Beach Stay