Once upon a time, Ranthambore was a game reserve of the royal families of Jaipur and Karauli, where huge tiger hunts took place involving the entire royal court on some 40 elephants slaying prodigious amounts of big game. Through the 20th Century, India’s tiger population decreased from an estimated 40,000 to 1,800. So it was in 1972 that Ranthambore became a national park under the Project Tiger programme, launched in an effort to save the Bengal Tiger from complete extinction.

Today this famous national park is the best place to spot wild tigers in Rajasthan. Estimates vary but in 2016 their number was put at around 55. This may not sound a lot but the figure has been considerably lower due to intermittent outbreaks of poaching. So while a tiger sighting can never be guaranteed, the odds are probably better at Ranthambore than in any other Indian nature reserve. It is reckoned that up to 95% of all the photographs ever taken of a tiger in the wild have been taken in Ranthambore. So the very fact that they are famously indifferent to the presence of humans and their cameras, plus the park’s relatively small size, increases the chances of a sighting. It’s certainly far more probable than catching a glimpse of a leopard because they live on high inaccessible terrain and are extremely shy. 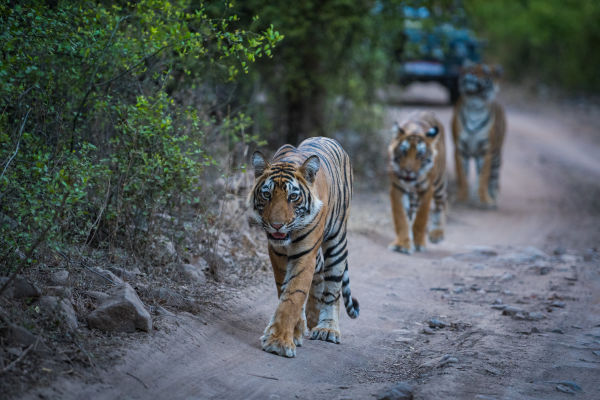 Our message to all our guests is this: we hope you’ll have the good fortune to spot a magnificent tiger, but even if you don’t, the park is also home to an amazing diversity of fauna. You may get to see caracal (wildcat), crocodile, nilgai (large antelope resembling cattle), chital (spotted deer), chinkara (a dainty gazelle) or sambar deer, whose distinctive barking call is often a sign of a tiger nearby. There are also wild boars, sloth bears and a rich diversity of birdlife, with over 400 residents and migrant species. Then, there is the sheer physical beauty of the park itself, from lotus-filled lakes and dense jungle to craggy, boulder-strewn cliffs and golden grasslands. Tiger or no tiger, you won’t be disappointed.

The success of the park has much to do with the tireless and courageous work of one man – Fateh Singh Rathore (1938 – 2011). He was made Field Director of Ranthambore in 1972, the year tiger hunting was banned in India. Almost single-handedly, Rathor mapped and built the park’s roads and persuaded 12 entire villages to move voluntarily – with financial incentives – into new villages with modern facilities. Under his protection, the tiger population increased dramatically, as did the world’s awareness of their plight. Yet there was still plenty of local hostility which culminated in a savage beating at the hands of a mob of villagers. His kneecaps were shattered and his skull fractured, but, on his release from hospital, Rathore simply returned to the village and challenged them to do it again.

Here’s another thing about this remarkable man. The first tiger he saw was one that was shot on a tiger hunt in Rajasthan Forest in 1961 that he helped to organise! And who shot the tiger? None other than the Duke of Edinburgh during a visit with the Queen that year. Rathore recalled: “I was not in love with the tiger at the time. We were very happy that we succeeded”.

How times have changed.

Beyond Indias Golden Triangle with Tigers of Ranthambore Extension