Rising in the Himalayas and flowing over 2,500km through India and Bangladesh before emptying into the Bay of Bengal, the mighty Ganges is the world’s third largest river after the Amazon and Congo.

But it is far more than a geographical statistic. The Ganges is the most sacred river to Hindus, who believe that it flowed from heaven to purify humans. It is also a lifeline to millions of Indians who depend on it for their daily needs. And its importance in every sense – spiritually, economically and politically – can be measured by the roll-call of former provincial or imperial capitals and holy cities that are located on its banks. Places such as Kannauj, Kampilya, Allahabad, Patna, Bhagalpur, Murshidabad, Baharampur, Kolkata and Dhaka… to name but a few.

Nowhere is the Ganges more sacred than in the holy city of Varanasi, in Uttar Pradesh, where your visit to the river will be based. The “City of Life” is one of the world’s oldest continually inhabited cities, and the quintessential Varanasi experience is a sunrise boat trip along the Ganges. 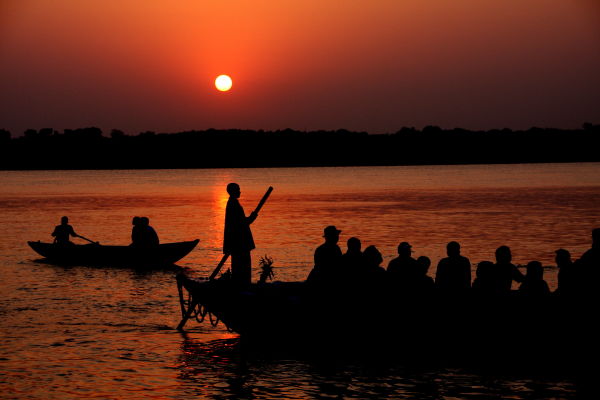 The great river banks are built high with 18th and 19th Century pavilions and palaces, temples and terraces.  As dawn bathes everywhere in a red glow there is an intensity both in the colours and the commotion at the riverside temples and ghats – stone steps leading down to the water - as locals arrive on the steps to offer prayers and flowers to the river. There are around a hundred ghats, big and small, visited by early-morning bathers, Brahmin priests offering puja, and others practicing meditation and yoga.

Hindus regard the Ganges as the elixir of life, bringing purity to the living and salvation to the dead. But the well-documented reality is that the river is badly polluted, in some places more than 100 times the Indian Government’s official limit. Pollution threatens not only humans but also fish species, amphibians and the endangered Ganges River Dolphin. Environmental initiatives to clean up the river, such as the Ganga Action Plan, have made little or no headway largely due to a combination of corruption and political inertia.

Responsible tour operators cannot be in denial about such regrettable realities, and of course we strongly advise our guests to resist any temptation to join the bathers in the river. However, from the pleasant vantage point of your cruise boat, the beauty and mystique of the Ganges remain undiminished.

Varanasi is one of three holy cities in India where the Ganga Aarti ceremony is performed every evening as dusk descends. It’s a very powerful and uplifting ritual, ending with a spellbinding display of candles and flowers afloat along the river. The Varanasi version of the ceremony takes place every sunset at holy Dasaswamedh Ghat, near Kashi Vishwanath Temple, the most sacred shrine in Varanasi. It really is a spectacularly choreographed must-see event.

And finally… 120 million reasons why the Ganges matters

Just to reinforce just how important the Ganges is to the spiritual beliefs of the Hindus, here is an astonishing fact. Every twelve years the 55-day Kumbh Mela takes place at a major Ganges confluence. The most recent edition was in 2013. It was attended by 120 million pilgrims.