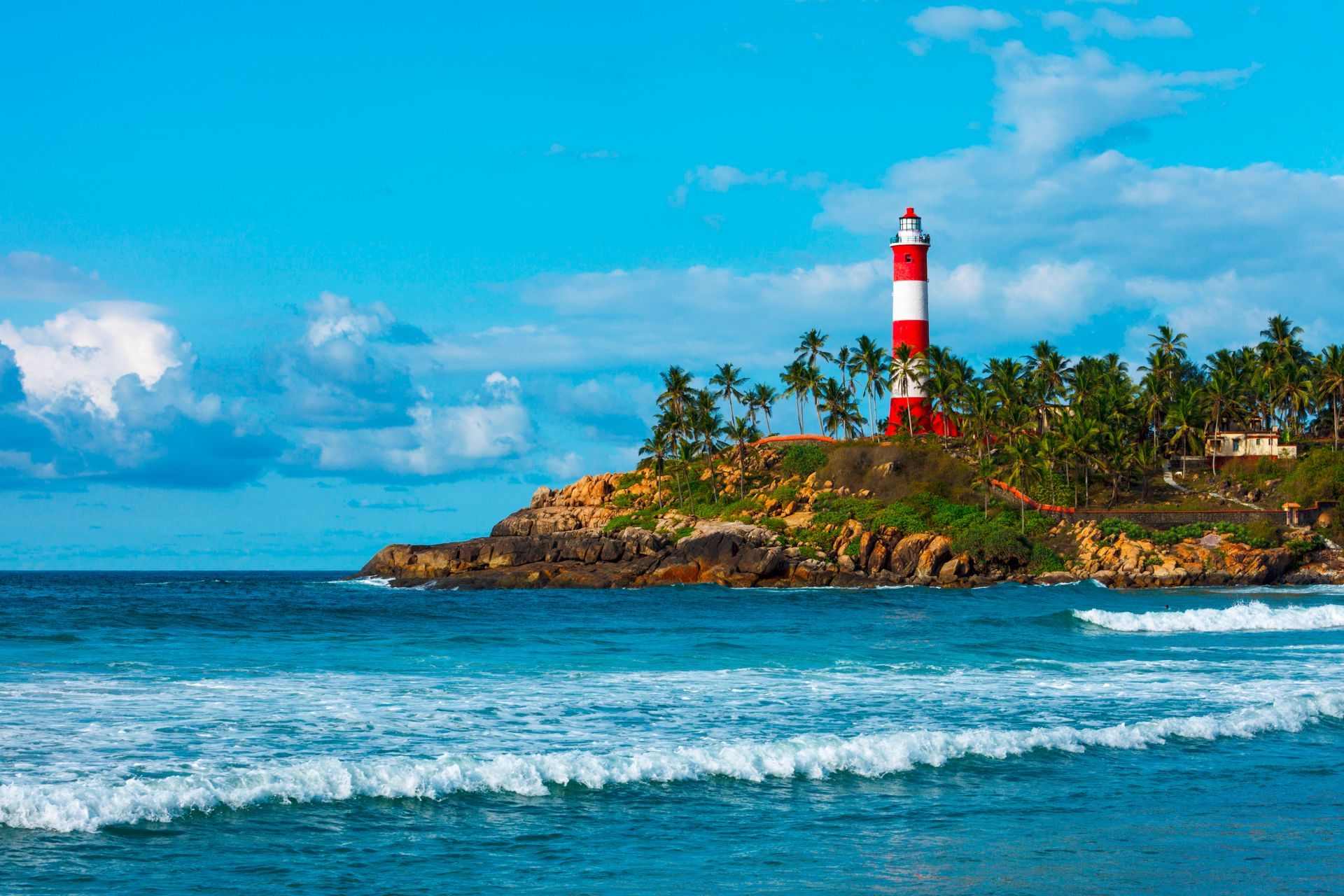 Hugging the south coast of Kerala, India, just before you fall off the edge of the country and into the Arabian Sea, is where you’ll find the beach town of Kovalam. Named after its endless rows of coconut trees, it is Kerala’s most developed resort, with a host of hotels and restaurants dotted along the main tourist stretch of Lighthouse Beach.

June and July, as well as October and November are wet monsoon seasons, so these are best avoided. Winter time – December to March – is more in keeping with its warm and tropical climate.

The main festival season, which is January to March, features events and parades, with a stand-out being the multi-day Elephant Festival in January.

The still-operational and traditionally striped Vizhinjam Lighthouse, stood at the southern end of - you guessed it - Lighthouse Beach, is certainly Kovalam’s most distinctive feature. Brave the winding, spiral staircase (or the cardio-challenged folks could always opt for the lift) for stunning panoramic views of the coast.

For a bit of extra sightseeing, the busy harbour offers insight into the daily toils of local fishing boats, plus a few distinguishing mosques can be viewed. There is also a modest display of sea life tank displays in the Vizhinjam Marine Research Aquarium.

Kovalam is famous for its beaches. What is known generally as Kovalam beach is actually separated into three parts: Lighthouse Beach, Samudra Beach and Hawah Beach. Hawa Beach is the busiest of the three, as it’s the first stretch of sand clocked by eager day-trippers. Samudra Beach, located north of Lighthouse Beach, is known for the 5-star Vivanta by Taj.

For a chance to watch your food being prepared by talented chefs over one shoulder, and the lapping of the waves against the shoreline over the other, Bait (located at Vivanta) and its high-quality seafood fare is hard to beat.

Part German Bakery, part restaurant, part bookshop(!) and popular with tourists, Waves Restaurant & German Bakery is one you should definitely check out. And since you’re in India, sampling the local delicacies is a must – head to Curry Leaf for views overlooking Samudra Beach to get a sunset to accompany the local cuisine.

You’ll be able to enjoy a refreshing beer or wine with your evening feast in most of the restaurants, but nightlife doesn’t stretch any further than this in Kovalam.

Kovalam hosts a castle, Halcyon Castle, which was built in 1932 by the consort of Maharani Sethu Lakshmi Bayi, M.R.Ry Sri Rama Varma Valiya Koil Thampuran as a family retreat. Today it has been turned into a luxury hotel.

For art lovers, a visit to the Kovalam Art gallery is recommended, where the works of various worldwide artists are showcased.

Just 16km away, the city of Thiruvananthapuram also has many interesting places to visit, including the Padmanabhaswamy Temple, the Sri Chitra Art Gallery and the Napier Museum.

Why not take a trip out into the ocean on a traditional Catamaran, which are rowed by local fishermen using bamboo paddles? You’ll be able to jump in and do a little snorkelling while you’re out there, too.

You can also take advantage of the decent waves by hiring a surfboard from one of the many outlets and surfing away your day.

Continuing the theme of appealing to adventurers, you could hire a bike and cruise around the highways, passing the lines of coconut palms as you go.

For more traditional means, the most convenient way to travel from place to place is via the tourist taxis.