With towering skyscrapers set amidst a treasure trove of colonial architecture, urban parks and lively Latino neighbourhoods, Santiago’s unique cityscape lies in the heart of a great bowl-shaped valley, proudly flanked by the majestic snow-capped peaks of the Andes - the world’s longest continental mountain range. However, its Chile’s versatile capital that really steals the limelight, the diversity that shines through the ever-changing neighbourhoods truly capture the uniqueness of this amazing destination. Paying homage to its colonial past, Santiago’s historic centre offers a glimpse into a bygone era, whilst effervescent cultural scenes and verdant grounds sit alongside commercial business districts, which continue to shape this ever-developing metropolis.

During the early months of 1541, Spanish conqueror Pedro de Valdivia arrived in the unclaimed valley of the Mapocho and founded the city of Santiago on behalf of King Carlos I of Spain. Named in honour of the biblical figure of St James, one of the twelve apostles, the city rapidly developed into a prospering city, despite continuous setbacks including the threat of earthquakes, floods and the native rebellion of 1541. Designed by the master builder Pedro de Gamboa, the initial grid layout of Santiago was devised, centring around the Plaza de Armas which continues to remain at the heart of historic Santiago. Whilst only a handful of colonial buildings remain intact, the city’s heritage is proudly showcased through the neo-classical architecture which adorns its majestic main square.

What is Santiago known for?

It is impossible to visit Santiago and not be enamoured with its stunning architectural wonders, from the grandiose Metropolitan Cathedral and Central Post Office Building to the Palacio de la Moneda, the city boasts an abundance of grandeur. Interwoven with a fascinating heritage, a number of excellent museums are peppered across the city, commemorating the evolutionary culture of this now bustling metropolis. Amongst one of the most poignant museums in Santiago is the Museum of Memory and Human Rights. Opened to celebrate 200 years of Chilean Independence, the museum honours the victims of the civic-military regime, which is a touching tribute to the recent struggles of Chilean citizens. 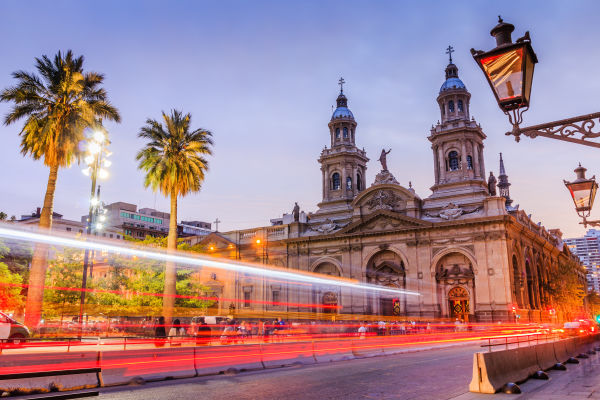 Demonstrating a distinctive personality, an electric ambience spills out onto the sidewalks in trendy neighbourhoods such as Barrio Bellavista, which virtually bursts at the seams with bustling cafes, eateries and beer halls. Unveiling a similarly dynamic atmosphere, markets have become a symbol of the authentic tradition of local cuisine and handicraft goods. Santiago’s most notable market is that of the Mercado Central, widely considered a historical landmark, located in the city centre. Ranked as the 5th best market in the world, don’t forget to try a variety of delicious shellfish dishes and enjoy a tipple of pisco sour, two of the nation’s most cherished delights.

Retreating from the hustle and bustle of this largely urbanised city, Santiago is blessed with pockets of tranquillity, including San Cristobal Hill, the riverside Parque Forestal and Santa Lucia Hill - a perfectly manicured park, adorned with a web of ornate stairways and fountains. However, not to be forgotten is the protective gaze of the snow-covered Andes which elegantly overlooks the capital and showcases one of Chile’s most breath-taking panoramas.

Chile From Top to Toe