It’s not the easiest place to get to – the town of Tortuguero and its surrounding National Park are 254km from San Jose by road and water – but it’s worth the effort. The town is little more than a fishing village connected to the mainland of Costs Rica by a series of rivers and canals. There are no cars or streets. The clue, as they say, is in the name; “Tortuguero” means turtle-catcher in Spanish, and the beaches here have been nesting grounds for sea turtles for centuries, probably due to their isolation. Over the years, turtles were captured and their eggs harvested by local settlers, and by the 1950s the turtles were in danger of extinction. Conservation initiatives led by Dr Archie Carr in the 1960s and regulations passed in 1963 brought the problem under control, and in 1970 Tortuguero National Park was established.

When is the best time to see the nesting turtles?

It encompasses 190 square kilometres of protected land, including the beaches where the turtles nest and also the surrounding tropical rainforest, lagoons, canals and waterways which provide habitat for an amazing diversity of flora and fauna. For many visitors though, especially between July and October, it’s the nesting turtles that are the star attraction. Four different species nest here, the green turtle, the hawksbill, the very rare loggerhead, and the biggest of the lot, the giant leatherback, which can grow to 6½ ft long and weigh well over 1,000 pounds. 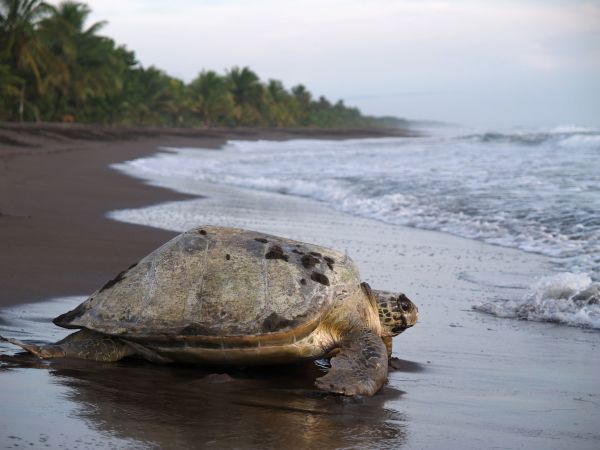 More than just a turtle hotspot

Aside from watching turtles nest, the other main thing to do in Tortuguero is to explore the inland rainforest, either on foot along some well marked trails or, even better, by boat along the canals. Your guide will help to spot some of the incredible varieties of wildlife that live here: howler and spider monkeys, three-toed sloths, jaguars, anteaters, toucans, green macaws, some 350 species of birds and countless butterflies… to list just a few. The jaguars are declining in numbers, being slowly driven out of by encroaching banana plantations. If you are lucky you might get to spot an endangered West Indian Manatee or 'sea cow', swimming underwater, though a combination of hunting and propeller injuries has drastically reduced their numbers.

The land and boat journey from San Jose takes about five hours and will include a stop for breakfast in the town of Guapiles. The coach ride will take you through the Braulio Carillo National Park and numerous banana plantations en route. You then take a boat ride to your jungle lodge which will be your home for a couple of nights.

More than 200 inches of rain falls here annually, so you can expect a downpour at any time of year. Lodges usually provide rain gear such as ponchos and boots, but it is advisable to bring your own just in case.

Coast to Coast in Costa Rica