One of Arequipa's most famous sons, the novelist Mario Vargas Llosa, described the Colca Canyon as “The Valley of Wonders”. Reaching depths of 3,400m (11,150ft) it is twice as deep as the Grand Canyon and possibly the deepest gorge in the world (no-one seems absolutely certain). It’s also a region of snowcapped volcanoes, spectacular agricultural terracing pre-dating the Incas, and a landscape that changes from arid and dusty to lush and emerald green with the seasons. And dispersed across the valley are more than a dozen colonial-era villages with richly decorated churches – a legacy of the region’s prosperous silver mines in the seventeenth and eighteenth centuries.

An early start but worth it...

The biggest attraction above all – quite literally – is the sight of majestic, graceful giant Andean Condors soaring above the steep canyon walls.

To catch this unforgettable wildlife spectacle you’ll need to be prepared for an early morning start from your overnight stay in the village of Chivay. Although this is the valley’s main town, it’s still a charming and somewhat disheveled little place that blends tourist facilities with centuries-old tradition. It also has the lion’s share of restaurants and hotels in the region. 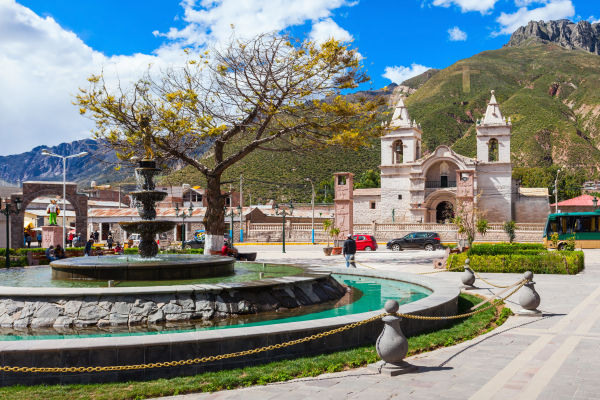 The reason for the early breakfast and departure is to reach Cruz del Condor (Condor Cross) in good time to see the condors take flight, which they do daily from between around 8am and 10am. It’s a 50km (31 miles) journey to the viewing spot 1,200m (3,937ft) above the canyon river. You don’t have to be a birding enthusiast to appreciate not just the Condor itself but also the magnificent setting that surrounds you from this viewing point. It’s a heart-stopping moment when they suddenly begin to appear, circling far below in the gorge and gradually rising on the thermals until they literally soar silently above your head before heading out along the river in search of prey.

Some Andean Condor facts and myths

Their average wingspan is 3.5m (12ft). Just take a moment to think how big that is. In fact, they are so immense and heavy that they cannot simply take off from the ground; instead, they take flight from cliff perches. They also live for such a long time that the Incas believed them to be immortal. In Inca mythology, when the Condor begins to feel old it commits suicide by launching off a rocky peak with its wings folded, only to rise up and be born again. These beliefs made the Condor a symbol of health, freedom, and power, as well as a source of medicinal remedies from its organs and bones.

Of course, the timings and numbers of sightings cannot be guaranteed and can vary with the time of year. There is also some concern that they may be in decline though this isn’t certain. You can be certain of one thing: in the highly likely event that you will be witness to the extraordinary spectacle of Condors in flight, it is something you will never forget.