Visit Sacred Valley of the Incas

The Sacred Valley between Cusco and Machu Picchu is a tranquil and stunningly beautiful stretch of small villages and ancient ruins, spread across broad plain and rugged mountain slopes. At either end of the valley the ancient Inca citadels of Pisac and Ollantaytambo perch high above the valley’s main artery, the magnificent River (Rio) Urubamba. These are some of the finest and most evocative ruins not only in Peru but in all of the Americas. In this valley the Incas built several of the empire’s greatest estates, temples and royal palaces. It was, and still is, a major centre of agricultural production, its fertile soil producing a vast array of fruits, crops and vegetables in expansive fields and spectacularly terraced mountain slopes. Despite the valley’s growing number of touring visitors, the delightful villages dotted along its 60 mile length remain starkly traditional. Residents work the fields with the same methods and tools as their Inca ancestors, and market days remain important rituals, much to the delight of tourists.

A visit to the ancient town of Ollantaytambo, and the astounding temple-fortress clinging to the sheer cliffs beside it, is a highlight of any tour through the Sacred Valley. The huge, steep terraces that guard the spectacular Inca ruins mark one of the few places where the Spanish conquistadors lost a major battle. In 1536 Hernando Pizarro led a force of cavalrymen and footsoldiers to Ollantaytambo intending to capture the rebellious Manco Inca. With arrows, spears and boulders raining down on them from the steep terracing, they were unable to reach the fortress. Things got worse when Manco Inca deliberately flooded the plain below the fortress by means of previously prepared channels. With their horses bogged down in the water, Pizarro ordered a hasty retreat, chased down by thousands of Manco Inca’s victorious soldiers. 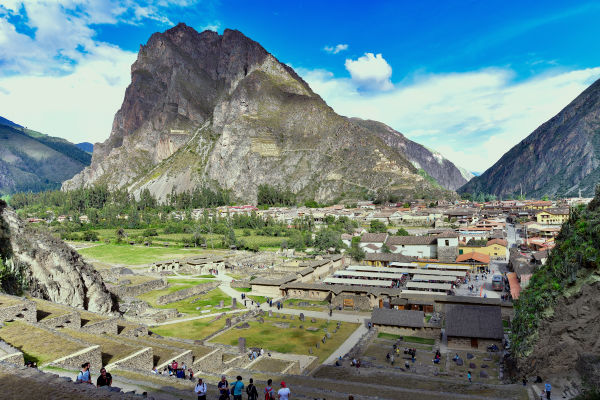 The town retains its character as a traditional settlement and knows how to enjoy life with its highly colourful fiestas, with dancing and music in the main plaza and a riot of colour in the costumes, with intricately woven manta shawls, black and red skirts with zigzag patterns and inverted red and black hats.

Incidentally, talking of textiles, much of the fibres that go into their making come from the camelids that are native to South America. There are four different types, with the Llama and the Alpaca being the most common, plus the Guanaco and the rarer Vicuna.  The fleeces of all four have played a vital role in Peru’s rich textile tradition, and the Vicuna’s luxurious wool is considered to be the finest animal fibre in the world. A visit to a camelid compound on your Sacred Valley tour will enable you to see these unique creatures at close quarters.

The other essential site on the tour is the bustling, charming market town of Pisac and the ruins of the spectacular Inca fortress perched on a mountain spur above. Most people visit Pisac for its amazing markets, held on Tuesday, Thursday and Sunday, though there is always good artisan product to be found any day of the week. It has also become something of a magnet for new-age followers in search of an Andean Shangri-la.

Even if you don’t find Shangri-la in Pisaca, you will find a very good lunch in one of its many excellent restaurants!

Tours of Sacred Valley of the Incas