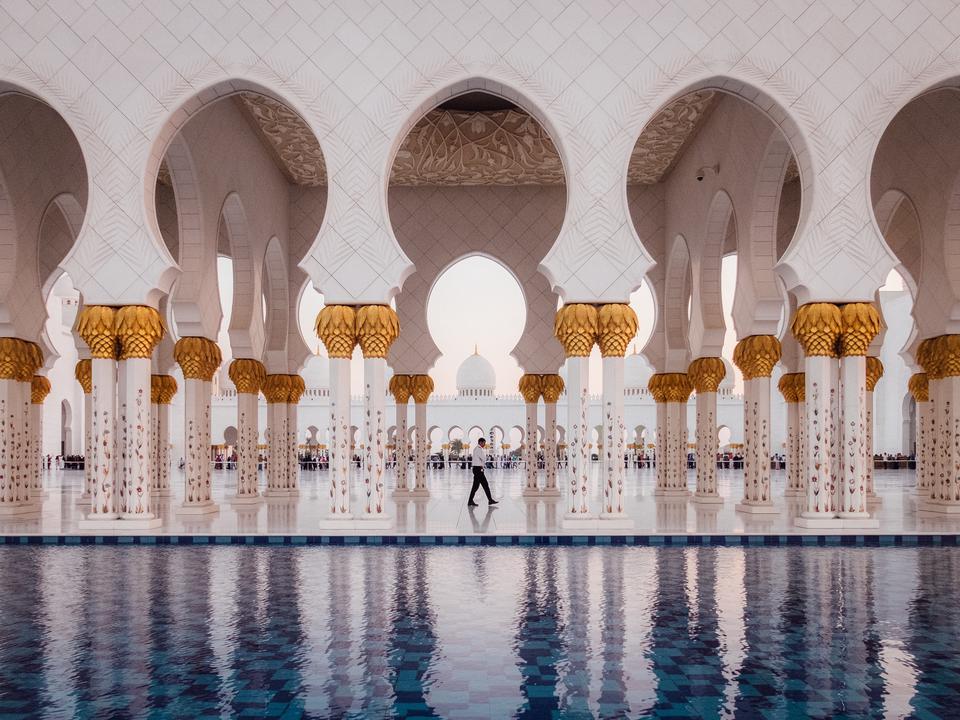 With an Arabic translation meaning ‘Father of the Gazelle’, Abu Dhabi is the second most populated and capital of the United Arab Emirates.

Located on a T-shaped island in the Persian Gulf, Abu Dhabi is a spectacle to behold and the city shows just what a modern metropolis can be. While the wealth of the city is apparent, there’s more of a focus on culture than glitz and glamour.

Abu Dhabi has a hot desert climate with blue skies expected all year round. The ‘summer’ months from June through to September are hot and humid with temperatures averaging above 38°C. During these months, sandstorms can occur, reducing visibility.

The cooler season is from November to March still sees temperatures ranging from the mid- to high-20s. On an average year, January is the coolest month and August the hottest.

Abu Dhabi is home to some must-see sites, number one of which has to be Sheikh Zayed Grand Mosque, one of the largest Mosques in the world with capacity for 41,000 worshipers. Its white and gold design is simply beautiful, especially when caught by the setting Arabian sun.

We recommend, to get a true taste of Abu Dhabi, you also walk along the Corniche, a coastal walkway which offers great views of the city skyline. Or perhaps take a boat tour and head out on the water to get the best views of the glittering skyscrapers of the capital of the UAE. To see a different side of Abu Dhabi, head out on a mangrove kayaking tour to bring yourself back to nature.

Whether you want to find free or popular paid beach, Abu Dhabi is awash with stunning shoreline. The Corniche, backed by the city skyline is known for its famous beachfront and calm blue waters of the Arabian Gulf. Split into different sections, this beach has something for everyone.

Yas Island is the home to one of the top luxury hotels that also comes with stretches of sandy beach to spend a day lounging on.

For those who prefer a more natural beach, Heritage Village beach is a lesser-known beauty across the bay from mainland Abu Dhabi, with white sands and clear waters. It’s a mix of old and new with the city skyline in the horizon and traditional boats along the shore.

Abu Dhabi’s Heritage Village is an authentic replica of a typical Bedouin village that gives visitors an idea of Emirati life before the oil boom. Al-hosn, the oldest building in Abu Dhabi and now a museum tracing the emirates history and culture, is also must-see when visiting.

Whether you’re in the mood for a romantic meal or beach side barbeque, there’s a dining experience for every palate in Abu Dhabi. Visit the Jumeirah at Etihad Towers and enjoy high tea with the city spread out below on the 74th floor of the building. Or, visit what is now one of the oldest of Abu Dhabi’s restaurants, Hakkasan. This hidden gem is an intimate place to have a romantic dinner.

Since the country has strict licensing laws restricting the sales of alcohol, drinking can be restricted to your hotel but locals will be able to help you find where the action is.

The city is famed for its F1 race circuit, located on nearby Yas Island. The area also has numerous championship golf courses.

To cool down from the heat, visit Yas Waterworld. The mammoth theme park is home to waterslides and an inner-tube river ride, as well as the world’s first hydromagnetic tornado water rafting ride, the world’s largest surfable sheet wage, and the Jebel drop, a free-fall speed water slide.

For a great escape from the city, the Liwa Oasis is home to one of the biggest sand dunes in the world, perfect for those wanting to ride dune buggies, try sand surfing or go camel trekking.

Taxis are a popular mode of transport in Abu Dhabi, while a modern fleet of public buses also operate. For those wanting independence while travelling in Abu Dhabi, car rentals are available to those with a valid licence.