The formerly sleepy state of South Dakota made it onto the tourist map in the 1940s when the presidential profiles of four of America’s most notable leaders were sculpted into its Black Hills, an attraction that still inspires and draws millions, decades on.

Mount Rushmore would have looked very different had historian Doane Robinson had his way. The local expert hoped to boost tourism in South Dakota and advocated sculptures of heroes from the American West, with Buffalo Bill and Lewis and Clark topping the list.

Sculptor Gutzon Borglum was the visionary and artist behind the presidential profiles chosen instead, with Presidents George Washington, Thomas Jefferson, Theodore Roosevelt and Abraham Lincoln selected for their historic contributions to the country. Borglum and his son set out carving the famous faces into the sturdy granite of the Black Hills region of South Dakota, with construction beginning in 1927. Hundreds of workers were recruited and large quantities of dynamite brought in to blast and mould the rock into form. Original plans were grandly ambitious and aimed to feature the presidents from head to waist, but insufficient funding forced an end to the project in 1941, leaving it in its current state and Abraham Lincoln with only one ear!

The gargantuan sculpture had its desired effect, attracting over 2 million visitors yearly and earning its title as the “Shrine of Democracy”. Now run by the National Park Service, the feature underwent a $40 million restoration in the 1990s, returning it to its original, chiselled state. 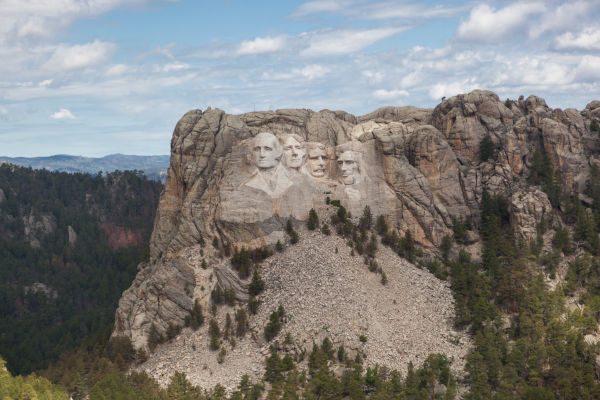 The Presidential Trail is the walkway that leads visitors to an up-close viewing point of Mount Rushmore. Winding 0.6 miles through a forested area, the path also provides a chance to spot the local wildlife that inhabit the park’s borders. Climb the 422 stairs to the top and you’ll be rewarded with excellent views of the famed faces and well-placed photo stops.

Those looking to learn more about the history behind the sculptures can make their way to the Lincoln Borglum Visitor Center where a museum and two theatres allow visitors to delve into the monument’s construction.

In May 2019, the Sculptor’s Studio re-opens to members of the public interested in observing Borglum’s workspace. It was from this space that Borglum planned and executed the sculptures and the area still houses unique plaster models and workers’ tools.

The use of drones is not permitted and visitor access is restricted in a certain section around the sculpture, so make sure to stick to designated paths and viewing areas. The Presidential Trail is made up of a long flight of steps, so wear a comfortable pair of walking shoes if you intend to follow it to its endpoint. Walkways, observations decks and the sculptures themselves are all outdoors, so take note of weather conditions so that you’re fully prepared to face the elements. On-site restaurants and a café are available should you feel peckish or need a light refreshment.

Don’t miss the Heritage Village located near the start of the Presidential Trail – it provides excellent insight into the lives and traditions of the Lakota, Nakota and Dakota Indians who originally inhabited this area.

Yellowstone Rushmore and the Grand Canyon