The sweeping orange arch of the Golden Gate Bridge provides magnificent views over San Francisco Bay and the chance to experience one of modern-day engineering’s greatest marvels.

About the Golden Gate Bridge

Once called “the bridge that couldn’t be built”, the original proposition to construct a bridge connecting the San Francisco mainland and its outlying northern suburbs was met with scepticism. The plan detailed a suspension bridge anchored by 746-foot twin towers, rooted in concrete slabs and supported by two 7,000-foot wire cables – a seemingly impossible piece of engineering.

After a ten-year planning period and considerable opposition, building began in 1933, led by architect Joseph Strauss. Construction was rigorous and claimed the lives of 11 workers, but was completed under budget and ahead of schedule. While its name has puzzled many, the structure was named after a nearby land feature called the Golden Gate while the colour of the bridge was given its own title – ‘GGB International Orange’.

In 1937, the sceptics were silenced when the bridge opened to pedestrians and vehicles without a glitch and went on to become an iconic symbol of San Francisco and an immensely popular tourist attraction.

In 2012, the Golden Gate Bridge Pavilion was opened, providing a welcome centre, exhibits and memorabilia to local and international visitors.

While the bridge serves a functional purpose, the sidewalks of the bridge are also open to pedestrians and cyclists hoping to soak in spectacular views of San Francisco Bay. The sidewalks are bicycle and wheelchair friendly, although roller blades and skateboards are not permitted. Observation points are located on both the north and south sides of the bridge, with parking lots available for those travelling by car.

The Golden Gate Bridge Welcome Center provides visitor information and orientation services and is a good starting point for an exploration of the area.

Fort Point stands at the base of the bridge and was preserved during the bridge’s construction, in recognition of its historic importance. The fort dates back to the American Civil War when it was used to defend the bay against invading warships and is now open to members of the public interested in exploring its interior. 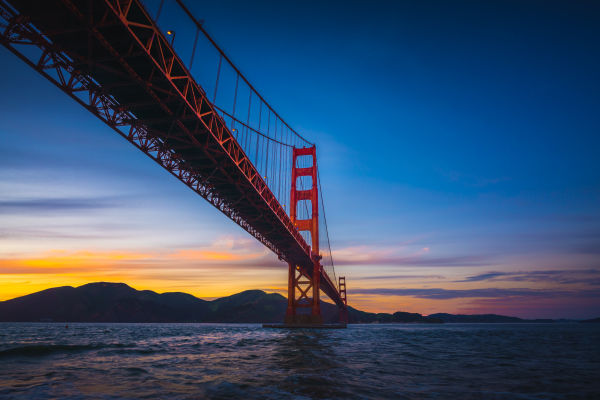 For those looking to make a day of their visit, the Golden Gate Bridge lies within the greater Golden Gate Recreational Area which is also home to scenic walking trails, tucked-away beaches and over 2,000 plant and animal species.

If you’re interested in participating in one of the free walking tours of the bridge, offered twice a week, check the San Francisco City Guides’ schedule ahead of time so that you plan your visit for the right day and time. If you plan to drive across the bridge, be aware that an electronic toll must be paid; for tourists, it’s a good idea to pay this ahead of time through the Bay Area FasTrak website. The walk across the bridge can be chilly, so carry an extra layer to ensure you’re comfortable at all times.

Combine your visit with a trip to the nearby Roundhouse Café which offers 360-degree views of the bridge through its rounded glass windows and is a long-standing diner that offers a slice of history in itself.

Tours of he Golden Gate Bridge

Spirit of the West

Spirit of the West with San Francisco City Stay