Phnom Penh is a city that almost defies description, but here’s one that comes close: “A heaving crossroads of cultures, times, peoples and worlds”. Here you will find extremes of poverty and wealth. Here is a place which cannot escape its past yet strides determinedly into the future. This chaotic capital on the Mekong River brings together Cambodian, Chinese and French influences into a congested, grimy, shiny, vibrant and thrilling mash that somehow seems to work. A place whose recent history is blackened by barbarism is now considered one of the friendliest capitals in Asia. Not a place you will forget in a hurry.

By the time Cambodia became part of French Indochina in 1884, Phnom Penh had developed into a sizeable, largely French-designed city, and by the 1920s “The Paris of the East” was considered to be one of the most intoxicatingly beautiful cities in Southeast Asia. A century later, remnants of stunning French colonial architecture clash with quirky modernist buildings, brash glass and glass affairs and state structures that, to put it politely, divide opinion. And amongst this heady mix remain the Khmer temples and monuments, providing some of the most stunning examples of Buddhist architecture and art.

The gilded Royal Palace, with its classic Khmer roofs and ornate gilding, rises gracefully above flower-strewn gardens and dominated the city skyline. Here the star attraction is the Silver Pagoda, shimmering with 5,000 silver tiles and sheltering diamond-encrusted Buddhas. Angkor sculptures are among the Khmer art treasures at the pavilion-style National Museum, centered on four courtyards. 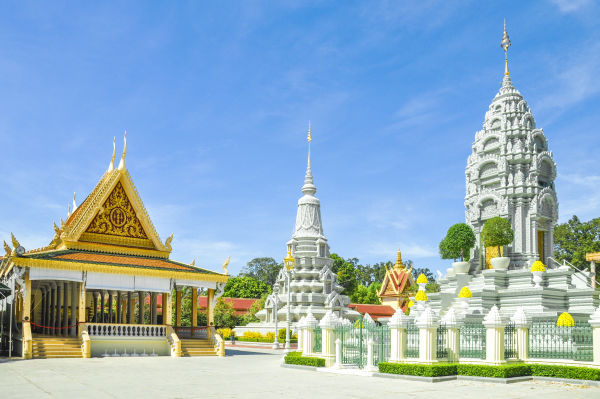 When you’ve had your cultural fill there is no shortage of watering holes to refresh, relax and refuel, especially down at the riverfront where you’ll find bustling bars, vibrant café culture and a world-class food scene.

Asian markets are always a thrill and Phnom Penh’s Central Market is no exception. Under its enormous Art Deco roof, you can barter for everything from handwoven headscarves to weird and wonderful fruit. Or if you’d prefer to go upmarket, Street 240 and Street 178 are the city’s chicest boulevards, dotted with fashion boutiques, art galleries and bookstores.

The horrors of the Khmer Rouge atrocities in the 1970s cannot be hidden away and nor should they be. A visit to the Tuol Sleng Genocide Museum and the Killing Fields of Choeunk Ek is certainly a sobering experience and, for many, a distressing one. The museum is housed in what was the infamous S-21 prison, where more than 17,000 people were held between 1975 and 1978 en route to the Killing Fields, many of them brutally tortured along the way. It’s an ordinary sort of place in a suburban setting, which somehow adds to the horror when you see the rusted beds, instruments of torture and wall after wall of disturbing portraits. As a reminder of man’s inhumanity to man, it is not for the faint-hearted.

Likewise the extermination camp at Choeung Ek, where all those thousands of men, women, children and infants were taken from S-21 to be slaughtered. More than 8,000 skulls, arranged by gender and age, are visible behind the glass panels of a memorial erected in 1988.

The grim saga of Pol Pot and Khmer Rouge in the 20th century is, though, just one part of Cambodia’s rich history dating back to ancient times, and modern-day Cambodians are upbeat and look to the future rather than dwelling on the past.