But for all its sins, Bangkok has a personality that is hard to resist. Look beyond Sukhomvit’s gleaming malls and glass skyscrapers and you’ll find a city that stays true to ancient Buddhist beliefs and traditions. The range of sights and experiences is enough to keep travellers occupied for months. Many who come never go home. The city is a breathtaking blend of old and new, East and West, spiritualism and hedonism, chaos and calm.

Shop until you drop

Bangkok’s shopping is world-renowned. You can go from climate-controlled designer mega-malls to markets like Chinatown or the 15,000-stall Chatuchak, where aromatic spices, fighting cocks and every Thai craft imaginable attract shoppers and people-watchers in equal measure.

Swanky restaurants and street food - some of the best in the world!

And then there’s the food – in many people’s eyes (and stomachs) the best in the world – literally on every level. On the streets steaming woks offer taste sensations at every corner – fresh, delicious and very, very cheap. High above are swanky restaurants perched on top of skyscrapers, where the cuisine is sophisticated, the chefs are world-class and the views are mind-boggling.

Temples as far as the eye can see

Given that Thailand is 95% Buddhist, it’s not surprising that Bangkok has hundreds of temples (“Wats”). Many of the grandest, such as the Grand Palace, Wat Phra Kaew and Wat Po, are in all the guidebooks and tourist itineraries. 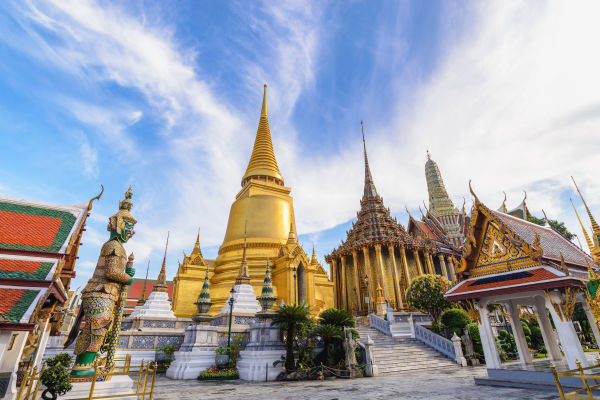 But there are also lots of smaller ones worth seeking out, tucked away down side streets and away from the hurly-burly. Others are more interesting on the inside than the outside.

One such is Wat Traimit, home to one of the world’s largest solid gold Buddha statues. Remarkably, the image was lost for centuries, until one day in the 1950s, when what appeared to be just a typical 13th century Buddha statue fell from a crane while being moved to a new building. The plaster cracked to reveal the solid gold image beneath. The theory goes that it was covered over in plaster to protect it from the invading Burmese in the Ayuthaya period. True or not, it was a happy accident!

The artery of the city

A great way to get a traditional – and relaxing – view of traditional Thai life is to take a boat trip on the Chao Phraya River, which courses through the city and was the key to Bangkok’s rise and prosperity. You’ll see people using the river to bathe, wash their clothes and even brush their teeth (not recommended). Floating kitchens in small craft serve rice and noodles to people on working barges and other boats. Needle-shaped longtail boats with their striped awnings taxi tourists and locals alike along the river, avoiding the gridlocked streets. If ever a river could be described as a city’s artery... this is it.

Thai people have a deserved reputation for being extremely friendly and welcoming, and with a playful sense of fun – and the citizens of Bangkok are no exception. However, beware ‘friendly’ approaches from scammers masquerading as guides in and around major tourist attractions. Just say ‘no thanks’ and don’t engage, or you could end up being ripped off on a scam “shopping tour”. No tourist destination is immune to chancers and con artists, sadly.