Just when you think you’ve seen enough temples to last a lifetime, along comes Wat Rong Khun, better known as “The White Temple”. Whereas most of Thailand’s temples have centuries of history, Wat Rong Khun’s construction only began in 1997. To call this dazzlingly white, icing sugar creation unconventional is something of an understatement, and different people use very different words to describe it because it certainly divides opinion. But see it you must, and make your own mind up.

How did it get here?

By the end of the 20th century, the original Wat Rong Khun temple was in a bad state of repair. Restoration works started but came to a halt due to a lack of funds. A local visual artist and painter from Chiang Rai by the name of Chalermchai Kositpipat decided to completely rebuild the temple and fund the project with his own money. He considers the temple to be an offering to Buddha and believes the project will give him immortal life. He certainly won’t be around to see the finished article as it is not expected to be completed until 2070. When completed, the White Temple compound will have nine buildings, including the existing ‘ubosot’ (main temple), a hall of relics, and an art gallery and living quarters for monks. 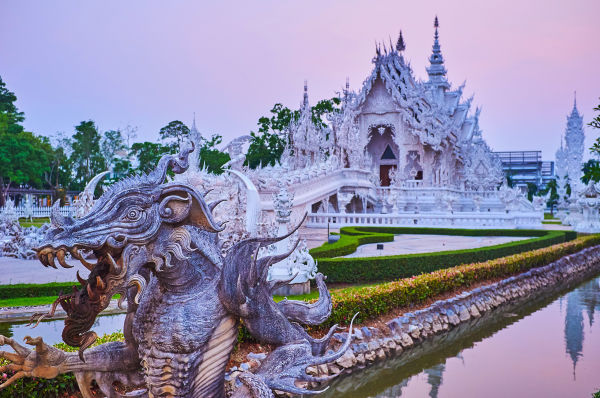 Seen from a distance, the temple appears to be made of glittering porcelain; a closer look reveals that the appearance is achieved through a combination of whitewash and clear-mirrored chips. According to Kositpipat, the white plaster symbolises Buddha’s purity, while the pieces of glass represent Buddha’s wisdom.

The main temple (ubosot) is entered via a bridge over a sea of demons, skulls and grasping hands, which is supposed to represent the transition from the temptations and desires of earthly existence to Nirvana on the other side. After crossing the bridge you’ll arrive at the “Gate of Heaven”, guarded by two creatures representing Death and Rahu, who decides the fate of the dead. The interior of the temple (where photography is not allowed) is a bizarre mix of traditional and modern imagery. Murals combine scenes from the life of Buddha with images of modern Western icons such as Elvis, Michael Jackson, Keanu Reeves (as in The Matrix) and even Superman.

This weird and wonderful project is frequently likened to the work of Gaudi in Spain, not least by Kositpipat himself. Others see it as more Gaudy than Gaudi, an absurd exercise in pure kitsch. And not surprisingly there are more than a few Buddhist traditionalists who view the temple as sacrilegious. Whether you come to see it as a work of art or a piece of nonsense, you should definitely come to see it!

The day the earth moved

On 5th May 2014 the temple was damaged by an earthquake. It was closed and Kositpipat announced he would demolish the structures for safety reasons and would not rebuild it. But when an expert inspected and affirmed the buildings were structurally unharmed, the artist changed his mind and declared he would restore the temple within two years and would dedicate the rest of his life to the project.

BangkokThe Bridge on the River Kwai