Granted UNESCO World Heritage status in 1999, Hoi An has a traditional, laid-back and almost dream-like atmosphere that makes it a magnetic attraction in Vietnam. And yet, despite its popularity, it retains a peaceful old-world charm thanks to concerted efforts to prevent the 21st Century curses of traffic and pollution. For example, it’s the only place in Vietnam that restricts motorcycle use. And the face of the Old Town has preserved its amazing legacy of tottering Japanese merchant houses, Chinese temples, and ancient tea warehouses.

In the 15th Century, Hoi An became a lucrative trading post when Chinese, Japanese and European vessels ran with the trade winds to congregate at a port that was then called Fai Fo (it was renamed Hoi An in 1954). Its dominance as a trading port lasted until the 18th Century when a combination of a silting river mouth and rebelling dynasties meant its days were numbered. Although bad for business, these events protected the town from further development. It somehow escaped damage during both the French and Vietnam Wars and retains a distinctly antiquated air.

So much to do…

The whole town is an attraction, with its narrow streets of historic buildings buzzing with open-air craft shops, cafes, art galleries, and food markets. It’s a great place to explore on foot because many streets are vehicle-free zones. If you’re an artist, bring your sketchpad and paints; photographers will need lots of memory cards! The city’s most photographed site is the Japanese Covered Bridge which links the Chinese and Japanese sectors. Inside is a small temple to the Taoist god of weather, Tran Vo Bac De, an important figure to visiting sailors and merchants. 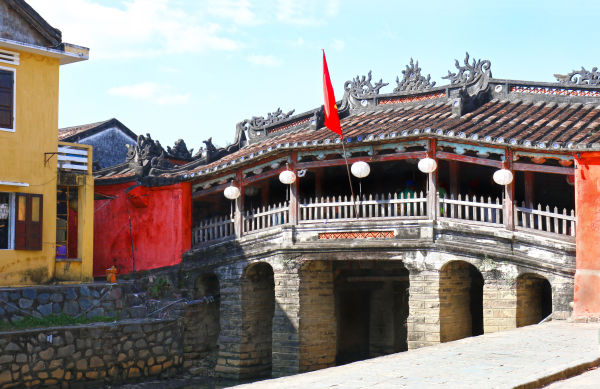 Many visitors to Hoi An come away with a newly-tailored suit or dress, thanks to the countless number of tailors who have been trading for generations from when Hoi An was a major port on the Silk Route. Yours can be made to order within 24 hours, usually very high quality at amazingly low cost. There are also skilled cobblers making custom shoes at affordable rates, mostly around the market on Tran Phu Street.

Hoi An’s Old Town has three museums covering history, culture, creamics and the ethnology of the Sa Huynh people. They’re located in some lovely old town spaces and are definitely worth a visit to pick up some interesting morsels, even if the information they provide can be a little patchy. The Museum of History and Culture is a prime example of this but its collection, ranging from Cham times to the trading heyday that ended in the 19th Century is quite absorbing. The Museum of Sa Huynh Culture is focused on an ancient culture that flourished in this part of central Vietnam between the 2nd Century BC and the 2nd Century AD. Somewhat incongruously the museum also exhibits a collection of items from Hoi An’s contribution to Vietnam’s communist revolution. The nearby Museum of Trade Ceramics showcases Hoi An’s time as a centre of trade in Chinese, Japanese and Vietnamese ceramics between the 16th and 18th Centuries. A small display at the back is helpful in explaining the old town’s different architectural styles.

All of these museums are close to one another in the small centre of the old town, and you will pass them as you wander.

Tran Phu Street is lined with interesting art galleries, pottery and woodcarving vendors. Along the river, you will also find lots of places that sell ceramics. You may think these too fragile to return home safely with but shopkeepers are masters at packing for travel, and will do so before you’ve even agreed on a price or have decided to buy.

Tours of Hoi An