A trip along the Mekong River, whether long or short, provides a feast for the eyes and senses. Small craft villages, mangrove swamps, island orchards, emerald green rice paddies, and spectacular floating markets… you could be forgiven for thinking you’ve stepped into the pages of the National Geographic.

Incredible diversity around the Mekong Delta

A visit to the Mekong Delta is so memorable because of the region’s incredible diversity. Everyday scenes include children riding on the backs of water buffalo or cycling to school through country lanes clad in white; conical-hatted rice workers stooping in a sea of emerald; flocks of storks circling over a sanctuary at dusk… this truly is a voyage into another world.

The Mekong Delta is Vietnam’s “rice basket”, an agricultural miracle that provides more than a third of the country’s food crop from just ten percent of its total landmass. It is also the world’s largest inland fishery, second only to the Amazon River in terms of fish biodiversity.

It wasn’t always this way. Until the end of the 17th Century, the region was sparsely inhabited. This started to change gradually in the 18th Century, then rapidly in the 19th Century under the French government, who saw huge profits to be made with such fertile land. Peasants were encouraged – and paid well – to tame and till tracts of the boggy delta. Now the region is densely populated with 18 million people, mostly engaged in farming and fishing, whilst tourism is also a crucial part of the economy. Besides the human population, the Mekong Delta is also home to 1,200 bird species, 800 species of reptiles and amphibians, and 430 mammal species. Oh, and there are no fewer than 20,000 species of plants! If you’re looking for biodiversity, you’ve come to the right place! 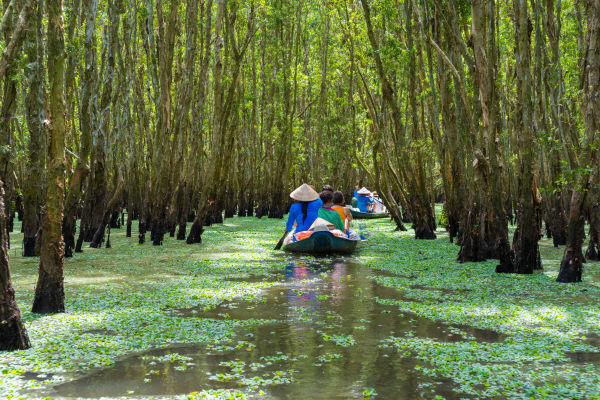 How much you’ll see of this fascinating region obviously depends on the length of your trip. Among the highlights are Can Tho, the largest town on the delta with picturesque canals and waterways, not to mention good hotels and facilities. From here a visit to the Cai Rang Floating Market is an unmissable experience. One of the delta’s hidden gems is the small, sleepy and utterly charming colonial town of Sa Dec, famous for its beautiful flower gardens. By contrast, close to the Cambodian border is the vibrant town of Chau Doc, a fishing and farming community situated in the heart of a gigantic grid of rice field where floating farms overspill into the waters. The nearby Sam Mountain provides a surprising and welcome undulation in the surrounding plains. The opening up of the border means that many Mekong itineraries now include a visit to the Cambodian capital of Phnom Penh. This can prove to be an experience of contrasting emotions. It can take in the magnificence of the Royal Palace and the National Museum; but it can also include a guided tour of Toul Sleng Prison Museum and the Killing Fields Choeung Ek, both grim reminders of Cambodia’s bloody past. These excursions may prove distressing for some, but they are important pieces of Cambodia’s historical and cultural puzzle.

On a more uplifting note, if the killing fields are a reminder of the notorious Khmer Rouge brutality, then Angkor Wat is the ultimate expression of Khmer genius – an awe-inspiring temple that is stunning for both its grand scale and its incredible detail. A visit to this breathtaking site provides an inspirational experience on Mekong Delta cruises beginning or ending in Cambodia.