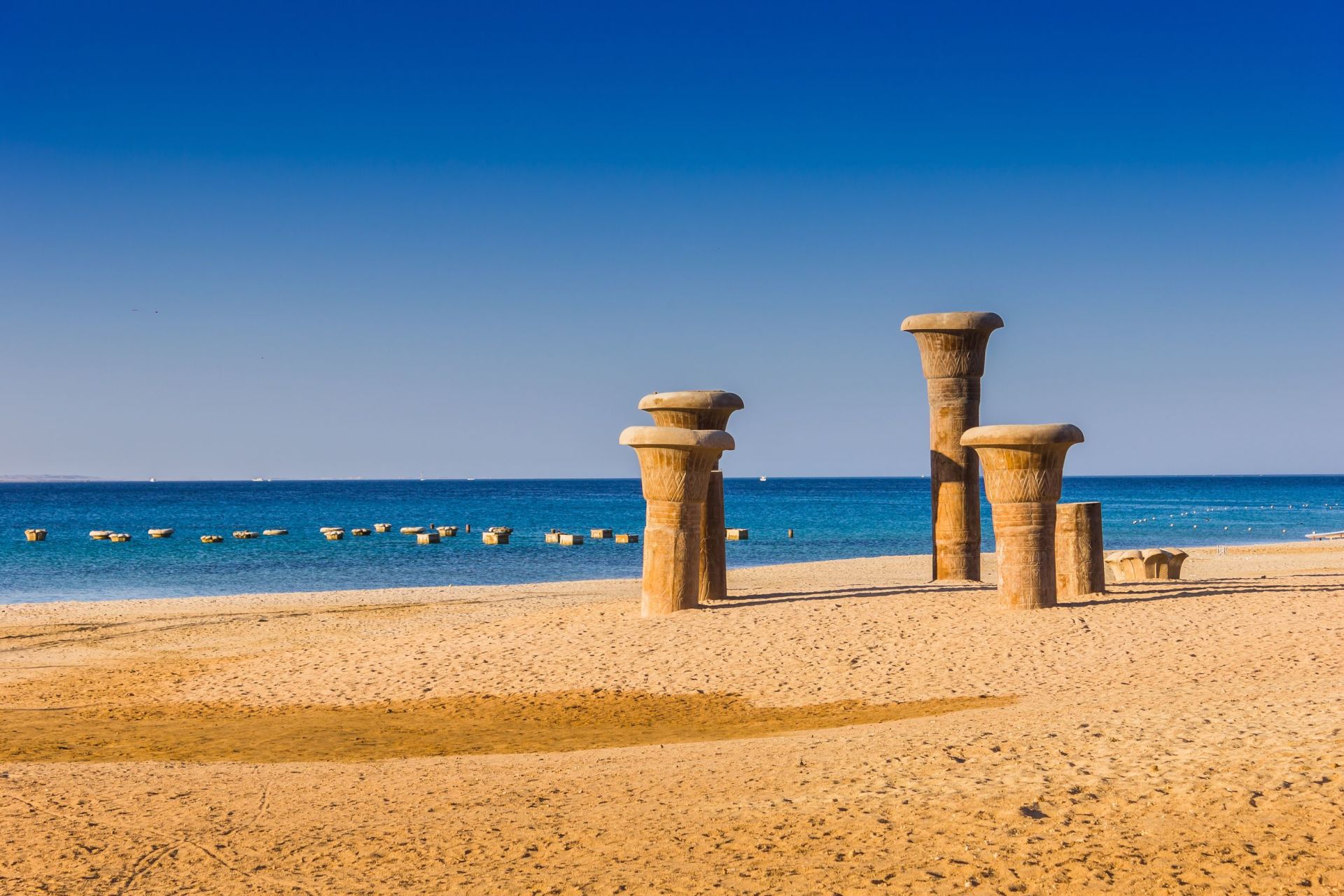 Cairo Pyramids and The Nile with Hurghada Beach Stay

Hurghada, on Egypt's Red Sea coastline, is a resort famed for its stunning beaches and fantastic diving and snorkelling opportunities. Enjoy 4-nights relaxing in Hurghada at the end of your tour with this extension.

Depart London on your scheduled flight to Cairo. Upon arrival, you will be met and transferred to your hotel where you can enjoy the rest of the day at leisure.

Cairo is a melting pot of culture, where ancient landmarks and modern districts harmoniously convene. On the banks of the world's longest river, enjoy delicious cuisine and immerse yourself in ancient history on today's tour of this lively city's most world-renowned sites, led by a professional Egyptology guide. Journey to the complex which houses one of the Seven Wonders of the World - the mighty Giza Pyramids, comprising of six impeccable geometric structures, erected to house the immortal remains of deceased Egyptian Pharaohs. Majestically overlooking the temples and tombs of Ancient Egypt, head towards the nearby 73-metre statue of the Sphinx which depicts a mythical half-lion, half-human creature, and was astonishingly carved from one single piece of limestone. Following lunch, transfer back to your hotel where you can enjoy the rest of the day at leisure.

This morning explore a treasure trove of fascinating history, at the Egyptian Museum, where unbelievable exhibits showcase over 120,000 artefacts, including Egypt's earliest hieroglyphic engravings and its most iconic relic - Tutankhamun's gleaming golden mask. This afternoon is yours to spend at leisure. Alternatively, you could experience one of Cairo's most remarkable sights with a visit to the Citadel of Saladin, strategically built upon the highest point in Cairo as a colossal defence against crusader invasions. Concealed behind the excellently preserved fortification stone walls, explore a collection of museums and palaces, as well as the spellbinding Muhammad Ali's 19th-century Alabaster Mosque, whose towering minarets regally overlook Old Islamic Cairo.

Depart Cairo after an early breakfast and transfer to the airport for your flight to the city of Aswan, where you will embark on your Nile River Cruise. After lunch onboard, enjoy your first excursion, and witness a pioneering example of hydro-engineering on the banks of the River Nile at the High Dam. Later, gain a fascinating insight into ancient Egyptian stone-work techniques with a visit to the Unfinished Obelisk in the Northern Quarries, where the marks of workers' tools and faint carving outlines eerily remain visible. Remaining attached to the bedrock below, this monumental tower would have weighed a mind-blowing 1,168 tonnes if the development had succeeded, however, plans were abandoned when cracks began to appear in the granite. Finally, take in the splendid Temple of Philae, built in 690 B.C in honour of the goddess of health and marriage; known as the last temple of classical Egyptian design, marvel at the domineering Pylons embellished with traditional hieroglyphs from its new position upon Agilkia Island, having been rescued from a watery grave on Philae Island during the dramatic flooding of Lake Nasser. Return back to your vessel, for dinner onboard and your first night on the Nile.

Early this morning, you have an optional excursion to visit the iconic temples of Abu Simbel (at a fee). Intricately carved into a golden sandstone cliff overlooking the Nile, wonder at the mesmerising 66-foot seated figures of King Ramses, before returning back to the boat for breakfast. After a leisurely morning, enjoy a unique sailing experience as you breathe in fresh river breezes upon a delightful felucca, a traditional wooden sailing boat which carries you to the botanical gardens of Kitchener's Island. Brimming with subtropical plants and brightly coloured blooms, bask in tranquillity as you wander through this beautiful setting, where the gentle flutter of palm fronds serves as a serene soundtrack. This afternoon, glide along the Nile and sail into Kom Ombo for an unforgettable visit to the impressive Temple of Kom Ombo. Unique in its design, the symmetrical rooms, courts and halls were identically duplicated and dedicated to two sets of gods: Sobek, the god of fertility, and Haroeris, the god of the sky. Meander amongst the elaborately decorated interior, whose columns and walls showcase detailed etchings and carvings, before returning to your ship for a tasty dinner on board.

Pass through the Esna Lock and soak in incredible views as you sail towards the ancient settlement city of Edfu, disembarking for the chance to visit the Temple of Horus. Guarded by gargantuan granite statues of Horus, enter through the towering gateway and discover the halls and chambers of this spellbinding ode to the gods which was once concealed under a blanket of sand. Returning to your ship for breakfast, enjoy a morning at leisure on board as the cruise sails towards Luxor. After lunch, continue to the expansive Karnak Temple Complex to wander a section of this 200-acre site. Nearby, admire the strikingly graceful Luxor Temple, before returning to your ship for a night moored in Luxor.

After breakfast, cross over to the west bank of Luxor, where you will visit the Valley of the Kings, Ancient Egypt's royalty. From here continue to the Temple of Hatshepsut, a magnificent memorial temple built into the cliffs of this sacred valley. En route back to your vessel, stop at the Colossi of Memnon, massive twin statues, the gatekeepers of the valley. Blanketed in an extraordinary golden hue, sail the world's longest river and delve into a captivating kingdom brimming with ancient monuments and old-world charm.

Day 8
Luxor to the UK

After breakfast, transfer to the airport for your return flight to the UK via Cairo.

A visa is required for entry into Egypt. British passport holders need a visa for visits of up to 30 days. You can get a visa on arrival by payment in Sterling, US Dollars or Euros; the visa fee is US$25 at approved bank kiosks within airport arrival halls, before reaching immigration counters. Alternatively, we work closely with The Travel Visa Company who will be able to arrange your visa on your behalf. Please call them on 01270 250 590 and quote 'Mercury Holidays'. Your passport should be valid for a minimum period of 6 months from the date of entry into Egypt. Visa requirements are subject to change and obtaining a visa is the responsibility of the traveller and not Mercury Holidays. We recommend you check with your destination's tourist board or embassy prior to departure for the most up to date guidelines regarding visas and passport validity.

We strongly recommend that you and all members of your party are suitably insured as soon as you book your holiday. It is a condition of booking that you must have suitable travel insurance. It is important that you purchase travel insurance that suitably covers your participation in whatever activities you may undertake at the time that you make your booking. To assist you with this, we have arranged travel insurance in partnership with Holiday Extras. To arrange your travel insurance with Holiday Extras, please call 0800 781 4237 and quote 'WK830' for preferential rates. Please ensure you provide us with the name of your insurer, policy number and their 24 hour emergency contact number as soon as possible. Mercury Holidays will not be liable for any costs incurred by you due to your failure to take out suitable travel insurance from the date of booking.

Baggage allowance (per person): Each passenger is entitled to 1 piece of hold luggage with each bag not exceeding 23kg. Hand luggage: One piece not exceeding 8kg and with maximum total dimensions not exceeding 118 cm (55 cm x 40 cm x 23 cm). Should you wish to take additional luggage, you will need to pay extra at check-in. Please refer to the airline's website for further details and the most up-to-date information.

The minimum number of travellers in your group will be 1-2. If in the unlikely event there are less than 1-2 people booked on your tour date, we will endeavour to reduce any disruption to your holiday and try to operate your tour with lower passenger numbers. If we are not able to operate your departure date then you may be asked to change to a different date and a full refund will be made available to you should this alternative not be suitable.

The currency in Egypt is the Egyptian pound. We recommend that you exchange your currency before you leave the UK. However, cash machines are available in all the major cities to withdraw money in the local currency.

You will need to take some extra money with you to cover any personal purchases, such as souvenirs, laundry and extra drinks and snacks. Approximately £300-£400 per person will be sufficient for the duration of the tour.