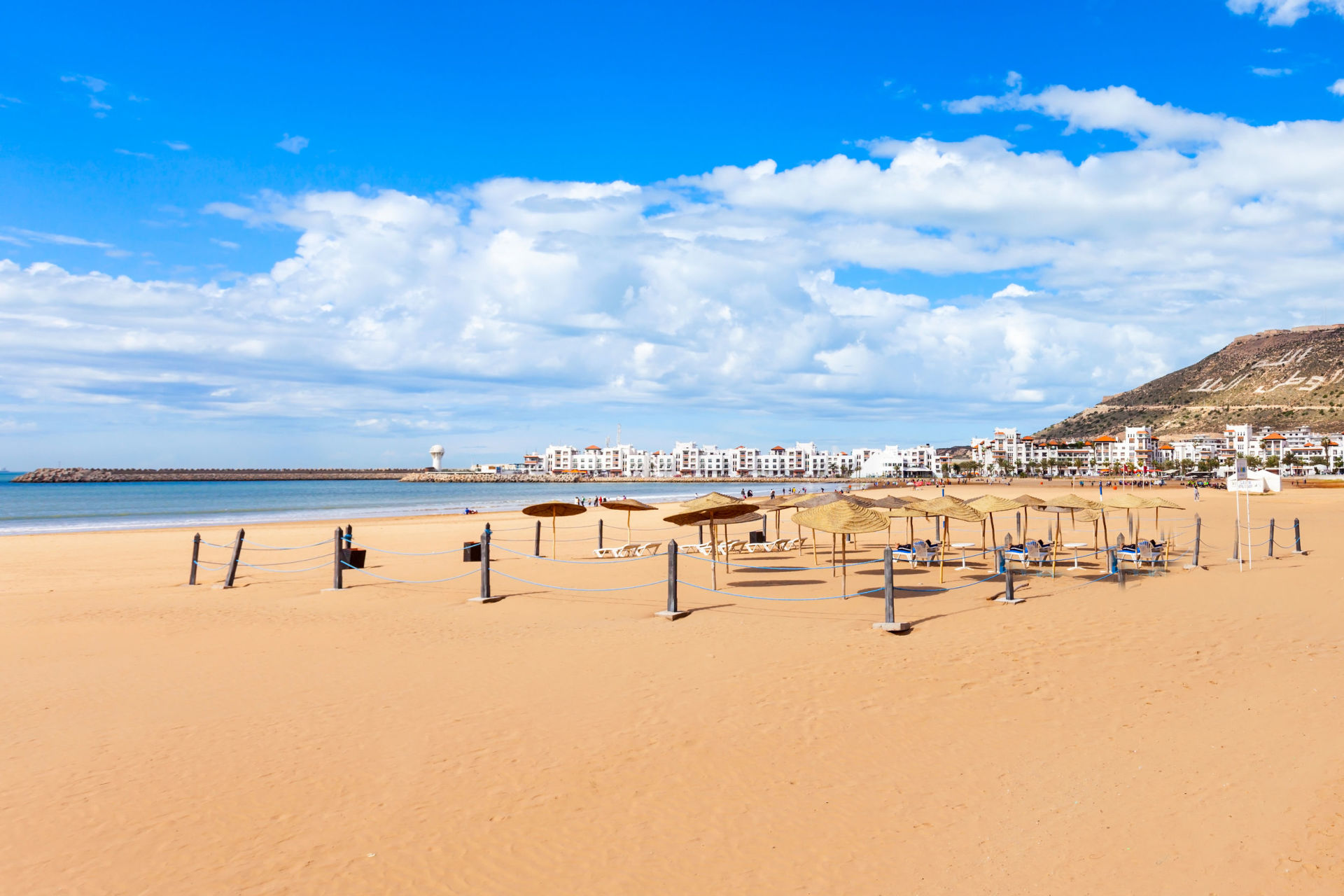 Relax at the end of your Morocco tour and spend 4 nights in the charming town of Agadir. This popular beach resort is famed for its whitewashed buildings and long stretches of golden sand beach.

Depart London on your scheduled flight to Marrakech. On arrival, you will be met and transferred to your hotel, arriving in time for your first dinner in Morroco's atmospheric capital city.

After breakfast, journey north to Morocco's largest city, Casablanca, and uncover this modern metropolis stretching along the Atlantic coastline. On arrival, wander around the League of Arab States Park, a verdant area dotted with palm trees, before continuing to the Notre Dame de Lourdes Church with its exquisite stained-glass windows. Passing the busy shopping area of the Habous Quarter, you will arrive at the esplanade of the magnificent Hassan II Mosque which boasts the world's tallest minaret. Check into your hotel for dinner and your overnight stay.

After breakfast, travel to Rabat for a half-day city tour of Morocco's colourful capital city. Visit the Hassan Tower, a 12th century minaret built from distinctive red sandstone and one of the few parts remaining from the original Hassan Mosque, then explore the nearby mausoleum of Mohammed V with its stunning mahogany domes and intricate gold leaf decorations. Travel onward to the ancient Roman town of Volubilis, the country's best-preserved archaeological site. Wander past crumbling pillars and intricately laid mosaics then delve deeper into Morocco's historical fabric on a visit to Meknes. There, explore the settlement of the ruthless tyrant Sultan Moulay Ismail who founded this imperial city for his harem of 500 wives and 12,000 horses. View the Sultan's resting place, which boasts some of Morocco's best craftsmanship, mosaics and stucco then journey to Fez, arriving in time for dinner.

Brimming with history, numerous civilisations have settled or passed through Fez, leaving a legacy of palaces, mosques and museums filled with precious treasures. Begin your full-day city tour at the ancient medina of Fez, home to the architecturally rich Andalucian Quarter. Traverse some of the 9,000 streets of this maze-like district, passing some of the city's oldest and most esteemed mosques and religious schools, including the 1,200-year-old Al Kairouyine university and grandiose El Qaraoyin Mosque. The city is alive with traditional crafts and a visit to a local tannery provides a fascinating insight into the sights and smells of a craft that has remained unchanged for centuries.

Bidding farewell to Fez this morning, journey past the small town of Azrou, enjoying fantastic views of the area's shimmering lakes and dense cedar forests on a spectacularly scenic drive. Arrive in Beni Mellal, tucked away in the Middle Atlas Mountains, in time for dinner at your hotel.

Depart for Marrakech this morning, stopping first at the breath-taking Ouzoud Falls, set within the friendly Berber village of Tanaghmeilt. Take in this 3-tiered waterfall and the surrounding valleys, caves and gorges, keeping an eye for resident apes who drink from these waters. Check into your hotel in the ochre-coloured city of Marrakech and enjoy a relaxing afternoon at leisure. Later this evening, visit the world-famous Djemaa El Fnaa Square and witness the vast esplanade transform from a day market to an immense show of dancers, musicians, soothsayers, snake charmers and dancing monkeys.

Today's tour takes you to the El Bahia Palace and tombs of the Saadian princes, then on to Dar El Basha Quarter to see its traditional Moroccan restaurants. Peruse the basketwork, dried fruit, spices and fabrics of Kessabine and Smarine souks (markets) and explore the ancient, former slave market of Rahba Kedima Square, where locals arrive in droves to buy potions for magic spells and ingredients ranging from bark to chameleons. While dinner is provided at the hotel, an optional evening of belly dancing and folklore is also available (at a fee).

Day 8
Marrakech to the UK

Transfer to the airport for your return flight to the UK or continue on to your extension.

In the morning you will check out from your hotel and transfer by car to Agadir on Morocco's coast for your extension. Upon arrival check in to your hotel.

Relax and enjoy some downtime at your chosen beach hotel, You can choose to explore the town of Agadir itself or simply enjoy the facilities your hotel has to offer.

Day 13
Agadir to Marrakesh to the UK

Transfer to the airport for your return flight to the UK.

We were well lookedafter from start to finish. It was just unfortunate that Covid-19 intervened. The Mercury rep met us at the airport on arrival and stayed with us when we left. Hamsa our guide was excellent, and looked after us above and beyond, especially when we had to stay in our room at the end. Driver was excellent.

The guide was excellent caring for us very well in difficult circumstances. When places closed he found alternatives for us which still made a super holiday. Ihsan was a godsend ensuring we were able to get on our BA flight home when flights were being cancelled.

Our guide for the tour was marvellous, very reassuring re flights, a good sense of humour and very knowledgeable,

Hamza, who was our guide, deserves a medal for his outstanding efforts. A natural communicator with a sense of humour too, he was personable and caring from the start. He was a brilliant guide explaining all the history, politics, architecture, folklore,etc, as it became relevant and showing us his beautiful country with amazing knowledge. When we asked questions he was incredibly informative and even found out more answers from other sources about the wildlife for some of our group. We will always be grateful for having Hamza as our guide. An absolute gem! Thank you.

the hotels were good including the food

A visa is not required for your trip to Morocco. Further advice should be sought from the applicable tourist authority for other nationalities and for general queries. We strongly advise you check your destinations' Tourist Board or Embassy for the most up-to-date guidelines regarding passport validity.

Your initial flight is to Marrakesh Menara Airport with British Airways, departing from London Gatwick South Terminal. Your return flight is from Marrakesh Menara Airport with British Airways. Baggage allowance (per person): Each passenger is entitled to 23kg of hold luggage plus 1 item of hand luggage not exceeding 56cm x 35cm x 22cm in size one personal item (such as a handbag or laptop case) not exceeding 43cm x 22cm x 25cm. Weight restrictions will be finalised on your E-ticket receipt. Should you wish to take additional luggage you will need to pay extra at check-in. Check-in should be at least 3 hours before departure. If you wish to arrange Airport car parking or accommodation at preferential rates, we recommend you book this in advance with Holiday Extras on 0871 360 2000, quoting HX313.

The minimum number of travellers in your group will be 10, and the maximum will be 30. If in the unlikely event there are less than 10 people booked on your tour date, we will endeavour to reduce any disruption to your holiday and try to operate your tour with lower passenger numbers. If we are not able to operate your departure date then you may be asked to change to a different date and a full refund will be made available to you should this alternative not be suitable.

The currency in Morocco is the Moroccan Dirham which is a closed currency and will need to be exchange in resort. Cash machines are available in all the major cities to withdraw money in the local currency.

You will need to take some extra money with you to cover any dinners where these are not mentioned in your itinerary and personal purchases, such as souvenirs, extra drinks and snacks. Approximately £200-£300 per person should be sufficient for the duration of your tour. Tipping is not compulsory and is at your discretion. We would recommend approximately 150DHS (£11.00) per person which is split between the drive and guide. Should you wish to tip, this will be collected by your guide at the end of your tour for your convenience. It is asked that if you do not tip in the local currency, please do not give coins as these are difficult to exchange.