Essence of South Korea and Japan 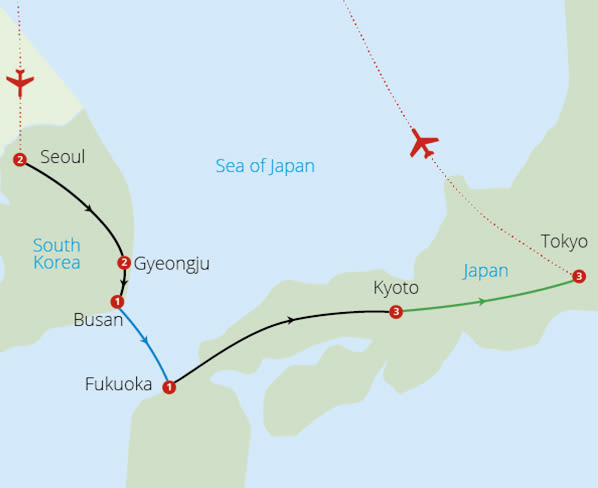 Depart London on your scheduled overnight flight to Seoul.

Upon arrival, you will be met for a short tour of Seoul. A fusion of high-tech, urban parks and traditional palaces characterise South Korea's dynamic capital. Visit one of the city's most beloved landmarks - the N Seoul Tower. Ascend 480 metres above sea level to the observatory deck for incredible 360-degree views overlooking the city skyline, and later enjoy the tantalising tastes of local delicacies for dinner

Set out on a morning tour of the heavily fortified Demilitarised Zone (DMZ), an untouched region which separates North and South Korea; admire impeccable panoramic views from the iconic Dora Observatory, before exploring the secret passageways of the 3rd Infiltration tunnel. Next, witness two routes that connect North and South Korea at Dorasan Station and the Bridge of Freedom, which currently serve as symbolic emblems of hope for the reunification between these two countries. From here, return to Seoul for an afternoon sightseeing tour. Commencing at the majestic Gyeongbok Palace, continue to the National Folklore Museum, before immersing yourself in rich cultural traditions through Insa-dong antique street, whose narrow avenues are lined with an array of speciality regional goods. Later, wander through Bukchon Hanok Village's charming streets before browsing through a revered collection of quality silk products and vintage clothing in Gwangjang Market, one of the largest of its kind in Korea.

Day 4
Seoul to Gyeongju via Andong

This morning, travel towards Andong, the spiritual capital of South Korea. Having maintained many aspects of authentic Korean culture, Andong City's tangible heritage manifests itself in the charming 14th-century riverside village of Hahoe; with well-preserved Joeson architecture and traditional thatched houses, you'll be transported to a bygone era. Soak in vistas of this clan-based village from nearby Buyongdae Cliff before transferring to Gyeongju for this evening's stay.

A full-day tour of Gyeongju takes in the major sites of Korea's ancient former capital, known as the 'Museum Without Walls'. Journey from the immense Buddha statue which lies in Seokguram Grotto to UNESCO-listed Bulguksa Temple where you'll explore its Buddhist relics, pavilions and gardens. Continue onward to the age-old observatory of Cheomseongdae before taking in the greenery of Tumuli Park and browsing through ancient artefacts in the Gyeongju National Museum

Today, explore the sights of Busan and begin at the United Nations Memorial Cemetery, which honours the lives of the soldiers who were tragically lost during the Korean War. Next, take in the delights of vibrant Camellias which flourish on Dongbaekseom Island from January to May, and return to shore for the chance to meander through the bustling stalls of Jagalchi Fish Market. After marvelling at the soaring Busan Tower, visit the hawkers of Kukje Market before concluding today's exploration with a leisurely stroll through the Gamcheon Cultural Village.

Following a morning at leisure, transfer to the port of Busan and say goodbye to South Korea as you set sail towards the Japanese 'Gateway to Asia', Fukuoka, well known for its ancient temples, beaches and beautiful Maizuru Park which contains the ruins of 17th-century Fukuoka Castle. Savour the tastes of popular Japanese dishes at a local restaurant this evening.

Board a morning bullet train bound for Kyoto, and experience Japan at its finest as you wander the Zen gardens of Kodaiji Temple. Spend the rest of the day at leisure, perhaps taking the opportunity to look out for geishas draped in lavish kimonos as you meander through the geisha district of Gion.

Explore the UNESCO-recognised fortifications of Nijo Castle, and witness the gilded pavilion of Kinkaku-ji. Continue to the outskirts of Kyoto and witness thin shreds of sunlight which peek through the luxuriant towers of Bamboo in the enchanting Arashiyama Bamboo Grove, and next, head to the 14th century Tenryuji Temple, where tranquil gardens have survived the test of time as their original design is still intact. Finally, cross the Togetsukyo wooden bridge which is suspended above the Katsura River.

Following breakfast, travel to the city of Nara where you'll get the chance to watch over 1,200 protected deer roaming Nara Park. From here, take a short stroll towards the crimson Shinto shrine of Kasuga- Taisha; standing majestically against a backdrop of the Kasuga Mountain. Conclude today's exploration at one of the most important imperial Buddhist Temples in Japan, Yakushi Temple, before returning to Kyoto for a Maiko performance and evening meal.

Transfer to Kyoto railway station and board a bullet train to Japan's dazzling capital, Tokyo. This afternoon, soak in the sights of this cosmopolitan city at your own pace.

A fusion of futuristic districts, centuries-old palaces and family-run ramen booths, Tokyo has survived a turbulent past to prosper as one of the world's major metropolises. A full day of sightseeing will commence at Sensoji, Tokyo's oldest temple before you follow in the footsteps of Japan's masterful sushi chefs in an enlightening sushi-making demonstration. Continue to the bustling area of Ginza, the country's biggest luxury shopping district and visit the iconic Akihabara Electric Town to experience the city's passion for all things electronic.

Today, visit the iconic Hakone National Park, home to one of Japan's most instantly recognisable sights - Mount Fuji, fringed by thick forests and a crescent-shaped ring of shimmering lakes. As you glide over sulphuric hot springs along the Hakone Ropeway, marvel at spectacular vistas of Owakudani Valley, an active volcanic crater, where hot rivers, bubbling pools and steam vents serve as a reminder of the area's volcanic might.

Transfer to the airport for your return flight to the UK or chosen extension.

Essence of South Korea and Japan with Tokyo City Stay

Each passenger is entitled to 23kg of hold luggage. There is also an allowance of one cabin bag not exceeding 25cm x 45cm x 56cm in size and one personal bag not exceeding 45 cm x 36 cm x 20 cm that you can take on the aircraft as hand luggage. Weight restrictions will be finalized on your final documents. Should you wish to take additional luggage you will need to pay an additional fee for this at check-in. Heathrow Airport advises that you should arrive at the airport at least three hours prior to your flight time for international departures. IMPORTANT: Please note that final flight details will be confirmed on your final documentation which will be sent to you approximately 10 days before departure. A printed E-ticket is no longer required at check-in, all you need to do is present your passport to the staff at the desk and your boarding pass will be given to you.

This tour is accessible to most people with a good level of fitness and normal mobility. It involves climbing steep stairs and getting on and off coaches, trains and metro trams. This tour is not suitable for anyone with walking difficulties.

The minimum number of travellers in your group will be 10, and the maximum will be 40. If in the unlikely event there are less than 10 people booked on your tour date, we will endeavour to reduce any disruption to your holiday and try to operate your tour with lower passenger numbers. If we are not able to operate your departure date then you may be asked to change to a different date and a full refund will be made available to you should this alternative not be suitable.

The currency in South Korea is the South Korean won, known as KRW. We recommend that you exchange your currency before you leave the UK.