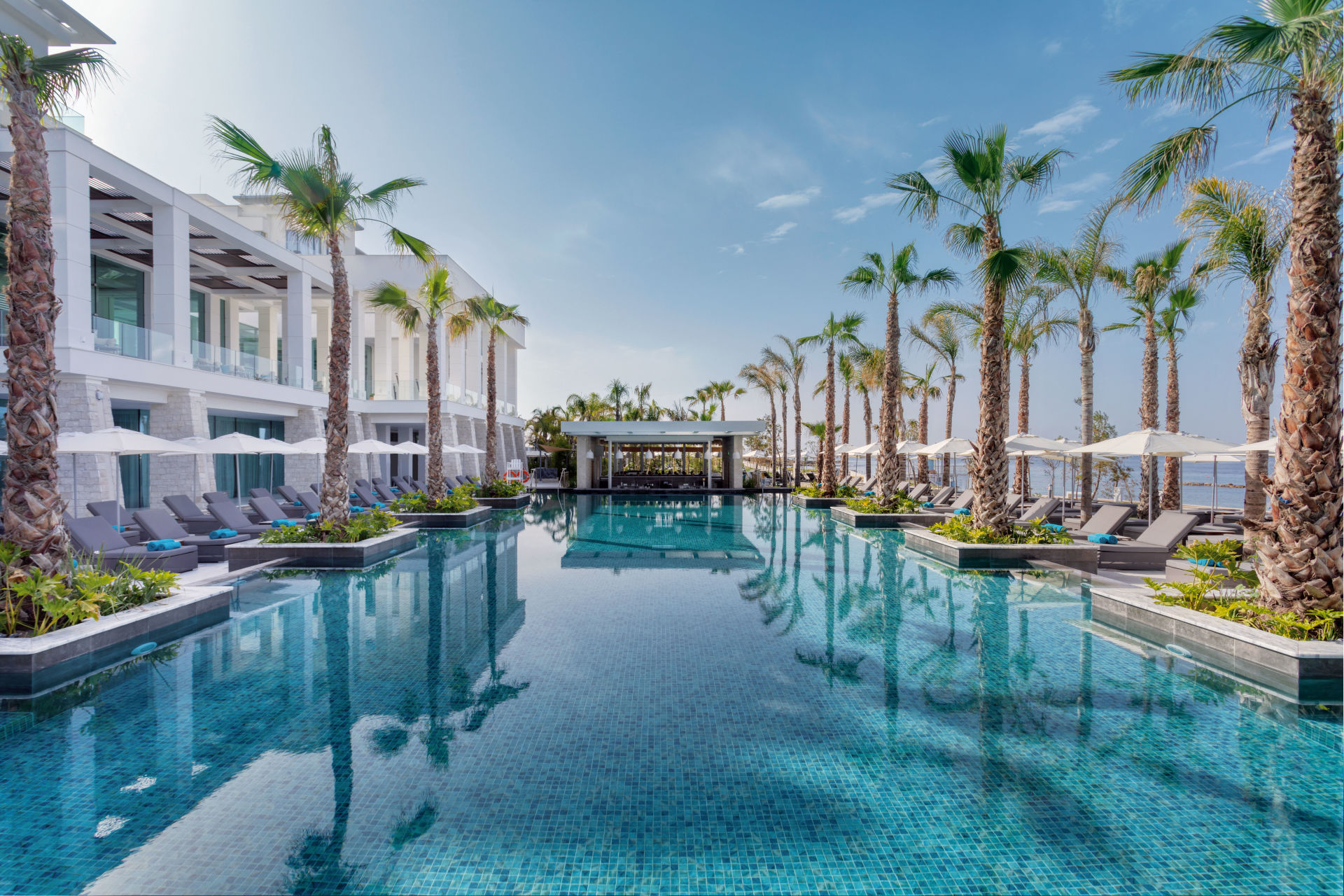 Set on the seafront of the sandy 'EU Blue Flag' beach overlooking the medieval Pathos Castle and just a short walk away from the nearest shops, night life and the tourist centre, Amavi is a beautiful harmony of panoramic views and practicality. Based here, you are sure to feel the charm, elegance and tranquillity that characterises this Mediterranean island.

Boasting 155 luxurious rooms and suites, each with unobstructed views of the sea, luxury and pleasure is in abundance. A unique dining experience, offering up a variety of intimate à la carte options compounds the stimulating sensory experience. The indulgence doesn't stop there; at the state-of-the-art spa and fitness centre you can take the time to pamper yourself and unwind some more.

All rooms and suites come with uninterrupted panoramic views of the Mediterranean Sea from the luxury of floor to ceiling, wall-to-wall glass balcony doors. An impressive amount of care and attention, ensures that you will feel very much at home during your time. Each type of accommodation comes with its own unique interior décor, along with contemporary bathroom, furniture and fittings designed to foster a boundless luxury and elegance.

The aesthetic pleasures of your new confines are coupled with cutting-edge technology and a host of in-room guest amenities that will ensure you derive maximum comfort during your stay.

Amavi Set on the seafront of the sandy 'EU Blue Flag' beach overlooking the medieval Pathos Castle and just a short walk away from the nearest shops, night life and the tourist centre, Amavi is a beautiful harmony of panoramic views and practicality. Based here, you are sure to feel the charm, elegance and tranquillity that characterises this Mediterranean island.

What an amazing hotel in the heart of Pafos. As a frequent traveller and lover of luxury hotels and design , i have been honestly impressed by all the facilities and services of Amavi . Its a real paradise for adults in a beautiful green environment . The restaurants of the hotel are sublime and the personnel is so kind and hospitable. Congratulations to Kanika group and to the general manager of the hotel Mr Charis Stylianou for an excellent job . Its the best choice for vacation for any tourist, whether foreign or local . Dont miss a stay at this superb hotel. We shall definetely be back soon

We visited the Amavi Hotel as a little break for my other halfs birthday. The hotel was wonderful! The staff were so friendly and nothing was too much for them. We had fantastic service at breakfast and at the pool bar...

The facilities were very good and the hotel is so modern. The room was beautiful with a great view of the sea. It was very clean and well maintained. I would highly recommend this hotel and we plan on staying there again.

Flawed Stay in a nice Hotel

We stayed in a Deluxe Room for 4 nights.

When we arrived in our room at the start, the air conditioning did not work (and had appearantly not been working for some time - how did nobody notice?) and the room felt like 40 degrees. We called the reception to let them know this and they said they will sent a mechanic to our room to fix it. 25 Minutes later (inbetween we tried calling again to ask where he is, because we were pretty much melting by now and the balcony with full-on sun and high humidity wasn't really better) the mechanic finally arrived and tried fixing it to no avail...

After another 25 Minutes of waiting for him to fix it we decided to go to dinner (in now sweated clothes), the mechanic said he would try to continue fixing it in our absence. After dinner the reception called on my mobile phone to let us know it isn't currently fixable and we were offered a new room, which we of course took.

The room itself was very nice all around, aside from a weird yellow-brownish stain on the inside of the bathroom door that was not removed during our 5 day stay. We did however not sleep well in the bed until maybe the last night. Two separate blankets instead of one big one was supplied quickly after requesting it from the reception. We received a bottle of red wine and a welcome fruit basket upon arrival in the room. The next day we found a letter with an apology for the air conditioning inconvenience and yet another "compensation fruit basket" next to the so far untouched welcome fruit basket. While it is a nice gesture per se, in my opinion it really did not make sense. If I see that the guests did not even touch the big welcome fruit basket yet, why would I choose yet another fruit basket as compensation for inconvience? In the end we only managed to eat half of one of the fruit baskets as we did not spend all day in the room eating fruit. A free drink voucher or adequate spa treatment discount would have been more appropriate.

The outdoor pool area of the hotel is very beautiful and both pools are niced, although the swim-up bar was unfortunately closed due to COVID19. It was nice that everyone had an assigned sunbed and received two free water bottles - although from a recycling perspective, maybe it would make more sense to offer a free drinkable water fountain or something instead of huge plastic waste. The food and drinks/cocktail prices in the pool area and hotel bar seemed a bit steep, but still okay. Cocktails were always very delicious. The indoor spa area has a pool, sauna and steam bath. It had a nice and calm atmosphere and we enjoyed it as a nice break from the brutal heat outside. There were however two oddities - the massage jets in the pool started sometimes and a sort of weird-smelling foam would come from it and remain for some time on the water surface, it seemed like something was wrong here. Also the steam bath did not work the first day, the following day either something was broken in the ventilation or they used some really weird oil because the smell was really off-putting and we only used the sauna, which had nice eucalyptus smell.

On the third day of our stay I entered our rooms' bathroom to find a giant cockroach crawling on the floor. Because I could deal with it, it crawled into a wall crevice beneath the sink. We called the reception who sent up room service but they said they can only smoke it out the next morning when we are gone because the spray is toxic and the room needs to be aired for two hours afterwards. The receptionist came up, seemed ashamed and apologlized a lot and offered us to sleep the night in a different room. However we declined because we did not want even more hassle with the room again. The next day there was no "compensation" for this yet another incident, which I found odd. Then again if it would have been just fruit basket #3 maybe it was better this way.

Breakfast was okay, although always the same with no variations and the special something was lacking, mostly in terms of additional dishes to be ordered - there were only eggs (benedict/florentine/royal), but from a hotel with such a good rating and 5* I would expect additional special dishes. Dinner was good, we were always in the buffet restaurant. However some of the dishes were not good, beef and sometimes also pork dishes were quite dry. Some of the bread/bakery was really stale, as if it was from the last day. What really bothered us was the offer of "better wine bottles" if we paid 25€ more. We already paid a lot for half-board premium and staff trying to upsell you on better wine seemed completely out of place and gave the impression as if the included wine was cheap or just mediocre or something. Overall we would've preferred if the buffet extended only to starters, dessert, cheese etc and ala carte main course. What stood out was "international night" on a friday which felt like remainders of the previous day thrown together. There was overall less on offer and on the entrance screen friday night was still advertised as "Indian Night" so maybe there was some short-term change, I don't know. What really angered us was that we were not able to use our two included ala carte dinners. We only wanted to use one and tried to reservate the asian rooftop restaurant 26 hours out, but they told us it was full. After welcoming us with a 40degree broken room and then having a cockroach in the second room you really could not make room for one extra table? Come on. This was really disappointing. We also did not get the two digestives that would've been included in the two alacarte dinners anywhere else. We did not ask but again in a 5* hotel with these ratings I'd expect not having to ask. Unfortunately during the last dinner we both got quite digestive problems so there might have been something off with one of the dishes (since it happened to both of us at the same time).

The Hotel interior (lobby, bar) and the hotel staff were very friendly and always helpful, aside from the mentioned criticisms. The beach is also conveniently close to the pool area, you are at the beach in 30 seconds just over a walkway.

If I was to rate it on a purely emotional level I'd give the stay itself a 3,5/5 because while they apologized for the flaws, these things still happened and the "compensation" did not feel adequate. Without these things I would give the hotel a 4,5/5 - not a perfect 5/5 because the food offering in my opinion was not quite up to that very high level. So overall I give it a 4/5.

A very enjoyable 4 nights stay at this lovely hote. Excellent service and excellent food. The perfect getaway for couples or singles...

Right on the boardwalk overlooking the sea. Three minutes from ten sunbed to the beautiful turquoise sea. 10 minute walk to Paphos harbour, to be fair we never left the hotel. Only down side, cats! Bit of a Cyprus thing I know but they could make an attempt to get rid of them.

The Best Hotel in Paphos

Even though hotels are closed at the moment, I wanted to take the time to write a delayed review of the Amavi Made for Two Hotel. On TripAdvisor it's currently no. 1 for hotels in Paphos and rightly so...

We visited just before Christmas last year and had a great time. The bedrooms are modern and well equipped and we had a lovely view of the incredible sunsets from our balcony. We made full use of the spacious ground floor lounge area enjoying drinks and tasty snacks from the helpful and friendly staff. Breakfasts are very good too - plentiful and wide ranging with your bacon or eggs individually cooked. The loungers are also worth mentioning - no early morning visits are necessary to reserve your lounger with a towel, as you are allocated loungers for your stay with a lockable safe and free water provided daily. A special mention for Katerina who took us on our trip to the Kato Paphos archaeological site - well worth a visit. The hotel is throroughly recommended for when Paphos opens up for business again.