Extend your stay in historic Malta with this 3-night add-on. Explore more of Malta's fascinating history in Valletta, go shopping in Sliema's many boutiques or simply relax, the choice is yours. 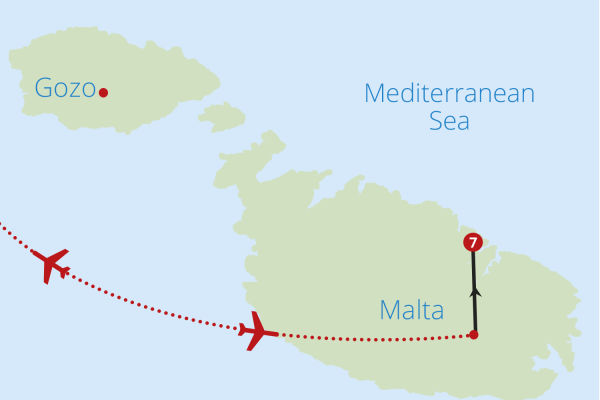 Depart London on a scheduled flight to Malta Airport. Upon arrival meet your guides and transfer to your hotel on the Sliema seafront.

Discover Malta's magnetic charm on a morning tour of the fortified city of Valletta. Boasting some of the most opulent churches and palaces in Europe, Valletta's quaint narrow streets exude a timeless ambience, and effortlessly transport you back to a bygone era. Soak in extraordinary scenery from the Upper Barrakka Gardens, delighting in breath-taking panoramas of the Grand Harbour, before continuing to the richly ornamented St John's Co-Cathedral in which Caraviggio's masterpiece, 'The beheading of John the Baptist' is lavishly displayed.

Today begins at the renowned Rotunda Church of Mosta, whose famed unsupported dome is the third largest in Europe. Later, protected by impressive city ramparts, the quiet streets of Mdina, lined with ornate buildings and palaces, are characteristic of this picturesque silent city. Dominating a landscape of narrow avenues, uncover the prominent baroque facade and towering bell towers of St Paul's Cathedral, before visiting an extensive complex of underground tombs at St Paul's Catacombs; these mystifying discoveries are considered to be the earliest archaeological indication of Christianity in Malta.

Enjoy a day at leisure today or embark on an optional excursion to the small fishing village of Marsaxlokk. Framed by a harbour teeming with brightly coloured boats, browse the vibrant market stalls and feast your eyes upon a plethora of local goods including fresh fish, honey and wine.

Discover Victoria's imposing citadel, winding streets and bustling market squares on a full-day tour of Malta's sister island, Gozo. From the capital city, travel towards the 'Inland Sea' of Dwejra to admire its breath-taking coastal formations and crystal-clear waters, before visiting the megalithic limestone temples of Ggantija; translating as the 'Place of Giants', according to local legend, this remarkable temple was constructed single-handedly by a giantress between the years of 3600-2500BC. En route to the seaside resort of Xlendi, enjoy an opportunity to shop for authentic handmade lace and knitwear items, which have long since characterised Gozo's craft trade

Collectively named Cottonera, explore the three fortified cities of Vittoriosa, Cospicua and Senglea, founded by the Knights of Malta in the 16th and 17th centuries. Begin this morning's walking tour in the oldest city of Vittoriosa, where the majestic former Palace of the General of the Galleys & Order of St John's Treasury can be seen from its affluent waterfront. Next, from the verge of Senglea point, delight in spectacular views of the Grand Harbour before cruising upon its azure waters. Step ashore for the chance to wander around an assortment of local shops before returning to your hotel.

Following a day at leisure, you may choose to embark on an optional excursion this evening. Bathed in a golden hue, explore some of Malta's most iconic landmarks, whose floodlit appearances present an entirely different display at night. Alternatively, immerse yourself in an energetic Maltese celebration, feasting on a delectable 4 course meal, followed by a traditional evening of folklore dance.

Day 8
Malta to the UK

After breakfast, transfer to the airport for your return flight back to the UK.

Enjoy an extended stay in Malta visiting this dynamic islands architectural and cultural wonders, from the Manoel Theatre in Valletta or see the Knights of St. John defended Christendom.

This day is yours to spend at leisure.

This day is yours to spend at leisure.

Today you will leave Malta and head back to the UK.

A visa is not required for your entry into Malta and Gozo. Further advice should be sought from the applicable tourist authority for other nationalities and for general queries. We strongly advise you check your destinations' Tourist Board or Embassy for the most up-to-date guidelines regarding passport validity.

Your flight is to Malta Airport with Air Malta (KM), departing from London Heathrow, Terminal 4. IMPORTANT: Flight times/numbers are for guidance only and are subject to change. Baggage allowance (per person): Each passenger is entitled to 20kg of hold luggage. Hand luggage: One piece not exceeding 5Kg and with maximum total dimensions not exceeding 113cm (50 cm x 45cm x 18cm). Should you wish to take additional luggage you will need to pay extra at check-in. IMPORTANT: Please note that final flight details will be confirmed on your final documentation which will be sent to you approximately 10 days before departure. A printed E-ticket is no longer required at check-in, all you need to do is present your passport to the staff at the desk and your boarding pass will be given to you.

This tour is accessible to most people with an average level of fitness and normal mobility. It involves full days of sightseeing, often on foot and includes some climbing of stairs and getting on and off coaches and boats. This tour is not suitable for anyone with walking difficulties.

The main tour is a fully escorted with local guides throughout ensuring that you have first-hand knowledge at all times. Accommodation and transfers are included for the Historic Malta extension but there is no guide so your time will be free.

The currency in Malta and Gozo is the Euro. You can exchange your currency before you travel, or whilst you are in Malta and Gozo. Cash machine will be available throughout your tour for you to withdraw money in the local currency.

You will need to take some extra money with you to cover any lunches where these are not mentioned on your itinerary and personal purchases, such as souvenirs, laundry and extra drinks and snacks. Approximately £100-£200 will be sufficient for the duration of the tour, depending on how much of a bargain-hunter you are!