Tucked away against a lush green backdrop, Kandy and the Central Hilly Country is the epicentre of Sri Lanka’s Buddhist culture. It is also fabulous in its architecture; palaces, royal parks, a handsome bathing house (for all the king’s queens!), and a vast complex of temples, built five centuries ago to house a single tooth (albeit a rather important tooth belonging to Buddha). The Temple of the Tooth Relic is one of the most sacred places in the Buddhist world and was declared a World Heritage Site by UNESCO in 1988.

It was at the Temple of the Tooth that a treaty was signed in 1815, handing Sri Lanka into the hands of the British and ending 2,500 years of Sri Lankan monarchs. The last King, Rajasinha, lived in a comfortable exile until his death in 1832. By then the colonial transformation of Kandy was well underway and the townscape changed dramatically. That architectural legacy is there for all to see today.

Kandy is Sri Lanka’s second-largest city and capital of the central province. It is also the gateway to the Central Highlands and the amazing tea plantations – another legacy of British colonial rule.

The Temple of the Tooth Relic

The golden-roofed Temple of the Sacred Tooth houses Sri Lanka’s most important Buddhist relic – a tooth of the Buddha. During puja (prayers and offerings, the heavily guarded room containing the tooth is open to devotees and tourists. However, you don’t actually see the tooth. It is kept in a gold casket inside of which are six more gold caskets of diminishing size. As well as the revered main temple, the complex includes a series of smaller temples, shrines and museums. Visitors are requested to remove shoes and wear clothes that cover the legs and shoulders. 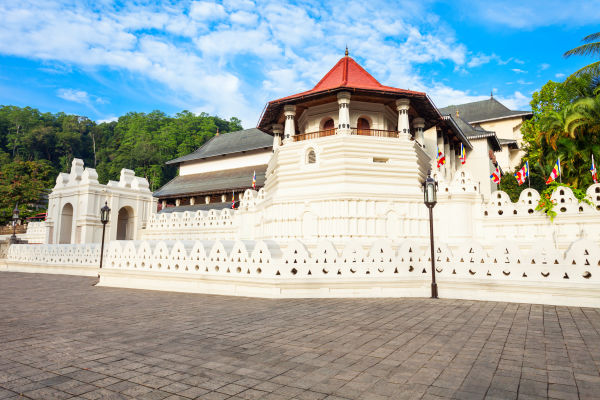 The beautiful artificial lake in front of the Temple of the Tooth was built in 1807 by the last Sri Lankan monarch, King Sri Wickrama Rajasinghe. A leisurely stroll around its 3.2km circumference, with a few stops on the lakeside seats, it is a pleasant way to spend a few hours. The island and pavilion in the middle of the lake were first used as the Royal Summer House for the Queen and her courtiers to relax. The British later used it as an ammunition store and added a fortress-style parapet around it.

The Royal Palace Park (also known as Wace Park) overlooks Kandy Lake and most of the city. The Japanese Field Gun in the park was presented to the city of Kandy by Lord Mountbatten after it was captured by the British 14th Army in Burma in World War II.

Five km to the west of Kandy is the Royal Botanical Garden at Peradeniya, extremely popular with visitors to Kandy. Extending to 147 acres it is the island’s largest botanical garden and home to over 4,000 species of plants.

Just north of Kandy Lake is a protected sanctuary known as Udawattakelle (Udawatta Forest). With soaring redwood trees and giant bamboo it is a haven of endemic birds and green darkness… just minutes from Kandy city centre.

The keywords for visitors to Sri Lanka, and particularly in the Buddha-oriented city of Kandy, are modesty and respect. For example