Extend your stay in Jordan with a beach break and relax in the beautifully serene surroundings, flanked by mountains to the east and the rolling hills of Jerusalem to the west. Situated over 400 metres below sea level in a remarkable landscape, the Dead Sea is the lowest point on earth. The land-locked waters of the Dead Sea evaporate to leave a dense, rich cocktail of salts and minerals, supplying industry, agriculture and medicine with some of its finest products. 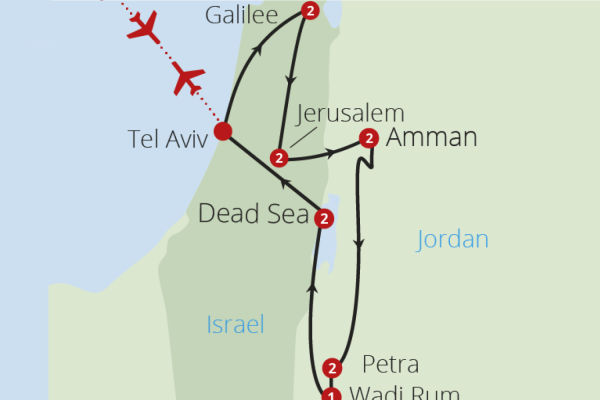 Depart London on your scheduled flight to Tel Aviv. On arrival, you will be met and transferred to your hotel in picturesque Galilee.

The Sea of Galilee is home to some of Christianity and Judaism's most important sites; the area around this lake also offers rolling hills, valleys and quaint, small towns. Enjoy a day exploring the biblical sites of this region, set against this picturesque backdrop. Sail the Sea of Galilee as you cross these waters by boat to the ruins of the former fishing village of Capernaum, once home to the apostles Simon, Peter, Andrew, James and John. Continue onward to the secluded site of the feeding of the 5,000 before visiting the Mount of the Beatitudes, where Christ gave his Sermon on the Mount. Today, the site is a tranquil garden with a Byzantine church featuring stained glass depictions of the eight beatitudes and sweeping views over the lake and countryside. This afternoon a tour of a local kibbutz gives you a chance to witness this unique, communal style of living and learn more about the values of social equality and shared ownership that underpin these communities.

Depart Galilee for Jerusalem, stopping en route in Nazareth where you can wander the cavernous interior of the Church of Annunciation, believed to be the home of the Virgin Mary. Continue north to the extensive archaeological ruins of Bet Shean, best known as the site where King Saul was killed by the Philistines. Explore the fascinating excavations peppered throughout the area, which include amphitheatres, bathing houses and pagan temples. Continue to Jerusalem, passing through the fertile plains of the Jordan Valley, dotted with palm-filled date farms.

Churches, mosques and synagogues lie side by side in Jerusalem, a site of spiritual significance for three of the world's major religions. On today's tour, follow a part of the path Jesus took to his crucifixion as you walk the Via Dolorosa, a winding street that leads to the Church of the Holy Sepulchre. A visit to this church gives you access to two of Christianity's holiest sites - the hill of crucifixion and the tomb where Christ was buried and resurrected. Journey through Kidron Valley along the route of Jesus' flight to the Mount of Olives, as you make your way to the centuries-old religious monuments of Temple Mount, including the gleaming, golden Dome of the Rock - an Islamic shrine and important pilgrimage site. Continue onward and join the pilgrims fervently praying at the Wailing (or Western) Wall. In the afternoon visit the Yad Vashem Holocaust Museum where you will gain insight into the experiences of the Jewish people during World War Two. The nine galleries of the museum display photographs, films, documents, letters, works of art, and personal items found in the camps and ghettos of Nazi Germany.

Drive to the Allenby Bridge where you will cross from Israel into Jordan.

A morning tour of Amman's historic downtown area takes in the cultural artefacts of the Archaeological and Folklore Museums, the hilltop ruins of the Citadel, the mosaic dome of the Blue Mosque and the vast ruins of the Roman Amphitheatre. Continue to the ancient city of Jerash which teems with well-preserved Roman ruins. Witness its longstanding theatres, soaring hilltop temples, and spacious public squares and plazas before returning to your hotel in Amman.

Set out for the city of Madaba, famous for its 6th century map of Jerusalem and the Holy Land as well as its spectacular Byzantine and Umayyad mosaics. Travel onward to Mount Nebo, renowned as the biblical city where Moses was granted a view of the 'Promised Land' that he would never enter. From here, journey south to explore Al Karak's imposing 12th-century crusader's castle before continuing to Petra for your overnight stay.

Today's exploration of the awe-inspiring city of Petra starts with a dramatic entry through a long, narrow gorge flanked by soaring cliffs. Pass dazzling rock formations before the final turn opens to a view of the iconic 2,000-year-old facade of the treasury. Believed to be a royal tomb, the impressive rock-hewn site may be recognised from the film 'Indiana Jones and the Last Crusade'. Continuing deeper into the ancient city, you'll have a full day to explore its elaborate, rock-cut tombs, temples, sacrificial altars and Roman-style theatres.

After breakfast, visit Al Beidha, known as 'Little Petra' for the similarity of its rock-cut tombs and structures. Witness centuries-old dining halls, washrooms, fountains and rooms which are skilfully hewn into the stone. Next, travel further south to the undulating desert dunes of Wadi Rum where you'll embark on a scenic jeep safari. Described by T.E Lawrence as 'vast, Home to a host of iconic sights such as Petra, Jerusalem and Nazareth the area is also blessed with stunning desert landscapes, the vibrant colours of the Dead Sea and picturesque Galilee echoing and god-like', the locals refer to the untamed sea of red sand as the 'Valley of the Moon'. Soak in the breath-taking crimson mountains, canyons and dunes and overnight in a desert camp.

Transfer from Wadi Rum to the Dead Sea. A day at leisure provides the perfect opportunity for relaxation or a trip to the shores of Dead Sea where you can float on its salty waters and cover yourself in its rejuvenating, black mud.

Take another day to relax on the Dead Sea or explore this area of incredible colour and beauty.

After breakfast, transfer to the airport for your return flight to the UK.

Continue your stay by the Dead Sea at leisure.

Relax and unwind at your own pace at your chosen hotel.

Following breakfast transfer back to Amman for your return flight to the UK.

The hotels listed below are provided for guidance only and final confirmation of your accommodation will be sent to you approximately 90 days before you travel
Crowne Plaza Dead Sea Resort and Spa
2 nights
Dead Sea, Jordan
More details
The Lake House
2 nights
Galilee, Israel
More details
View More

UK passport holders are not currently required to obtain a visa prior to travel. You will be issued with a visa from the representative on arrival into Jordan free of charge. If you are adding the Holy Land extension to the end of your tour you will need pay for a visa on arrival at a cost of JOD 40.00 along with a departure taxes of USD 15.00.

All flights are operated by Royal Jordanian Airlines. Each passenger is entitled to 20kg of hold luggage plus one item of hand luggage not exceeding 8kg in weight and 23cm x 40cm x 55cm in size. Flight times are for guidance only & subject to change.

We recommend that you consult your local GP for advice on vaccinations and travel health before your departure.

This tour is accessible to most people with an average level of fitness and normal mobility. It involves full days of sightseeing, often on foot, and includes some climbing of stairs and getting on and off coaches. This tour is not suitable for anyone with walking difficulties.

This is a fully escorted tour, meaning that you will be met on arrival by your local guide who will remain with you for the duration of your trip, ensuring that you have first-hand knowledge at all times.

The currency in Jordan is the Jordanian Dinar, known as JOD. We recommend that you exchange your currency before you leave the UK. US Dollars are also widely accepted in Jordan should you wish to keep an alternative currency on you.

You will need to take some extra money with you to cover any personal purchases, such as souvenirs, laundry and extra drinks and snacks. Approximately £300 will be sufficient for the duration of the tour, depending on how much of a bargain-hunter you are!